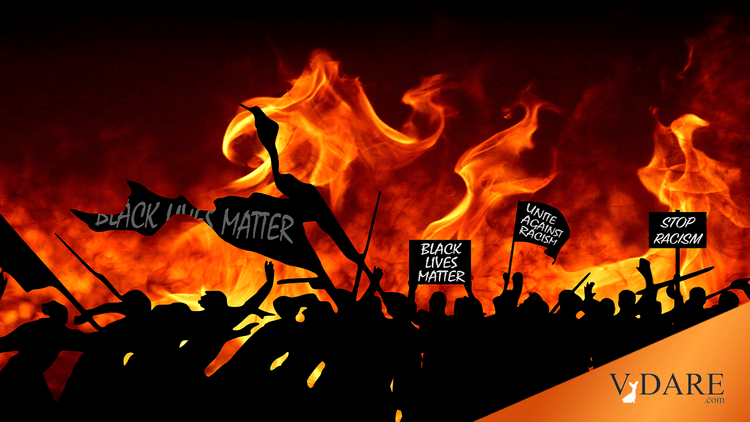 Michelle Malkin: One Nation Under Anarcho-Tyranny

The America you grew up in is not the America we live in now.

One nation under God? Ha.

Land of the free? Ha.

Equal protection under the law? Ha.

The right to bear arms? Ha.

It's not "socialism" or "communism" under which we suffer. Our dangerously chaotic, selectively oppressive predicament is more accurately described as "anarcho-tyranny." The late conservative columnist Sam Francis first coined the term in 1992 to diagnose a condition of "both anarchy (the failure of the state to enforce the laws) and, at the same time, tyranny—the enforcement of laws by the state for oppressive purposes."

The "criminalization of the law-abiding and innocent," Francis expounded, is achieved in such a state through: "exorbitant taxation, bureaucratic regulation; the invasion of privacy, and the engineering of social institutions, such as the family and local schools; the imposition of thought control through 'sensitivity training' and multiculturalist curricula; 'hate crime' laws; gun-control laws that punish or disarm otherwise law-abiding citizens but have no impact on violent criminals who get guns illegally; and a vast labyrinth of other measures." [Synthesizing Tyranny by Samuel Francis, Chronicles, April 2005]

The toxic combination of "pandemic panic" and "George Floyd derangement syndrome" has thoroughly destroyed the home of the brave. It is a paradise for the depraved and dictatorial.

Anarcho-tyranny is how hoodlums can toss statues into rivers with impunity, while citizens disgusted by Black Lives Matter street graffiti are charged with "hate crimes"—as David Nelson and Nicole Anderson in Martinez, California, were by a George Soros-funded district attorney two weeks ago.

Anarcho-tyranny is how rioters can shut down highways and byways on a whim without fear of arrest, while commuters trying to escape the window-smashing barbarians obstructing traffic are charged with "assault"—as poor Jennifer Watson of Denver, Colorado, was this week.

Anarcho-tyranny is how 1,000 black militia members can take over the streets in Georgia and point their guns at motorists as they demand reparations, while white citizen militia members in Idaho, Utah and New Mexico have been smeared publicly as racists and face injunctions for peacefully defending their neighborhoods.

Where do the police stand in this regime? It pains me to say it, but those of us who have backed the blue so loyally and vocally can no longer do so under the assumption that the blue will back us.

It's rank-and-file cops who are issuing citations to citizens who want to breathe freely.

It's rank-and-file cops who are standing by while our monuments and courthouses and landmarks are burned and obliterated.

It was rank-and-file cops in Denver who watched as my patriotic friends and I tried to hold a Law Enforcement Appreciation Day this past Sunday and were besieged by Black Lives Matter and antifa thugs who had declared that their sole intent in invading our permitted celebration was to "shut us down." I livestreamed the chaos as pro-police attendees were beaten, including the organizer Ron MacLachlan, who was bloodied in the face and head just a few feet from me by black-masked animals. One antifa actor wielded her collapsible baton just inches from me.

The cop-haters had obstructed traffic on their five-minute march from their unpermitted event at the Colorado State Capitol to our permitted space.

Unprovoked, the cop-haters blared airhorns, sprayed our faces (mine included), burned an American flag, punched, shoved and menaced and took over our stage.

The Denver police chief, Black Lives Matter champion Paul Pazen, has repeatedly and publicly blamed us—the law-abiding—for not having enough private security in place, even as he admitted that 76 officers had been injured by the "peaceful" agitators who have turned our capital into a heathen hellhole (and perpetrated more than $1 million in property damage so far).

If we had brandished or used our weapons in self-defense, we'd be facing felony assault charges—as armed citizen Steven Baca is in Albuquerque, New Mexico, at the hands of another Soros-subsidized district attorney.

If any of our men had tried to peel the female antifa thugs off of MAGA ladies who were assaulted, they'd be charged with battery, too—just like Baca.

On Tuesday morning, a Denver police union official called me to apologize for the department's failure to protect those of us who tried to speak on their behalf. The "backlash" for defending our constitutional rights was too high a price to pay, he told me. Sorry.

So the message is loud and clear. When push comes to bloody shove in end-stage America, under the rule of the anarcho-tyrants, we, the law-abiding, are the enemy. Those in uniform sworn to protect and serve will turn their backs on us because their bosses don't answer to the public. They protect and serve the mob.