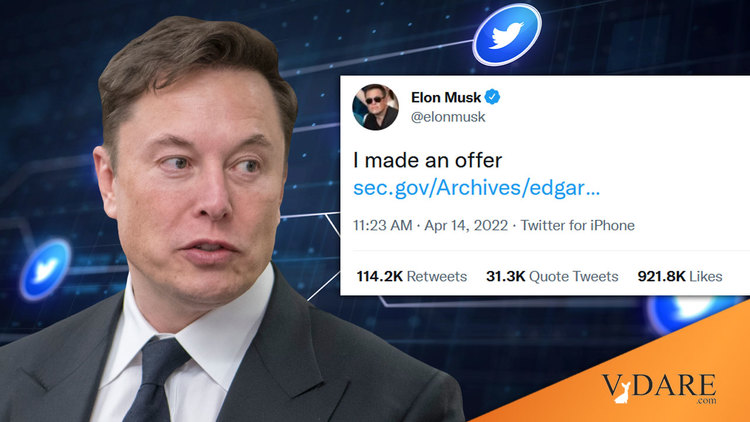 Musk Takes Twitter. Is Left Right To Be Terrified?

Earlier: Ellen K. Pao In Jeff Bezos' WASHINGTON POST On Elon Musk: We Must "Prevent Rich People From Controlling Our Channels Of Communication"

As a Twitter shareholder of record since late 2018, when the stock was trading around $28 per share, I am naturally delighted by Elon Musk’s dramatic $54.20 per share takeover of the social media platform, which he says he intends to take private [Elon Musk acquires Twitter for roughly $44 billion,  by Douglas MacMillan,  Faiz Siddiqui,  Rachel Lerman and  Taylor Telford, Washington Post, April 25, 2022].

I’m even more delighted by the Ruling Class reaction: free speech on the platform will be antidemocratic and the free flow of information might come to a grinding halt. The same people didn’t think that when Amazon bazillionaire Jeff Bezos bought the Washington Post to ensure that democracy doesn’t “die in darkness.”

The good thing is, Musk is buying Twitter, he says, to keep it a free marketplace of ideas, including those that these communist commissars want banned. The bad thing is, no one knows how he’ll change its culture of repression, or whether he will permit the anonymous accounts that protect dissidents from reprisals

Never before has the power of a statement made in 140 characters or less exposed the fragility of what many on the Right derisively call The Global American Empire. Our rulers, no longer worrying being constrained by the dead letter known as the U.S. Constitution, believe they have carte blanche to control the free flow of information, censoring any individual or even news organization they see fit (the Hunter Biden laptop story from the New York Post), and they realize what Musk’s bid to acquire Twitter and restore free discourse means.

The popular Twitter user, Auron MacIntyre, compiled a breakdown of the most revealing Leftist tweets about Musk’s purchase of Twitter. Two samples:

Today on Twitter feels like the last evening in a Berlin nightclub at the twilight of Weimar Germany.

I am frightened by the impact on society and politics if Elon Musk acquires Twitter. He seems to believe that on social media anything goes. For democracy to survive, we need more content moderation, not less.

Elon Musk’s real goal has nothing to do with the freedom of others. His goal is his own unconstrained freedom – the freedom to wield enormous power without having to be accountable to laws and regulations, to shareholders, or to market competition. https://t.co/EYtkaMcH2d

Musk’s move to buy Twitter does not mean he is our guy, even if one does wonder what the South African –born entrepreneur thinks about post-Apartheid South Africa. But then again, he’s not not our guy. His enemies are our enemies, the very Tech Totalitarians who have silenced important voices on the right: Alex Jones to Laura Loomer to Jared Taylor to Stefan Molyneux.  (VDARE.com is still on Twitter, probably because it has pulled its punches, but has been banned by Facebook, PayPal, Amazon etc.) Yet such personalities had audiences an order of magnitude greater than Warner Media’s $300 million failed CNN+ could muster. That effort sank like a rock just a month after start-up. Fewer than 10,000 people were interested [CNN+ fails, shut down after only one month, SaraCarter.com, April 21, 2022].

At the end of 2021, Musk correctly called “Wokeness” a “mind virus” that threatens civilization. Bonus: He said it during an interview with the Babylon Bee, the right-of-center, Christian satire site that Twitter banned for poking fun at Biden’s No. 2 health official, “Admiral” Richard “Rachel” Levine, a man who pretends he is a woman.

The Babylon Bee is a satirical website, similar to The Onion, which Musk noted has become “politically correct.” During his interview, Tesla and SpaceX CEO noted that a tendency to become politically correct may be counterproductive, as represented by the emerging “woke culture.” According to Musk, “wokeness” is a “mind virus” that could become “arguably one of the biggest threats to modern civilization.”

“Wokeness wants to make comedy illegal. Do we want a humorless society that is simply rife with condemnation, and hate? At its heart, wokeness is divisive, exclusionary, and hateful. It basically gives mean people a shield to be cruel, armored in false virtue,” Musk said.

Were it not for Twitter in 2015 and 2016 and free speech across Big Tech platforms, Donald Trump would not have been elected. Nor would he have been defeated in 2020 if not for Big Tech’s censorship. Time’s Molly Ball even bragged about the underhanded collusion to elect Joe Biden [The Secret History of the Shadow Campaign That Saved the 2020 Election, February 6, 2021]. Such was the hatred for Trump and his backers that Facebook tycoon Mark Zuckerberg spent more than $400 million to manipulate elections in 2020 [How 'Zuckerbucks' helped swing the 2020 election for Biden: Facebook CEO funneled $419M into 'nonprofit' local election admin boards 'to help turn out likely Democratic voters', by Alyssa Guzman, Daily Mail, October 14, 2021].

Message from the Left: Zuckerberg’s influencing elections is saving democracy; Musk’s buying Twitter will destroy it even though he proposes to allow more free speech.

JUST IN - WarnerBros Discovery terminates CNN+ streaming service at the end of this month, failed after just 21 days.

Like Joe Rogan, another free-speech champion the Left attacked with its customary brio partly because he challenged the Flu Manchu narrative, Musk knows the game is rigged against free speech, which those of us who defend the Historic American Nation must have to fight those pushing for The Great Replacement.

One worrisome note. Twitter users are worried that Musk will ban anonymous accounts, which are crucial to those who wish to speak freely without having their lives wrecked by crazy Leftists who call employers and threaten families. Verifying accounts and dumping spam bots and obvious scammers is one thing. But stopping good Americans from speaking freely by banning anonymous accounts simply isn’t acceptable.

And authenticate all real humans

In some sense, then, Musk’s fight is our fight. His acquiring Twitter and taking it private will be one small step forward in the battle for restoring Western civilization, but a giant leap against the Wokeness that now controls the Regime MSM and corporate America.

Jack Dalton [Email him] is a recovering conservative.