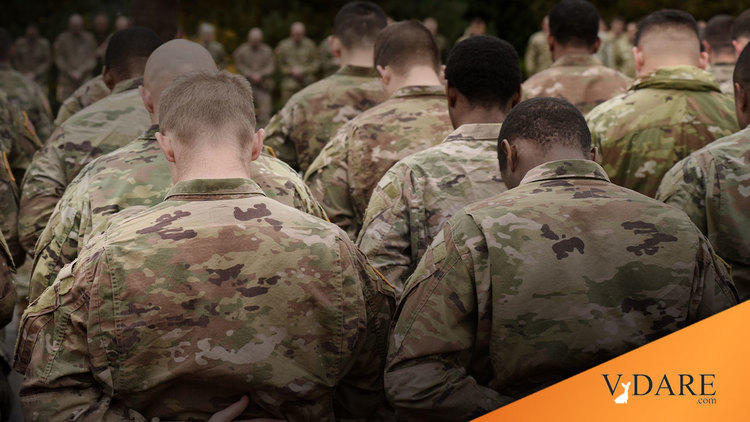 [See also Race Relations: The Myth Of The Military Model, by Steve Sailer]

Are minorities overrepresented in the volunteer army? That claim is often expressed in the Mainstream Media. It was hammered home ad nauseam in Michael Moore's Fahrenheit 9/11. New York Representative Charles Rangel openly advocates a return to the draft on the grounds that "It shouldn't be just the poor and the working poor who find their way into harm's way." [The Return Of The Draft, Rolling Stone, January 27, 2005]

Funny: I watch network news nearly every night, but I've not seen many soldiers of color on the Iraq segments. Most of those guys in Hummers, or recuperating at Walter Reed, look like the boy next door in my Indianapolis suburb.

And DOD statistics  confirm this: 74.4 percent of U.S. military deaths in Iraq, and 73.0 percent of the wounded, are white. Blacks and Hispanics make up 9.7 percent and 10.8 percent of the dead, respectively. (Table 1.)

To be sure, whites accounted for a significantly larger share of battlefield deaths in Korea and Vietnam—but their share of the U.S. population was greater at that time too. (Table 2.)

A Heritage Foundation study released last October compared the demographic characteristics of recent military recruits with the total U.S. population. We present some of their data, along with DOD statistics on U.S. military casualties by race, in Table 3. [Who Are the Recruits? by Tim Kane, Ph.D. Center for Data Analysis Report #06-09]

In 2004 about three-quarters (75.6 percent) of the adult population, and 73.1 percent of recruits, were classified as white. This indicates a population/recruit ratio of 0.97—with 1.00 indicating an exactly proportional representation. The casualty/population ratio for whites is also 0.97.

Bottom line: whites are proportionately represented among both recruits and casualties.

The same pattern holds for Hispanics, although they may be undercounted in DOD casualty figures due to a reluctance to identify themselves by ethnicity.

Asians are underrepresented both among recruits and, more dramatically, among casualties.

(Note that because of typical official obscurantism about race, Hispanics are often double-counted, because they can be of any race. What we really need to refute Rangel is the "white non-Hispanic" military death rate, but this is not provided. However, we can infer that it may above the white non-Hispanic share of the population from the fact that "non-Hispanics" constitute 85.9 percent of the overall population and 93.12 percent of the combat death.)

This bifurcation does not impugn the bravery of Black and Hispanic soldiers. Rather it points out the opportunities the volunteer army affords minorities.  College-educated Blacks, for example, make up 12 percent of the officer corps, yet only 7.6 percent of college graduates are Black. Black enlisted men are under-represented in the military and Special Forces, and over-represented in logistical support and administrative occupations—skills that are valued in the civilian world. A draft would obliterate those advantages.

So which racial groups are disproportionately casualties of the Iraq war?

Native Hawaiian and Pacific Islanders are the most likely to be killed or wounded. They account for 1.02 percent of Iraq casualties, 4.5-times their population share. They also volunteer at far greater rates than other races.

Second place goes to American Indian/Alaska natives, whose share of the dead and wounded is 1.36-times their share of the population.

But the numbers involved are very small. Neither group is large enough to provide a significant share of soldiers.

Note, however, that both groups inhabit sparsely populated, predominately rural, regions of the country—and that, rather than race per se, may be the key.

The urban/rural death gap is the subject of a study sponsored by the University of New Hampshire's Carsey Institute, which specializes in overlooked parts of the country. Among the findings: "The death rate for rural soldiers (24 per million adults aged 18 to 59) is 60 percent higher than the death rate for those soldiers from cities and suburbs (15 deaths per million)." [William O'Hare and Bill Bishop, "U.S. Rural Soldiers Account for a Disproportionately High Share of Casualties in Iraq and Afghanistan," Carsey Institute, Fall 2006. PDF]

One of the study's authors, demographer William O'Hare, is quoted:

"…..The opportunity differential between rural and urban America is probably higher now than at any time in the past. Our study highlights the price some young folks and their families are paying for lack of opportunity in rural America." [Rural America Pays the Price for War in Iraq, Alternet.org, By Tom Engelhardt, January 27, 2007]

Unfair? Maybe. But it's the economy, not race, stupid.