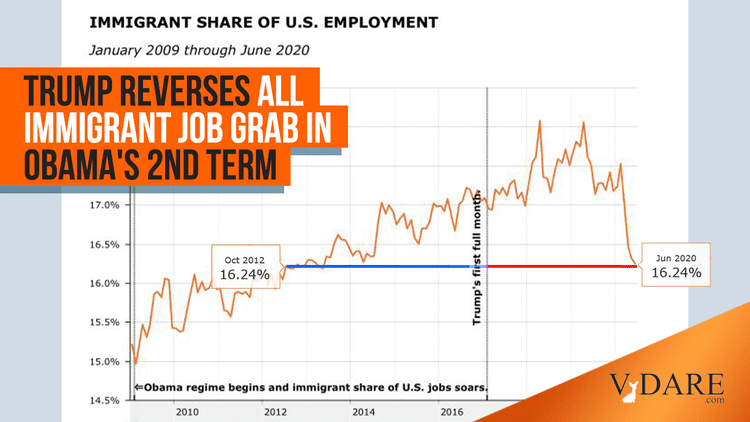 Much to the horror of the Dem/Main Stream Media Complex, June’s job data seemed to confirm that a “V-shaped recovery” is underway. And, even more significant from VDARE.com’s standpoint: Both the immigrant workforce population (legal and illegal, federal data does not distinguish) and immigrant displacement of American workers continue their remarkable collapse. This is developing into a major, if unreported, Trump triumph—but it must be locked in, at least by prolonging the temporary immigration moratorium he finally enacted June 22.

U.S. payrolls grew by 4.8 million in June, according to the BLS. This was the second straight month of remarkable gains after a loss of 20 million in April, when a large share of the working age population hunkered down in self-quarantine. The unemployment rate in June fell to 11.1%, down from a peak of 14.7% in April.

There are still nearly 15 million fewer jobs in June than in February, before the pandemic forced businesses to close. However, in May, 3.8 million jobs were created. When added to June’s gain, about 9 million jobs lost during the pandemic have already been restored. If monthly job gains continue at this rate, we will recover all the pandemic-related job losses within 3 to 4 months.

Our analysis of the “other” employment survey, of Households rather than businesses, which reports immigration data, uncovers an even more robust picture for June: Employment as measured by the Household Survey jumped by 4.94 million.

At 98.8, the June index reading indicates that 1.2% fewer native-born American workers held jobs last month than in Obama’s last year in office. But the New VDARE American Worker Displacement Index (NVDAWDI), our name for the ratio of immigrant to native-born American employment growth indexes since Jan. 2009, fell to 108.0 in June, down 0.6% from May’s 108.6.

Not since May 2013 has VDARE.com’s Displacement Index been this low.

Displacement is down partly because the immigrant working-age population is falling and those immigrants who remain are losing jobs even faster than native-born workers.

All other things being equal, each 1% decline in immigrant employment share represents a transfer of about 1.4 million jobs from immigrants to native-born American workers.

June also saw another near record decline in the foreign-born working-age population (16 years+). It fell by 1.018 million from June 2019—the tenth straight month of year-over-year decline. This contraction follows a protracted slowing of immigrant workforce growth that can be traced back to early 2018.

This current immigrant workforce decline is now more than double that seen in the 2008 Great Recession. Back then immigrants were leaving at the rate of 300,000 to 400,000 a month, year-over-year. And it exceeds the “Trump Effect” seen in the early months of the administration, when illegals apparently self-deported out of fear.

This process was underway well before the pandemic hit. It has to be counted as a significant Trump achievement—a “Trump Triumph,” as we labelled it on our featured chart last month.

A detailed picture of how American workers have fared vis-à-vis immigrants over the past year is published in Table A-7 of the monthly BLS Report:

Immigrant LPRs remain above that of Americans but, unlike the case in good times, this factoid reflects an immigrant labor force that is contracting about five times faster than that of native-born Americans, rather than increased confidence in the job market.

Of course, a continued V-shaped recovery depends on some big “ifs.” The latest survey was completed in mid-June, before coronavirus cases began to spike in Arizona, Florida, and several other states.

Nevertheless, President Trump rightly called the report “spectacular” in a news conference shortly after the BLS numbers were released. “We’re in a very deep hole, and we just set ourselves back again.” [U.S. Added Nearly 5 Million Jobs in June, NYT, July 2, 2020 ]

But the benefits of that “spectacular” comeback will go to immigrants from everywhere in the world, as in the rebound from the 2008 Great Recession, unless they are channeled to American workers via an immigration moratorium NOW.

In normal times about 300,000 working-age immigrants leave the country voluntarily. With immigrant job loses high in the pandemic, this number is undoubtedly larger today—but as economic recovery takes hold, they will try to return. This presents Donald Trump with a great opportunity: he can lock in the recovery’s benefits for the American worker—and stem recent immigration’s damage to the GOP—if he acts on his instincts and imposes a permanent immigration moratorium.