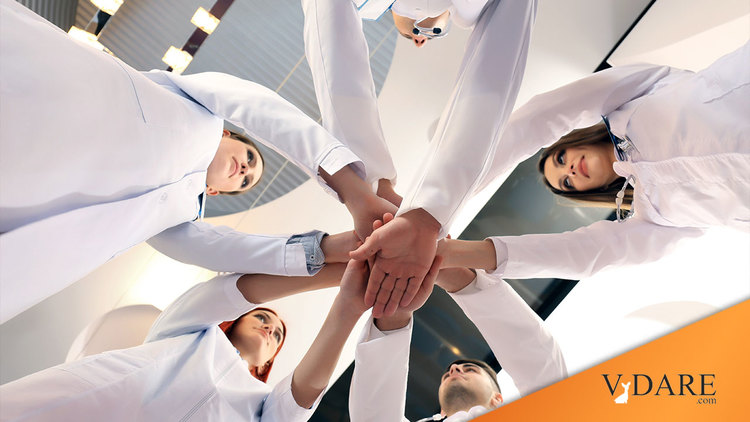 Lights, camera, agitprop! The curtains opened on yet another artfully staged performance of Obamacare Theater this week. One hundred and fifty doctors took their places on the plush lawn outside the West Wing—many acting like "Twilight" groupies with cameras instead of credible medical professionals. The president approved the scenery: "I am thrilled to have all of you here today, and you look very spiffy in your coats."

White House wardrobe assistants guaranteed the "spiffy." As the New York Post's Charles Hurt reported, the physicians "were told to bring their white lab coats to make sure that TV cameras captured the image." President Obama's aides hastily handed out costumes to those who came in suits or dresses before the doc-and-pony show began.

But while Halloween came early to the Potomac, these partisan single-payer activists in White House-supplied clothing aren't fooling anyone.

Obama's spin doctors belong to a group called Doctors for America (DFA), which reportedly supplied the white lab coats. The White House event was organized in conjunction with DFA and Organizing for America, Obama's campaign outfit.

OFA and DFA are behind a massive new Obamacare ad campaign, letter-writing campaign and doctor-recruitment campaign. The supposedly "grassroots" nonprofit DFA is a spin-off of Doctors for Obama, a 2008 campaign arm that aggressively pushed the Democrats' government health care takeover. DFA claims to have thousands of members with a "variety of backgrounds." But there's little diversity in their views on socialized medicine (98 percent want a taxpayer-funded public insurance option)—or in their political contributions.

DFA vice president Dr. Alice Chen [Email her]of Los Angeles is an Obama donor and avowed supporter of Organizing for America, Obama's campaign shop run by the Democratic National Committee. On Monday, she posted on the OFA website with an appeal to Democratic activists for letters to the editor in support of Obama's "health care reform."

DFA "senior adviser" Jacob Hacker  [Email him] is an Obamacare architect who laughed at criticism of the plan being a Trojan horse for single-payer coverage. "It's not a Trojan horse, right?" he retorted at a far-left Tides Foundation conference on health care. "It's just right there! I'm telling you. We're going to get there."

And here's a brief political donation history of other top DFA docs compiled by Brian Faughnan at theconservatives.com:

Who unveiled Doctors for America earlier this spring? No, not ordinary citizens outside the Beltway. The decidedly un-grassroots sponsors of the Doctors for America launch were Democratic Sen. Max Baucus, chair of the Senate Finance Committee, and the left-wing Center for American Progress, which is run by liberal operative John Podesta and underwritten by far-left billionaire George Soros.

CAP is a lead organization in the Health Care for America Now coalition, the so-called "grassroots" lobbying group for Obama's health care takeover legislation run out of 1825 K Street in Washington, D.C., with a $40 million budget. CAP is also the parent group of Think Progress, the far-left website leading the smear campaign against fiscally conservative activists who protested at congressional town halls this summer. And several CAP alumni are now leading the Obamacare push at the Department of Health and Human Services, including special HHS assistant Michael Halle and HHS Director Jeanne Lambrew, a former senior fellow at the Center for American Progress who worked on health policy in the Clinton administration.

It's all in keeping with the elaborate Kabuki productions that have marked Team Obama's efforts to manufacture support for government-run health care. They've been doctoring it up from Day One.