Even in an age that prizes “equality” above all other taboos, some victims are more equal than others.

In late January, women’s rights campaigners in the United Kingdom hailed new guidance for police officers that would require men to prove that they did not rape a woman if they are accused, thus blandly reversing centuries of English legal tradition in the name of feminism. [Men must prove a woman said ‘Yes’ under tough new rape rules, by Gordon Rayner and Bill Gardner, Telegraph, January 28, 2015]

Only a few days later, a damning government report showed that the systematic rape and sexual abuse of thousands of underage English girls in the town of Rotherham over the course of a decade was actively enabled by the local government, which did not want to be accused of being racist. Thus, we see the function of the state during the Death of the West—not to uphold any objective standard of law or morality, but to enforce the multicultural pecking order. 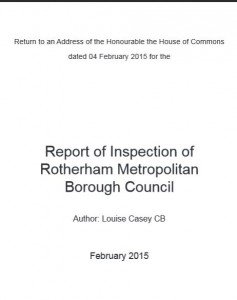 The “Report of Inspection of Rotherham Metropolitan Borough Council” [PDF] is damning. Nor does it fail to ascribe blame to the local political leadership. The entire local government of Rotherham is described as “not fit for purpose.” The Labour leadership of the local council has resigned, and five officials from the British government are to run the town [Rotherham Council taken over by Government as bosses quit following child abuse scandal, by Lucy Thornton and Jack Blanchard, Daily Mirror, February 4, 2015].

And the report does not pussyfoot around when it comes to who was responsible for years of systematic and comprehensive sexual assault: “Children were sexually exploited by men who came largely from the Pakistani Heritage Community.” In describing the repeated testimony of witnesses that the perpetrators of sexual assault were Pakistani, the report acknowledges the reluctance to be Politically Incorrect but insists, “This was a matter of fact.”

More than that, the report acknowledges that it was the very desire to avoid seeming racist that enabled years of systematic abuse. This Politically Correct cowardice expressed itself in three major ways.

What we have then is a closed political class that actively knew of the problem but thought the greater evil came from the possibility that white fathers and mothers whose daughters were raped might get upset and support the Far Right.

Therefore, the town’s police and political Establishments closed ranks to prevent information from getting out. As the report puts it: “Child abuse and exploitation happens all over the country, but Rotherham is different in that it was repeatedly told by its own youth service what was happening and it chose, not only to not act, but to close that service down.”

When reports of what was happening did make it to the press, the local government tried to dismiss them because, in the words of one Councilor, “The accusations in the press appeared to be biased, political accusations from a newspaper—Murdoch press, with little evidence. They had felt that The Times was picking on a Labour [local government] authority.”

Now, the facts are out. And on the one hand, the Rotherham report shows government acting decisively against official wrongdoing. The local leadership has suffered real political consequences, the central government is essentially taking over and the affair has received notable coverage in both the United Kingdom and the United States.

Yet the entire affair is still a masterpiece of modern banality. The investigation was ordered by the current “Secretary of State for Communities and Local Government,” a Conservative Party functionary with the too-good-to-make-it-up name of “Eric Pickles.” (Disarmingly, Pickles is flag enthusiast who encourages the flying of English county flags and the English national flag, the Cross of St George).

The actual author is one Louise Casey, the “Director General, Troubled Families,” a bureaucratic post that lies of a pinnacle of a career spent working under both Tories and Labour on various commissions and task forces. Incredibly, Casey spends a good bit of the report condemning the “Far Right” for trying to take advantage of the situation and even positing their existence as part of the explanation of the actions of the Rotherham government.

By failing to take action against the Pakistani heritage male perpetrators of CSE [child sexual exploitation] in the borough, the Council has inadvertently fuelled the far right and allowed racial tensions to grow. It has done a great disservice to the Pakistani heritage community and the good people of Rotherham as a result.

In other words, to paraphrase the notorious U.S. General George Casey Jr. (who I don’t think is a relation) in the wake of the Fort Hood shootings: as much as the systematic sexual assault of thousands of young girls is a tragedy, it would be a shame if Rotherham’s diversity became a casualty as well.

Louise Casey laments that the Rotherham government, by trying to be Politically Correct, has enabled a massive crime that “perversely” will allow “the far right to try and exploit the situation.”

Yet it was the “far right,” and only the “far right,” in the form of the British National Party, that had actually tried to put a stop to what is going on. And for their trouble, the government of the United Kingdom put the leaders of the British National Party on trial, the leftist “anti-fascist” groups protested against attempts to stop the mass rape of young girls, and the Main Stream Media actively buried its own reporting. Even when the scandal finally broke, the fact that it was the “Murdoch papers” publicizing the crimes was enough to make the Rotherham city government try to bury it by attacking the source.

The pattern continues. When UKIP leader Nigel Farage visited Rotherham a few days ago, the same Leftist protesters that were conspicuously absent while their town’s daughters were being molested and raped turned up to showily protest the “racism” of UKIP [Nigel Farage abandons walkabout in Rotherham as protesters blockade him in Ukip office, by Rosa Prince, The Telegraph, February 6, 2015]. Sarah Champion, the Labour Party’s sitting MP in Rotherham, says that Nigel Farage is trying to “gain office” from the child abuse scandal, which is “the lowest thing I’ve seen in politics.”

And there can be no doubt she means it—even though she has been quoted elsewhere as saying “I think there could be up to a million victims of exploitation nationwide, including right now. Girls in the process of being groomed…we know at least four big cases each with a couple of thousand each in smallest towns” [Child sex abuse gangs could have assaulted ONE MILLION youngsters in the UK, by Lucy Thornton, Daily Mirror, February 5, 2015].

As with mass immigration, the massive rape of English girls by Pakistanis in a typical city in Northern England is simply the cost of doing business by the political Establishment. While they are no doubt unhappy it took place, the Labour Party, the British press and for that matter many British people do not seem to have the kind of righteous indignation about Rotherham that they do against “the far right.”

Why? The reason is also, “perversely,” contained in Louise Casey’s report. As one local government official put it,

[My] experience of council as it was and is—Asian men very powerful, and the white British are very mindful of racism and frightened of racism allegations so there is no robust challenge. They had massive influence in the town. For example, I know all the backgrounds to the Asian Councillors… but don’t know anything about white Members. Not about race only but the power and influence—the family links in those communities are still very strong. Definitely an issue of race.

In any other age, the scandal of Rotherham would have led to revolution. It certainly justifies it. But if it’s just a crime committed by one group of atomistic individuals committed against another group of random atomistic individuals—as the British Establishment and media are now trying to claim—than it has no larger importance.

The problem for Britain is that it is replacing its own people with Third Worlders who have tribal values. Those values are proving their evolutionary superiority over the consumerist individualism that our political leaders seem so determined to celebrate.

The residents of Rotherham are learning what the entire West will soon understand—a strong tribe will defeat a weak nation.