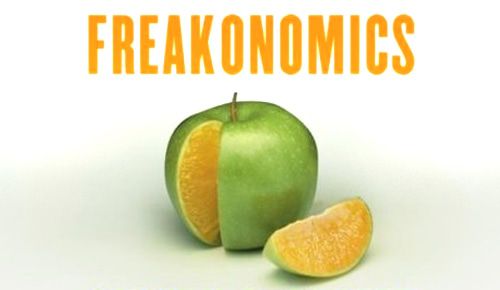 The Freakonomics of Race and IQ

I come not to bury Freakonomics, but to praise it. 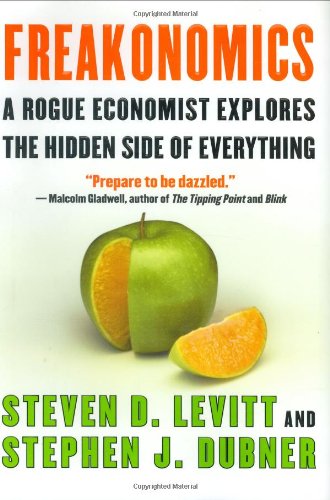 The new book Freakonomics: A Rogue Economist Explores the Hidden Side of Everything by celebrated University of Chicago economist Steven D. Levitt and ace journalist Stephen J. Dubner is a publishing sensation. As I write, it ranks #2 on Amazon.com's bestseller list, trailing only the upcoming Harry Potter novel.

The two worst things about Freakonomics are its painfully embarrassing title and its most-hyped component: Levitt's theory that legalizing abortion from 1970 to 1973 caused half of the subsequent crime drop in the 1990s, because it culled fetuses more likely to become lawbreakers 17 years later.

But, from the VDARE.COM point of view, there are some surprisingly good things in it.

The Wall Street Journal's website trumpeted Levitt's book, saying “Meet the economist who figured out that legal abortion was behind dropping crime rates” (by Steven E. Landsburg, April 13 2005). And John Tierney devoted his second effort as a New York Times op-ed columnist to describing how Levitt and his abortion theory crushed New Yorker writer Malcolm Gladwell, author of The Tipping Point, in a debate over the cause of the crime decline in New York City.

Oh yeah? I arranged for Levitt to debate me in Slate.com way back in 1999. I pointed out, to his surprise, that the first generation born after legalization instead went on the biggest teen murder spree in American history.

This year, no doubt prudently, Levitt refused his publicist's recommendation that we resume our debate.

I'm not going to carry on that controversy in this article because I've already had my say on Levitt's abortion-cut-crime theory in my “Pre-emptive Executions?” essay in The American Conservative and on my iSteve.com blog (here).

Instead, I'm magnanimously going to show how Freakonomics is nevertheless a valuable book—because Levitt cautiously presses the envelope in terms of what you are allowed to say in American mainstream discourse about IQ and race.

Freakonomics is constantly being compared to Malcolm Gladwell's latest bestseller Blink: The Power of Thinking Without Thinking (which I reviewed in January). But in fact Levitt's book is far more interesting.

If Gladwell were to write about how to make a fortune on the stock market, his formulaic approach would no doubt start by taking a piece of ancient advice that everybody has heard, but that nobody (including Gladwell) has any idea how to execute consistently, such as: Buy low, sell high.

Then Gladwell would dream up a new buzzphrase that means the same thing but uses that trendiest element in grammar, the present participle—as in his recent mantras “The Tipping Point” and “Thin-Slicing”. Buy low, sell high could be Gladwellized into Investing Down, Divesting Up ©™®

Gladwell would pad his book with inspiring but contradictory anecdotes about people who got rich following this amazing strategy. Finally, he would cash in big by giving speeches at $40k a pop on how you too should employ the power of Investing Down, Divesting Up ©™®.

In contrast, Levitt is actually interested in explaining how bits and pieces of the world work even if the topic possesses no obvious appeal on the sales convention circuit. Freakonomics is not a great book because it's too scattershot, breezily covering a random selection of conundrums. Yet Levitt's casual but broad interests in daily life make it, despite his quantitative bent, an easy read.

Like Adam Smith, but unlike many economists who are doctrinaire free marketeers, Levitt trusts capitalism more than capitalists.

For example, he points out that you shouldn't rely upon the real estate salesperson you hire to sell your home for the best price. Realtors make more money by churning through sales quickly, so they consistently underprice their clients' homes and badger their clients into selling too early.

Levitt studied 100,000 home sales in Chicago and found that when selling their own homes, real estate agents held out on average for ten days more than their clients did and, all else being equal in terms of the quality of the house, got over three percent more for it, or $10,000 on a $300,000 home.

This is a useful but not terribly astounding finding. Indeed, the only thing remarkable about his realtor research is that, apparently, no economist ever published a study of this obvious phenomenon before Levitt.

In contrast, my wife, who majored in economics but is not a professional economist, pointed this out to me many years ago. It was why she decided to sell our condo herself. She obtained significantly more than our naive neighbors got for their identical units—even before they handed a three percent commission over to their realtors.

Another example: public school teachers who are supposed to administer high stakes tests to their own students will often cheat. (If the No Child Left Behind Act isn't going to be turned into an utter joke by fraud, we will need an independent national testing organization.)

Despite his claims to be a “rogue economist,” Levitt is actually viewed as the coming superstar by his profession. In 2003, the American Economics Association awarded him its John Bates Clark Medal as the outstanding economist under 40.

Perhaps the most important topic Levitt could study in the future is: What ails the economics profession that Levitt is considered a revolutionary in 2005 for doing research his elders should have done decades ago?

Which leads us to race and IQ. Like anyone with a healthy curiosity about life, Levitt can't avoid butting into these two most career-threatening topics.

Economists have traditionally been terrified of them—particularly when they show up together, as they so often do.

Three years ago I showed Levitt's mentor, the Nobel Laureate economist Gary Becker, the key scatter plot in Richard Lynn and Tatu Vanhanen's groundbreaking IQ and the Wealth of Nations. This graph demonstrates that the correlation between average national IQ in 81 countries and per capita GDP is a startlingly strong r = 0.73.

I presumed that a famous expert on “human capital” would be interested in what is likely the most important finding in his field's history. But I didn't truly know what “fear and loathing” was until I saw the expression on Dr. Becker's face when alerted to this unwelcome information. (Click here for Peter Brimelow and Leslie Spencer's experience with Becker).

Likewise, Gladwell has become more politically correct about race as the amount of corporate speaking money he could lose from a “gaffe” mounts. To see how brave Gladwell once was, check out this 1997 article in which he not only makes the same argument about gender differences that Harvard president Larry Summers was savaged for making last January, but also…applies that heretical reasoning to black-white genetic differences!

Levitt isn't as bold as Gladwell was in the 1990s, but he's less craven than Gladwell is today. It's instructive to watch Levitt dance up to the edge of trouble, then pull back.

Thus the 1999 version of the abortion-cut-crime argument, a Harvard Quarterly Journal of Economics paper by Levitt and John J. Donohue, [PDF] was rather blunt about how they believed increasing abortion through legalization could supposedly cut crime by aborting more black fetuses:

“Teenagers, unmarried women and African Americans are all substantially more likely to seek abortions. Children born to these mothers tend to be at higher risk for committing crime 17 years or so down the road, so abortion may reduce subsequent criminality through this selection effect.”

Freakonomics, however, has been scoured of Levitt's original linkage to race. Now, Levitt attributes the entire impact of abortion on crime to reducing “unwantedness.” (For why legalizing abortion did not cut “unwantedness,” see here.)

But in other chapters of Freakonomics, Levitt, being a quantitatively-oriented guy, finds himself backing Nature over Nurture much of the time.

In the chapter “What Makes a Perfect Parent?” Levitt-Dubner write:

Unfortunately, this enormously expensive study seems to have intentionally failed to obtain the most obviously relevant data: the parents' IQ scores.

“Parents who are well educated, successful, and healthy tend to have children who test well in school; but it doesn't seem to matter much whether a child is trotted off to museums or spanked or sent to Head Start or frequently read to or plopped in front of the television.”

In other words, “Kids, choose your parents wisely.” (For an analysis of what parents can influence, such as culture and peers, see my review “The Nature of Nurture“ of Judith Rich Harris's The Nurture Assumption, a book that greatly influenced Levitt.)

These are fairly brave, but not forbidden, truths to tell these days. It's still okay to say “IQ is strongly hereditary” … as long as you don't mention that when discussing the 15 point gap between white and African-American average IQs. When talking about the race gap, you are supposed to assume that some mysterious “X” factor causes the one standard deviation difference between the races … Or, better yet, never mention IQ and race in the same paragraph.

In Freakonomics, Levitt-Dubner go on to blame the widening of the racial test score gap as children mature on the fact that black kids attend worse schools.

Yet the authors' description of what makes schools attended by blacks bad verges on self-parody—almost a nudge-nudge-wink-wink to alert the reader while avoiding a politically-incorrect gaffe that could get them roasted like poor Larry Summers:

“Just how are black schools bad? Not, interestingly, in the ways that schools are traditionally measured. In terms of class size, teachers' education, and computer-to-student ratio, the schools attended by blacks and whites are similar.

“But the typical black student's school has a far higher rate of troublesome indicators, such as gang problems, nonstudents loitering in front of the school, and lack of PTA funding.

“These schools offer an environment that is simply not conducive to learning.”

You'd have to be awfully naïve not to notice that Levitt and Dubner are signaling that the essential reason schools that have lots of blacks students tend to be bad is because they …have lots of black students.

In yet another chapter, however, Levitt and Dubner show some explicit courage about race—perhaps even more than is empirically warranted.

In “Would a Roshanda by Any Other Name Smell as Sweet?“ they consider those super-black names that black mothers started giving their babies during the Black Pride era:

Levitt and Dubner show strikingly little sympathy toward blacks who have a harder time getting called in for a job interview because, as shown by numerous “audit studies”, employers are dubious of DeShawns and Darnells.

“Was he rejected because the employer is a racist and is convinced that DeShawn Williams is black? Or did he reject him because 'DeShawn' sounds like someone from a low-income, low-education family?”

Sure, as the authors imply, a boy named DeShawn may indeed be, on average, more likely to goldbrick or to rip off his employer than a boy named, say, “Dov“ (the male name with the most educated parents according to the book).

There aren't too many people who make me sound like a diversity-sensitive multi-cultist, but sometimes Levitt is one of them! The authors could at least have a little compassion for the poor kid. DeShawn didn't ask to be given his name.

And I must point out that a new study by economist David Figlio calls into question Levitt's assumption that DeShawns aren't hurt by prejudice. Figlio cleverly looked at siblings, and found that the ones with the blacker names tended to get rated more poorly by their schoolteachers even when their test scores were the same.

In summary, Freakonomics is hardly a perfect book. But its huge success may expand, modestly, the perimeter of what is respectable to write about race and IQ here in the land of the free and the home of the brave.