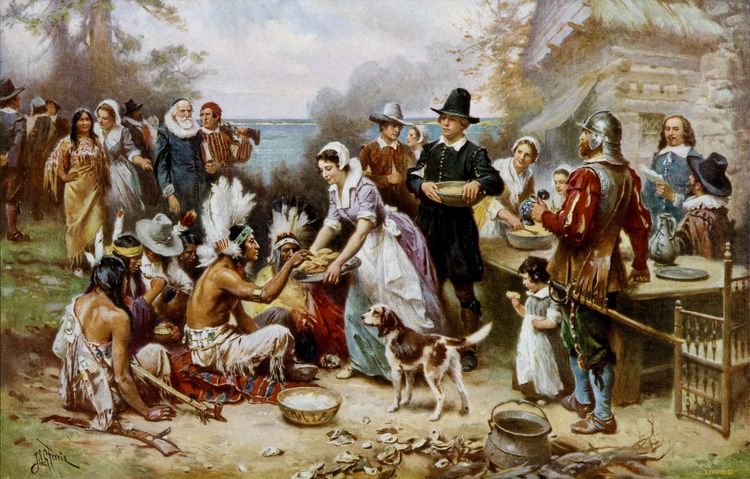 The Fulford File, By James Fulford | The War Against Thanksgiving

You can tell that the War Against Christmas is coming soon, because it's War Against Thanksgiving time!

"For decades, Claremont kindergartners have celebrated Thanksgiving by dressing up as pilgrims and Native Americans and sharing a feast. But on Tuesday, when the youngsters meet for their turkey and songs, they won't be wearing their hand-made bonnets, headdresses and fringed vests.

"Parents in this quiet university town are sharply divided over what these construction-paper symbols represent: A simple child's depiction of the traditional (if not wholly accurate) tale of two factions setting aside their differences to give thanks over a shared meal? Or a cartoonish stereotype that would never be allowed of other racial, ethnic or religious groups." [Claremont parents clash over kindergarten Thanksgiving costumes, By Seema Mehta, Los Angeles Times, November 25, 2008]

Ah, I can answer that—it's an American tradition. And I do not think that they're worried about the stereotype of Pilgrims wearing steeple hats and buckled shoes.

The complaining, as is traditional at modern Thanksgivings, comes from an unThankful Indian:

"'It's demeaning,' Michelle Raheja, the mother of a kindergartner at Condit Elementary School, wrote to her daughter's teacher.'I'm sure you can appreciate the inappropriateness of asking children to dress up like slaves (and kind slave masters), or Jews (and friendly Nazis), or members of any other racial minority group who has struggled in our nation's history.'

"Raheja, whose mother is a Seneca, wrote the letter upon hearing of a four-decade district tradition, where kindergartners at Condit and Mountain View elementary schools take annual turns dressing up and visiting the other school for a Thanksgiving feast. This year, the Mountain View children would have dressed as Native Americans and walked to Condit, whose students would have dressed as Pilgrims."

Of course, it's Raheja casting the Pilgrim Fathers as the Nazis/slave masters, and the Indians as the minority group. This is false—the Pilgrims were Protestant Christians, the Indians were pagan savages. The Pilgrims were anti-slavery Puritans whose descendants would fight on the Northern side in the Civil War, the Seneca were slave-owners and raiders. (Their victims being mostly other Indians, of course. They used to capture whole villages of Hurons and assimilate them.) And while Indians are now a minority group, at the time of the first Thanksgiving, the Pilgrims were the minority—they were the only white people for thousands of miles in any direction. What this is, of course, is history told from the enemy's point of view.

"Raheja, an English professor at UC Riverside [Send her mail] who specializes in Native American literature, said she met with teachers and administrators in hopes that the district could hold a public forum to discuss alternatives that celebrate thankfulness without 'dehumanizing' her daughter's ancestry.

"'There is nothing to be served by dressing up as a racist stereotype,' she said."

Well, that depends. Short of massive cosmetic surgery, the only way for a kindergartener to impersonate an Indian or a Pilgrim is by dressing in costume. And it's not automatically "racist" to wear a headband, like the Indians used to. Besides, kids love it.

"Kathleen Lucas, a Condit parent who is of Choctaw heritage, said her son—now a first-grader—still wears the vest and feathered headband he made last year to celebrate the holiday.

There are actual instances of resistance to Raheja, which is a good sign. It shows that parents are getting wise to the agenda behind this stuff. The story quotes one mother saying Raheja is "using those children as a political platform for herself and her ideas. I'm not a professor and I'm not a historian, but I can put the dots together." and another saying "She's not going to tell us what we can and cannot wear."

But the whole thing is part of the plan to abolish America. Any victory won by Americans in the past must be evil, the establishment of American itself must be evil. But none of its enemies can ever be evil. (Except, of course, for the Nazis and the Confederacy, both of which were used as examples by Raheja.)

The modern multicultural state holds all American traditions hostage—there will always be someone descended from past enemies of the United States in your child's classroom, to try and make you feel bad about celebrating American victories at, say, the Heights of  Chapultepec, or mourning the sneak attack on Pearl Harbor.

The assault on Thanksgiving by Politically Correct Indians is just a part of that.

It's a form of Political Correctness that needs to be resisted, and Thanksgiving is a time to remember what we have to be grateful for, and also remember that the settlers found that they had to fight to keep it. Happy Thanksgiving, everyone, and don't let anyone tell you different!

11/23/05 - VDARE.COM Wishes Everybody A Happy Thanksgiving

11/21/07 - The Fulford File: The Thanksgiving Of A Grateful Nation—And The Ingratitude Of A Few