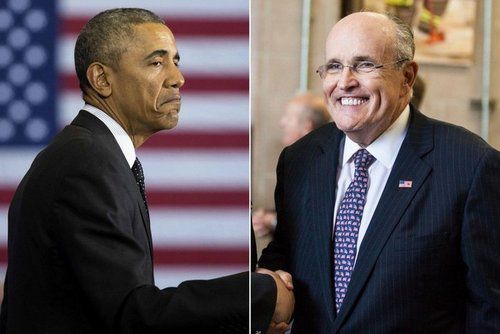 The Fulford File | Of Course, Giuliani Is Right That Obama Doesn’t Love America—He’s Leftist AND Black

Here’s the basis of the latest earthshaking scandal about a white Republican blaspheming the President:

With [Scott] Walker sitting just a few seats away, Giuliani continued by saying that “with all our flaws we’re the most exceptional country in the world. I’m looking for a presidential candidate who can express that, do that and carry it out.”

This has produced a number of reactions—the black press reacted like this:

The former New York City mayor and his GOP cohorts want to guarantee that the next president is a white male, and they’re stirring up racial animus to do so.

The more Establishment Main Stream Media is now in a feeding frenzy about how Rudy could come to say such a horrible thing:

…by suggesting that President Obama did not love his country, Mr. Giuliani became the story.

His remarks, seemingly out of the blue, were not an isolated outburst.

No more than an hour or two before Mr. Giuliani appeared at Mr. Walker’s event, he vented his frustration at Mr. Obama at another fund-raising event in Manhattan. There, Mr. Giuliani took particular issue with the president’s recent comments likening Islamic extremist terrorism to the religious warfare of the medieval Crusades.

[In Remarks on Obama, Rudy Giuliani to the Core, By Alexander Burns And Maggie Haberman, New York Times, February 20, 2015]

Here’s some more coverage from the somewhat more rational, mostly white but still liberal, reporters at the New York Times:

Unusually, however, Giuliani has stuck to his statement, refused to apologize, and “doubled down”, as they say, attacking Obama on what are, he insists, explicitly non-racial grounds, as a far-Left Democrat, who was more or less brought up Communist [Giuliani: Obama influenced by communists since youth, By Carl Campanile and Geoff Earle, New York Post, February 21, 2015].

Fair enough, as far as it goes. Obama’s connections with the far Left are many times more extensive and graver than GOP Whip Steve Scalise’s much-ballyhooed alleged connection with the far Right.

And while I know, like Giuliani, that this is “a horrible thing to say”, the plain fact is that far-left Democrats are less patriotic than Republicans.

This is true at the highest level—George McGovern, Jimmy Carter, Bill Clinton, John Kerry, all of them very white.

For one thing, they’ve consistently tried to get America to lose wars in modern times. Their greatest success was the loss of the Vietnam War, and while they failed to lose the Cold War with the former Soviet Union, they tried very hard to do so.

They also deplore, retrospectively, American successes in any war but the Civil War and World War II. If you question the wisdom of either of those two wars, you can expect to be denounced as some kind of Confederate Nazi. But you’ll get equal grief if you support or glory in America’s victories over the Indians, in the Mexican War in the 1840s, in the Spanish-American War—you get the idea. In fact, Obama has gone on record apologizing for most of it.

As Ann Coulter wrote in Treason: Liberal Treachery From The Cold War To The War On Terrorism

Liberals want to be able to attack America without anyone making an issue of it. Patriotism is vitally important — but somehow impossible to measure. Liberals relentlessly oppose the military, the Pledge of Allegiance, the flag, and national defense. But if anyone calls them on it, they say he's a kook and a nut. Citing the unpatriotic positions of liberals constitutes "McCarthyism." (VDARE.com link added). 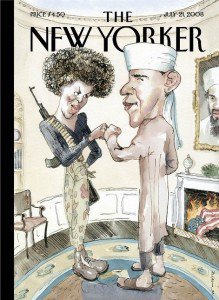 As I pointed out during the2008 controversy over the satirical New Yorker cover (Right) which was supposed to represent what Republicans imagine about Barack and Michele, the reason there’s an American flag burning in the fireplace is because neither Barack nor Michelle is particularly patriotic in the Lexington and Concord sense.

Again, the plain fact is that many African-Americans aren't—because they listen to people like Obama’s former pastor, Jeremiah Wright.

I also pointed out that Obama has never actually set a flag on fire. That's not how you get elected President. As Pat Buchanan said “And that flag pin Barack got rid of after 9-11, calling it a “substitute … for real patriotism”? It's back on the lapel. “

But let me fill that in about African-Americans and patriotism. When black abolitionist Frederick Douglass made a speech in 1852 titled “What to the Slave Is the Fourth of July?” you could hardly blame him for it. However, more recently we’ve seen African-Americans supporting the enemy side during the Viet Nam War, the Gulf War, and the War On Terror. They simply didn’t believe it was their country they were being asked to fight for.

In fact, there were even blacks in Harlem who supported the enemy during World War II!—see my December 2013 article Harlem Nazis Of The 40's—Black Admiration For Enemy Dictators Didn't Start With Kim Jong-Un.

The Left would say, in different circumstances, that blacks are alienated.

I pointed out there that Obama isn’t really hiding anything. He isn’t a secret Muslim or secret Communist. He's openly anti-American, based on his specifically racial feelings towards the United States and its white majority. That's why he does all that bowing and apologizing for America's (white) past. That’s exactly why we keep hearing from his supporters that it’s “not your father’s America” anymore.

In defense of anti-war paleocons, of course you can be a patriot and be opposed to a particular war. But there’s a big difference between Pat Buchanan’s reason for not wanting America involved in a war, and Muhammad Ali’s support for the Viet Cong—or Martin Luther King’s support for the same cause.

No, I am not going 10,000 miles to help murder, kill, and burn other people to simply help continue the domination of white slavemasters over dark people the world over. This is the day and age when such evil injustice must come to an end.

Buchanan thinks America should stay out of wars because he loves America—Ali thought he hated white people and didn’t want to be involved in their wars.

“We bombed Hiroshima, we bombed Nagasaki and we nuked far more than the thousands in New York and the Pentagon, and we never batted an eye. “

Why didn’t Obama protest? Because that kind of talk is mainstream with black preachers.

After all, Obama says he wants to transform America politically—and transform it demographically through Amnesty. How much clearer could he make it that he doesn’t love America the way it is? (Neither does Michelle.)

But because so many blacks feel that way, and say so, pointing out that Obama does so too is racially offensive. That’s what the big deal is.

Of course, when The Root’s Ellison said that Rudy and the GOP “want to guarantee that the next president is a white male,” he was just wrong. They don’t, they’re clueless on the subject.

But maybe they should want a white male—because if a white candidate for President didn’t love America, at least we’d be allowed to say so.