The Fulford File: The Rest Of The Drew Fraser Story—Sudanese Refugees ARE Crime-Prone

The antidote to the various Politically Correct moral hysterias that sweep through modern society is truth. Unfortunately, the Ruling Class doesn’t often seem to get around to correcting the record, let alone repairing the damage. So VDARE.com has to try instead. Here’s a case study from Australia.

Andrew (“Drew”) Fraser, long-time professor of law at Macquarie University in Australia and a too-infrequent writer for VDARE.com, gained public notoriety in 2005 for protesting mass immigration into Australia in a letter to his local newspaper. The scandal arose from his matter-of-fact reference to the increased crime that African immigrants could be expected to bring with them. He was immediately suspended from teaching, and a peer-reviewed academic article he had written—"Rethinking the White Australia Policy”—was hastily suppressed.

Now that a large number of Sudanese refugees have been settled in the Parramatta-Blacktown area, Anglo-Australians are once again expected to acquiesce in the steady erosion of their distinctive national identity.

Australia, it seems, can no longer remain the homeland of a particular people. Instead, it must become a colony of the Third World.

Thirty years ago, no one in the world had any difficulty identifying an Australian. Today, if the headline in the Sun (below) is to be believed, black Africans and Muslim Afghanis "are Aussies just like" the descendants of the Anglo-Celtic pioneers who settled and built this country.

Community Relations Commissioner Stepan Kerkyasharian declares that "Australians ...have a responsibility" to help those on the losing side in Third World civil wars to settle here, wherever and whenever it suits governments and the ever-expanding refugee industry. He assures us that the ethnic and religious conflicts endemic to every other part of the world will be magically dissolved by the state-enforced "commonality of Australianism."

That utopian fantasy is particularly likely to unravel as local African tribal groups grow in size and confidence. Experience practically everywhere in the world tells us that an expanding black population is a sure-fire recipe for increases in crime, violence and a wide range of other social problems.

The fact is that ordinary Australians are being pushed down the path to national suicide by their own political, religious and economic élites. Shutting our eyes to that fact will not make it go away.

Needless to say, Fraser lost his job for writing that well-expressed letter to the paper—see Wikipedia or Race row professor suspended for 'safety',  By Jano Gibson and Tim Dick, SMH,  July 29, 2005.

That was twelve years ago. So have the Sudanese been behaving themselves in Australia since then?

Oh boy, have they ever! And by "behaving themselves", I mean "behaving like Sudanese refugees." 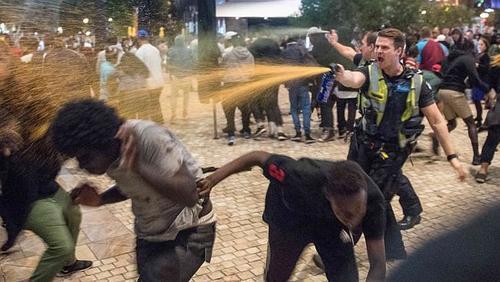 One blogger I follow is the one who calls himself Oz Conservative. He’s very much on my wavelength, or I’m on his.

Well, reading Oz Conservative the other day I caught a reference to the Apex gang, which I’d quite forgotten about.

Who they? They a criminal gang in Melbourne, Australia, who staged a nasty riot of their own back on March 12 this year, the so-called Moomba riot. [ Police charge 34, some with links to Apex, over Moomba riots, The Melbourne Age, April 19, 2016]

There seems not to have been any particular cause for the Moomba riot. The only thing the news reports are all agreed on is that it was nothing to do with race. Absolutely nothing, I tell you!

And Steve Sailer noted this in January, 2017: THE AGE: Sudanese in Melbourne, Australia, Are Victims of Racial Profiling (Also, They Commit 2 Orders of Magnitude More Major Crimes) . 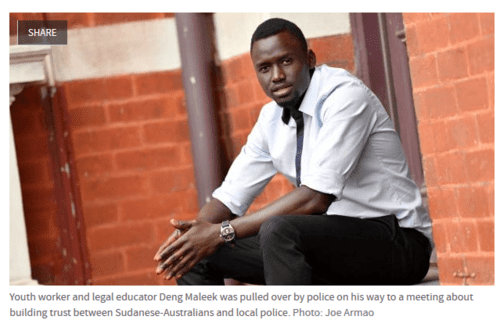 In the story Sailer was linking to [Apex fears spark concerns about racial profiling, by Tammy Mills and Bianca Hall, January 8, 2017]. The Age wrote that a local Sudanese “community educator” had been pulled over by police wanting to see his drivers license because “We just want to make sure the car belongs to you” which he said was “pretty much an everyday experience for me.”

At the end of the Melbourne Age article is this revealing note:

(That’s because Australians are in the vast majority in Australia—it’s like saying that whites commit more murders than blacks, without noting the rate).

But Sudanese youths were vastly over-represented in the 2015 data, responsible for 7.44 per cent of home invasions, 5.65 per cent of car thefts and 13.9 per cent of aggravated robberies, despite Sudanese-born citizens making up about 0.11 per cent of Victoria’s population.

Sailer was shocked that the Sudanese were committing that high a percentage of the aggravated robberies, I’ll just note that the number of car thefts justifies an police inquiry like the one the Sudanese “youth worker” quoted above objected to. 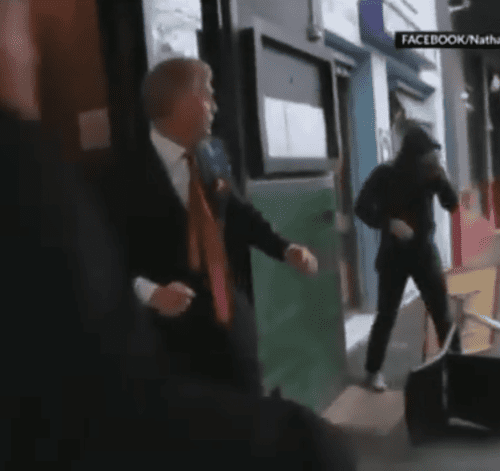 The Age is one of Australia’s left-leaning papers. The Herald Sun, which employs conservative columnist Andrew Bolt (pictured right, making two masked Antifa youths wish they’d picked someone else to assault) is not.

Here are some official statistics from the Australian Government

By the way, if the Australian Bureau of Statistics is talking about 131 prisoners equalling 701.6 per 100, 000, that means that they think there are only about 18,670 Sudanese living in Australia (a country of 24 million) which is  about right.

Remember that these are penitentiary-type prisoners, and imagine a town of that size that had 131 young men in the Big House.

Not every Sudanese committing a serious crime is counted in this statistic, of course. This guy had eight restraining orders, a six-month suspended sentence, before serving six actual months in jail for assault on a pregnant woman:

A REFUGEE who embarked on a seven-year crime wave and earned eight Apprehended Violence Orders [=restraining orders] for his violent behaviour has failed in his ­attempt to stay in Australia.

The 24-year-old father-of-three began his criminality within two years of being granted asylum in Australia with his family at age 12.

But last week he pleaded not to send him back to Sudan where he “may be killed” because he was “actually a nice guy”.

However, the “significant” and “unrelenting” offending over seven years was enough for the Administration ­Appeals Tribunal to rule in favour of deporting the man, despite noting he would be separated from his young children.

The Tribunal heard “NHHV” had spent time in camps in both Sudan and Egypt before arriving in Australia with his mother and siblings on a humanitarian visa. The family settled in Orange in central western NSW.

The Tribunal heard he began “serious offending” as a juvenile. In 2012 he received a six-month suspended sentence after allegedly punching his mother — a claim they both denied, despite police notes suggesting otherwise.

It was also revealed NHHV’s mother had been back to Sudan three times, where she had stayed for up to six months despite her son’s claims it was dangerous.

In 2016, NHHV was sentenced to six months for assaulting his pregnant ex-partner.

Sudanese refugee who went on a crime wave and has eight AVO’s, loses appeal to stay in Australia, by Linda Silmalis, The Sunday Telegraph, July 8, 2017

His three children are staying in Australia.

Authorities were warned in 2007 but chose instead to shoot the messenger.

The Howard government Immigration Minister, Kevin Andrews, publicly warned that youth crime rates among the Melbourne South Sudanese youth community was growing.  Mr. Andrews said at the time that he intended to cut back on taking in so-called refugees from South Sudan because they were not settling in and adjusting into the Australia way of life and crime rates among Sudanese was too high.

Instead of listening to the message the media chose to scream abuse and the ethnic lobby groups, along with politicians and the Victorian Equal Opportunity and Human Right Commission branded Mr. Andrews a racist.

Kevin Andrews was right and a decade on we now see Sudanese youth crime figures in Victoria that are staggering. In 2016 in the Greater Dandenong region there were 14,000 home invasions, carjackings, property theft, property damage and armed assaults recorded in the year to March. In 2015 there were 11,000 such crimes recorded. It is said that the figures for Latrobe were even higher and the crime spree continues to gain momentum in the first month of this year.

Now, at the beginning of 2017 the Sudanese youth crime spree is in full swing and the best that the leaderless Victoria government and the Victorian Police Command can come up with is a promise to employ 3000 more police and introduce new laws. In the meantime, crime is increasing and has long since turned to violence involving guns and other weapons while the Police Command and the government carry on with their PC approach and their reluctance to mouth the words black or Sudanese.

Police chief Graham Ashton admits that his officers on the ground are, “arresting the same young people again and again and again.”  If that is not an admission of failure then I don’t know what is (it also raises the question as to the judiciary’s part in this dangerous shemozzle). [More]

Sudanese crime is out of control, by Jack Cade, Australian Morning Mail, January 21, 2017

Former Immigration Minister Kevin Andrews certainly deserves an apology. But so, as I pointed out earlier, does former university professor Drew Fraser. And reinstatement.