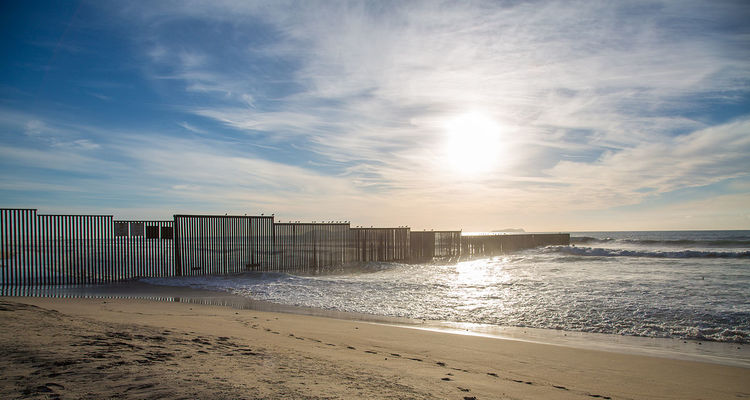 The Future That Works (Despite Dubya): Illegal Immigration Can be Controlled

"...they're going to come to the United States if they think they can make money here. That's a simple fact. And they're willing to walk across miles of desert to do work that some Americans won't do. And we've got to respect that, seems like to me, and treat those people with respect. I remind people all across our country: Family values do not stop at the border." President George W. Bush

In Iowa, the issue of whether the state should adopt the governor's plan to import immigrants to foster the state's "diversity" is still a hot potato, and more than one political career may hang on its outcome. But in southern California they already know the price that "diversity" brings—and most people don't like it.

The New York Times reports that in the oceanside city of Imperial Beach, just south of San Diego, the U.S. Border Patrol has constructed a fence to keep out illegal immigrants. The fence works. Not only are the illegals few and far between in the area now, but the quality of life as well as the economy have improved strikingly. (NYT, August 21, 2001, "On California's Urban Border, Praise for Immigration Curbs," By Mireya Navarro) [VDARE note: Click here for a letter to the Times which advises residents of Imperial Beach to relax and enjoy the invasion.]

Prior to the fence, illegals poured over the border and through the town—over the beaches, across private property, frightening tourists as well as residents and inciting hotel guests to pack their bags and head somewhere else for a vacation. In one 24-hour period, the Border Patrol nabbed no fewer than 2,000 aliens sneaking over the border. The uncontrolled immigration that the open borders lobby bubbles and chirps about so much was wrecking the area—socially as well as economically.

Then the fence went up, as part of an on-going Border Patrol project called "Operation Gatekeeper." The idea is to secure those areas where illegals most frequently cross over, and it's been tried in such places as El Paso and Brownsville, Texas, with similar results.

In Imperial Beach, ever since the fence went up, the "tourists are coming in droves, and more people are moving in than out," the Times reports, and "grateful residents say the stepped-up vigilance has all but sealed the once popular smuggling routes across their beaches, parks and backyards and helped revive the area's economy and improve the quality of life."

Hotels now fill up with guests and beach events have more attendees. Home prices are going up as the immigrants who traipsed through lawn and garden vanish. Imperial Beach's mayor remarks, "When I hear comments that Operation Gatekeeper doesn't work, well, it's worked for us. Suddenly, people feel comfortable walking along the beach with their children in the evening. Your evenings are not disrupted anymore. People want to live here."

Could it be that maybe mass immigration is not so great after all, that the open borders lobby doesn't know what it's talking about, that the only reason we have mass immigration at all is because libertarian ideologues ally with Big Business interests in cheaper labor, and that "diversity" is simply a fraud? Could it possibly be that if immigration ceased, American society and the national economy might actually improve?

Well, no, it's probably just that Imperial Beach is unique in some way. Elsewhere, as everyone knows, immigration keeps the economy going, the immigrants are hard-working and have strong family values, and diversity is our strength.

Well, actually, as the Times also reports, a General Accounting Office report (PDF format) released this month shows that "other communities where border enforcement had increased had experienced economic improvement and lower rates of crimes like theft" too.

"In Nogales, Ariz., officials reported that as crossings declined, many small convenience stores that catered to illegal immigrants went out of business and large retailers took their place, attracting legal shoppers from both sides of the border. In Brownsville, Tex., shoplifting incidents dropped and a park near the Rio Grande is used again by families, the accounting office reported."

As the Times also notes, one result of the tighter border security in such places is that illegal immigration is diverted into less safe and pleasant places, where immigrants often get injured or die from exhaustion or exposure. That's why the Mexican government is so mad, claiming our border security endangers their illegals. But maybe Mexico ought to think about doing something to slow down the exodus of its own people if it's so worried about their welfare.

What has happened in Imperial Beach could be a lesson to the entire country and especially to Washington. If the government and the political class that runs it would stop trying to exploit immigrants for the cheap votes they offer and if Big Business would stop trying to use them for the cheap labor they bring, they might discover that the nation is a good deal better off when it enforces its border security and protects its own people; the immigrants themselves might find out that they're better off staying in their own country than trying to sneak into somebody else's; and the Mexican ruling class might actually have to do something to help itself and its own people rather than dumping them on us.

In short, we might all find out what Robert Frost tried to tell us a long time ago: Good fences make good neighbors.