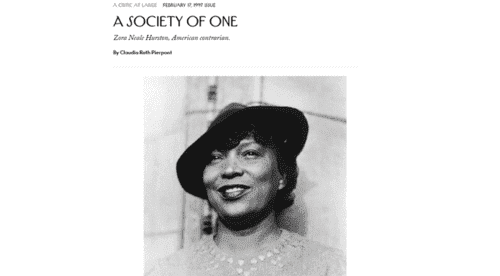 "The Price I Paid For Civilization"—Zora Neale Hurston on Blacks, BROWN and the American Nation State

One of the best-known black authors is Zora Neale Hurston. Hurston was a key literary figure in the 1920s-1930s Harlem Renaissance who received a moderate level of fame and critical acclaim at the time for her novels Their Eyes were Watching God and Jonah's Gourd Vine, and for her anthropological studies of black culture, documented in her book Mules and Men. Still, none of these books sold more than 5,000 copies before they went out of print. In the 1950s she fell into poverty and obscurity and worked as maid and a substitute teacher. She died in a welfare home in 1960.

In 1975, black feminist Alice Walker published a cover piece on Hurston for Ms. and since then there has been an incredible renewal of interest in her work. Hurston's books have sold millions of copies, her works have semi-officially been deemed part of the American canon by the Library of America, and dozens of books have been written about her and her work. 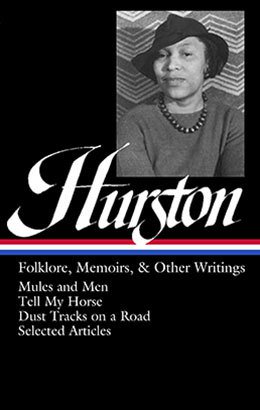 Because multiculturalists and feminists almost exclusively created Hurston's revival, she is commonly seen as a proto-feminist and Black Nationalist. But in reality, Hurston was a staunch conservative. She was a supporter of Joseph McCarthy and Robert Taft, she frequently denounced the New Deal—and she famously opposed the Supreme Court's Brown vs. Board of Education decision, fifty years old today.

I have already written on Hurston's politics for Lewrockwell.com and The American Conservative. In this article, I will focus on her views on race, the role of blacks in the American nation state—and Brown.

To understand Hurston's view on race, one must first look at her unique upbringing in Eatonville, Florida.

Eatonville, founded in 1887, was the first town that was chartered for blacks. In Hurston's words it was

"a pure Negro town—charter, mayor, council, town marshal and all. It was not the first Negro community in America, but it was the first to be incorporated, the first attempt at organized self government on the part of Negroes in America."

Hurston was very proud of her town, and her father served as its mayor. She appreciated the independent culture, community, and enterprise that a self-sufficient black town made possible. Dozens of other towns like this popped up—many of which have been documented by a modern African-American maverick, Elizabeth Wright, in her newsletter Issues and Views.

Hurston attended Barnard College and studied under Franz Boas. Boas was of course a huge fraud who was responsible for the nurture-over-nature environmentalist school that continues to plague anthropology today. But while Hurston greatly admired Boas, her work under him was harmless and consisted of documenting the vibrant culture of blacks throughout the South and the Caribbean.

Hurston was proud of black culture—but unlike some of today's Afro-centric scholars, she did not try to give blacks credit for things they did not do. She mocked blacks who claimed that Alexander Hamilton or "that Greek whore" Cleopatra were black, or that blacks were responsible for inventions clearly made by whites. She also recognized that Africa was not a utopia and that it was Africans who sold her ancestors into slavery.

For this reason, Hurston did not feel a sense of victimhood because she was the descendent of slaves. She accepted that she would not have had access to many of the institutions of the West like capitalism, Christianity, and the rule of law were it not for slavery.

In a November 1943 article for H.L. Mencken's American Mercury entitled "Negroes without Self Pity" she bemoaned blacks that believed,

We were brought here against our will. We were held as slaves for two hundred and forty-six years. We are in no way responsible for anything. We are dependents. We are due something from the labor of our ancestors. Look upon us with pity and give!

In her famous essay How It Feels to Be Colored Me she wrote, "Someone is always at my elbow reminding me that I am the granddaughter of slaves. It fails to register depression with me. Slavery is sixty years in the past."

Instead of lamenting that slavery was the source of all of blacks' troubles, she proclaimed, "slavery is the price I paid for civilization."

However, Hurston was not an Uncle Tom (or Aunt Chloe) who simply wished to please whites. Rather she saw blacks as a group who could and should help themselves and did not need the pity of liberal whites.

In fact, she felt that in many ways blacks who constantly searched for the assistance of whites were being disrespectful for their race. She called this "The 'Pet Negro' System" in a May 1943 article in The American Mercury. A select few blacks would constantly bemoan the plight of their race and the racism of the South to please white Northern liberals. These blacks would get patronage from the liberals, and the liberals would feel good about themselves. But the actual condition of most blacks remained unchanged.

Hurston wrote that a Northern liberal would "stroll up to you, cocktail glass in hand, and say, 'I am a friend of the Negro, you know and feel awful about the terrible conditions down there.' That's your cue to launch into atrocities amidst murmurs of sympathy."

One writer who fit this Pet Negro profile was author Richard Wright. Wright's books constantly portrayed the South as a bastion of hatred where seraphic blacks were victimized by evil whites. Thurston denounced this as "the sobbing school of Negrohood." In a review of Wright's Uncle Tom's Children, which appeared in the April 2, 1938 edition of The Saturday Review, Hurston wrote that he created a

"picture of the South that the communists have been passing around of late. A dismal, hopeless section ruled by brutish hatred and nothing else. Mr. Wright's author's solution, is the solution of the Party—state responsibility for everything and individual responsibility for nothing, not even feeding one's self. And march!"

It was Hurston's unyielding belief that blacks were capable of uplifting themselves that led to her famous opposition to the Brown vs. the Board of Education, Topeka, Kansas decision.

On August 11, 1955 Hurston wrote a letter to the editor of the Orlando Sentinel that was republished in newspapers across the South. Hurston correctly saw the decision as a "trial balloon" for future judicial activism. Hurston also predicted that the decision was "a relatively safe one, since it is sectional and on a matter not likely to arouse other sections of the nation to the support of the South. If it goes off fairly well, a precedent has been established. Govt. by fiat can replace the Constitution."

In this judgment, she was prophetic. It was not until the forced busing decisions over a decade later that the rest of America realized what the Warren Court had gotten them into.

Not just the constitutional problems of Brown upset her. It is widely believed that Brown overturned Plessy vs. Ferguson. But in reality it claimed to merely update the decision to reflect the modern sociological theories of Kenneth Clark and Gunnar Myrdal. The basis of Warren's decision was that separate but equal schools were inherently unequal because of the damage they would inflict upon the black student's psyche. According to Warren, the issue of constitutionality of segregated schools

"cannot turn on merely a comparison of these tangible factors (i.e. facilities, curricula, teachers etc.) in the Negro and white schools involved in each of the cases. We must look instead to the effect of segregation itself on public education…

"We come then to the question presented: Does segregation of children in public schools solely on the basis of race, even though the physical facilities and other "tangible" factors may be equal, deprive the children of the minority group of equal educational opportunities? We believe that it does.

According Hurston, "if there are adequate Negro schools and prepared instructors and instructions, then there is nothing different except the presence of white people."

She believed that "[s]ince the days of the never-to-be-sufficiently deplored Reconstruction, there has been current the belief that there is no great[er] delight to Negroes than physical association with whites."

Hurston saw this logic as "insulting rather than honoring my race." She believed, "the whole matter revolves around the self-respect of my people. How much satisfaction can I get from a court order for somebody to associate with me who does not wish me near them?"

This is not to say that Hurston approved of Jim Crow laws. She wrote several articles denouncing them. One of them, entitled "Crazy for This Democracy," was published in the December 1945 issue of Negro Digest. In that article, Hurston questioned why Americans were speaking in universalistic platitudes about bringing democracy to various Third World countries, while denying it to blacks at home. Hurston wrote

"I accept this idea of democracy. I am all for trying it out. It must be a good thing if everybody praises it like that. If our government has been willing to go to war and sacrifice billions of dollars and millions of men for the idea I think that I ought to give the thing a trial.

"The only thing that keeps me from pitching head long into this thing is the presence of numerous Jim Crow laws on the statute books of the nation. I am crazy about the idea of Democracy I want to see how it feels."

Hurston strongly believed that America should fix its own problems before pushing its views on the rest of the world.

But while Hurston did not fully absolve whites for the race problem, she felt that blacks needed to make changes as well. She affirmed the view of black educator Lance Jones: "the Negro being in part responsible for lack of progress by his own indifference to consequences." She also felt that efforts to place unqualified blacks into positions of power were counterproductive.

She was particularly hard on Reconstruction, which she felt was largely responsible for the racial problems in America. In a review of Jones' book she commented that Reconstruction was nothing but

"…a second forceful conquest by the carpetbaggers, by the setting up of Negro Governments inadequate to their fate, the inevitable result being immediate chaos and violence and bitterness that is just now beginning to wane."

Hurston also deplored the inadequate black politicians promoted during the New Deal who she blamed for the race riots of 1936. Because of them,

"crime in Harlem is rampant, and the police are helpless because the New Deal-promoted Negro Politicians immediately let out a scream that Negroes are being persecuted the minute a Negro thug is arrested."

Hurston's views on race were not entirely consistent. She changed her position on the Fair Employment Practices Commission and she occasionally waffled on Jim Crow. However, several strains of her thinking were very clear. She was very proud of Black American culture. She abhorred patronizing white liberals. She believed that racial progress could only be made if both races agreed—and if it were done by constitutional means.

Unfortunately, few of these ideas have been practiced—least of all in Brown.

Marcus Epstein is an undergraduate at the College of William and Mary in Williamsburg, VA, where he is president of the college libertarians and editor of the conservative newspaper, The Remnant. A selection of his articles can be seen here.