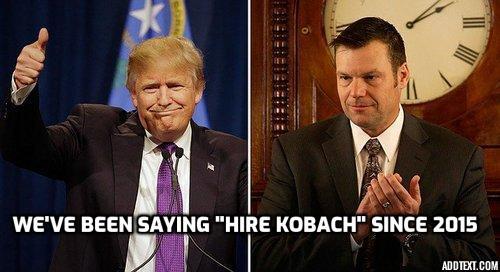 Homeland Security secretary Kirstjen Nielsen is out, giving President Trump a golden opportunity to bring Kris Kobach into the administration.

Early speculation says Energy Secretary Rick Perry—a cuck on immigration—is the top contender, but we have no clear idea. It’s likely a positive move that Nielsen is gone and someone new can take over. Kobach should get the job but there is another position he can fill if he doesn’t get nominated: immigration czar.

The last week saw the President display a new fire on immigration. threatening to shut down the border and make personnel changes in a patriotic immigration direction.

Trump declared “our country is full” on Friday and said we can’t take in any more illegal migrants.

“There is indeed an emergency on our southern border,” Trump said while visiting the border. “It’s a colossal surge and it’s overwhelming our immigration system, and we can’t let that happen. ... We can’t take you anymore. We can’t take you. Our country is full.”  [‘Our country is full’: Trump says migrants straining system, by Zeke Miller and Jonathan Lemire, Associated Press, April 6, 2019]

Yet, Trump backed down last week from the one idea that could effectively send this message.

Trump announced on Thursday he would wait a year for Mexico to contain the crisis instead of closing the border right now. The announcement followed a week of threats and tweets saying he would shut it down if Mexico did nothing to halt the migrant wave into the U.S. The threat was a dramatic response to the border crisis that has overwhelmed American resources and witnessed record high illegal entry. [Trump Backs Off Threat to Shut Down Border With Mexico, by Alex Leary and Josh Zumbrun, The Wall Street Journal, April 4, 2019]

A shutdown of the border would significantly reduce the number of illegal entries and free up detention space, allowing the administration to renege on its order. It would put pressure on Democrats to consider an increase in detention facility bed space and other resources to re-open the border. Sadly, it’s not going to happen. The backtrack was pathetic, but it at least shows Trump wants to do something about the border.

While the capitulation was a disappointment, the White House has shown it still wants to curb illegal immigration.

The administration is quadrupling the number of alleged “asylum seekers” deported back to their home countries due to the crisis. [US struggling with growing number of asylum seekers, by Colleen Long, Associated Press, March 31, 2019]  Trump announced on Twitter Saturday that he would send more Border Patrol agents to handle the crisis and would exert more pressure on Democrats to do something about immigration.

The president withdrew his nominee for Immigration and Customs Enforcement director, Ron Vitiello, because he wants to go in a “tougher direction.” According to CNN, Stephen Miller urged the president to pick new nominee because Vitiello opposes closing the border. [Trump suddenly pulls ICE nominee to go with someone 'tougher', by Priscilla Alvarez, Geneva Sands, Kaitlan Collins, Jeremy Diamond and Jim Acosta, CNN, April 5, 2019] Ann Coulter suspects there may be something nefarious in this move, but the initial glance suggests this is a positive move.

The top contenders for the job are Kris Kobach and Ken Cuccinelli, neither of whom is a cuck on immigration. [Trump considering naming an ‘immigration czar’, by Jill Colvin and Colleen Long, Associated Press, April 2, 2019] But Kobach is the far superior candidate. VDARE.com readers know Kobach’s reputation and how we was instrumental in the creation of patriotic immigration reforms such as Arizona’s SB1070. There is no one who is more qualified to handle immigration policy than Kobach. His appointment would be excellent for immigration patriots.

The immigration patriot has already offered his plan to resolve the border crisis. Kobach’s three-part plan proposes the publication of a DHS regulation that would override the Flores Settlement, which limits the amount of time the government can detain illegal alien minors. The plan would streamline border processing centers to both hold illegals and conduct their hearings. Kobach’s proposed processing centers would also come with aircraft to speedily deport illegals. The final part of the plan calls for a Treasury regulation that would end remittances sent home by foreign nationals who cannot prove their legal status. This proposal would be used to pressure Mexico into housing asylum seekers who try to enter the U.S. through the southern border and pitch in money for the wall. According to Kobach, “[t]he threat of ending remittances from illegal aliens is a far more powerful than threatening to close the border.” [Three Steps to Solve the Border Crisis, by Kris Kobach, Breitbart, April 4, 2019]

This plan sounds fantastic and would make significant progress in curbing illegal immigration. It’s further proof that Kobach is perfect for immigration czar.

The other contender, Ken Cuccinelli, is not bad but he is no Kris Kobach. As Virginia attorney general, Cuccinelli supported Arizona’s SB1070 law and authorized a similar measure in his state. [Virginia legal opinion supports checks of immigration status, by Anita Kumar and Rosalind Helderman, The Washington Post, August 3, 2010] Last year, Cuccinelli said Trump could stop migrant caravans with his constitutional “war powers” and urged the president to use them. [Ken Cuccinelli: States Can Stop Migrant Caravan ‘Invasion’ with Constitutional ‘War Powers’, by John Binder, Breitbart, October 23, 2018]

However, there are serious problems with Cuccinelli. In 2016, he was an ardent Never Trumper who tried to derail Trump’s nomination at the Republican National Convention. He threw a temper tantrum on the convention floor when Trump officially secured the nomination. [Convention Floor Erupts After Never Trump Action Fails, by Zeke Miller and Alex Altman, Time, July 18, 2016] Kobach, in contrast, endorsed Trump in the primaries and has always shown his loyalty to the president. Cuccinelli also ignored immigration patriotism when he ran for Virginia governor in 2013 and his campaign attacked Terry McAuliffe from the Left on the issue.

It would be a total Trump move to pick the Never Trumper over the loyalist for immigration czar, but Cuccinelli’s RNC actions may be too much to forgive. The possible contender is former ICE chief Thomas Homan, another solid figure on immigration but who would still be inferior to Kobach. Overall, an immigration czar would be a net positive, especially if it’s Kobach.

If the White House is worried Kobach can’t make it through Senate confirmation, there is no reason the administration shouldn’t appoint him immigration czar.

The first thing a czar should oversee is the immigration plan Jared Kushner is working on. Details have been scant on Kushner’s negotiations besides the terrible groups that have been invited to them, such as the Chamber of Commerce and the Libre Initiative, the Koch brothers Hispanic outreach group. Politico offered a clearer picture of the negotiations this week. [As Trump rages over border, Kushner quietly plans legal immigration boost, by Anita Kumar, Politico, April 3, 2019]

Kushner was given the task to negotiate an immigration because Trump was impressed by his work on criminal justice reform. Apparently the president thinks his son-in-law is a terrific dealmaker.

It also appears the possible deal won’t include a pathway to citizenship for DREAMers or any other illegal aliens. The Watcher has previously noted it was possible the White House’s plan may include some form of amnesty, but Politico’s report doesn’t mention it.

The Politico report implies the main group the Trump administration wants to appease are immigration patriots, not Democrats. This is good because it will likely create a deal that Democrats could never accept and doom any increase in guest worker visas. Any proposal that includes any cuts to legal immigration will be rejected by Democrats, but that’s something Miller and an immigration czar would likely insist on.

That’s good news for immigration patriots. It is probably best for the country that we have a failed deal. The Watcher has previously noted that the chances of a grand immigration bargain are a slim if Republicans’ main priority is healthcare. The GOP’s limited political capital will be wasted on that fight, leaving little for another battle to promote corporate interests.

It’s a safe bet to say this immigration proposal won’t make it through Congress and may never even be announced. It would discredit Kushner in Trump’s eyes and possibly refocus Trump on putting America first when it comes to immigration.

The plan the administration should pursue is Kobach’s proposal to solve the border crisis. Making him immigration czar or DHS secretary would restore immigration patriot trust in the president. Trump’s gonna need it for 2020.