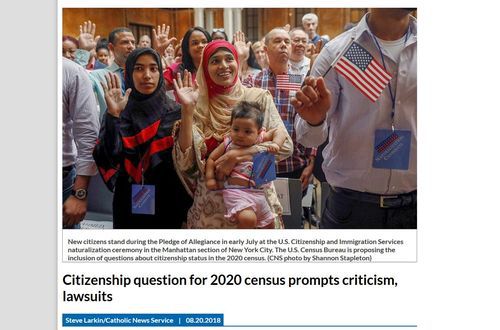 U.S. Stuck With Racial Division. The Census Should Measure It Scientifically

The next US Census is scheduled for 2020. Apparently the Trump Administration has not fallen for Obama Era plans to change the questions on race to further reconstruct America, although it does want to revive the 1890-1950 practice of asking about citizenship, shamelessly opposed by the usual suspects and the kritarchy.[See Citizenship question for 2020 census prompts criticism, lawsuits, by Steve Larkin, Catholic News Service, August 20, 2018  and Trump Officials Say They Can't Recall Discussing Census Citizenship Question, by Hansi Lo Wang, NPR, September 5, 2018] Which is good, but what’s really necessary is to go onto the offensive: make the census questions reflect what modern science says about “race.”

America’s Ruling Class has a schizophrenic attitude towards race. If you want to talk about issues like crime or immigration, then “race” is a social construct with no biological basis and if you disagree then you’re worse than Hitler. However, when it comes to Affirmative Action, or noticing that minorities disproportionately suffer from certain congenital illnesses, then “race” magically becomes both biological and painfully real.

The problem, as two recent books on race show in painstaking detail: the racial categories used on all government forms in the US are, biologically, nonsense.

But in his soon-to-be-published book, Race Differences in Psychopathic Personality, British psychologist Professor Richard Lynn sets out a huge body of data implying that US race categories are simply not fit for purpose.

A “race,” he tells us, is a breeding population separated long enough from another breeding population to have adapted to a different ecology, leading to consistent differences in average gene frequencies between the populations. This is important because, as Lynn shows, “race,” therefore, expresses itself in consistent interrelated physical and mental differences, which tend to differ in the same direction because they are adaptations to distinct environments. Thus, different races have different genetic disease profiles, different dominant blood groups, different average IQ, and different modal personalities.

Another recent book, J. Philippe Rushton: A Life History Perspective by Lynn’s colleague Edward Dutton, presents evidence for the minutiae of these consistent race differences: in age at menopause, in the kind of face and body found the most attractive, in preference for oral over vaginal sex, and even in ear wax composition.

These studies set out the genetic assay data which proves that there are about 10, and possibly 12, distinct races:

The last two are sometimes being subsumed into “African” while North African, Arabs and South Asians are sometime merged into “Non-European Caucasian.” Lynn’s book demonstrates that these races differ in something as important as as average level of psychopathic personality; a condition defined by reckless behavior, criminality, impulsivity, cheating, marital breakdown, selfishness and lack of empathy. So, simply to stay safe, it’s worth properly understanding what the actual “races of man” are. And understanding this reveals what nonsense official US race categories are.

This makes sense, of course, because Pacific Islanders broke away from Southeast Asians. To put it another way, the category “API” is a bit like having a race group called European-Australian Aborigine, the difference between these races being only slightly more than that the between Pacific Islanders and Native Americans.

The latter, being so different, also have far higher rates of psychopathic personality. 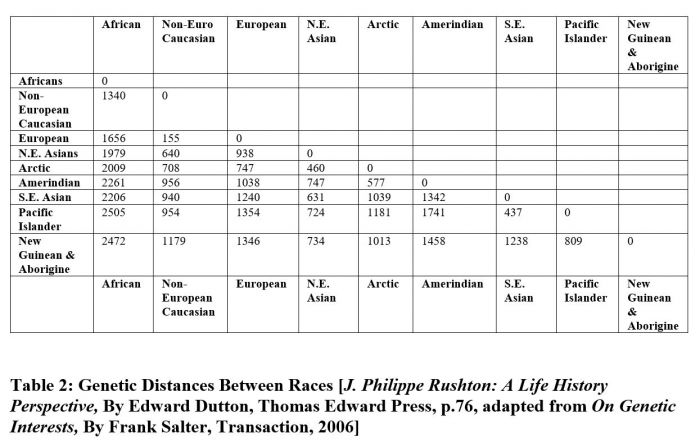 The category “Asian” is also extremely problematic, as it encompasses Northeast Asians, Southeast Asians and South Asians; the latter often stretching to include Middle Easterners and North Africans.

In other words, the category “Asian” has zero basis in genetics. It’s only slightly more justifiable than combining Indians and Inuit into one racial category.

But this falls apart with the API category. Not only do Pacific Islanders have higher levels of psychopathic personality than Asians or Europeans but, due to the complications of racial migrations and separations, they are more similar to Australian Aborigines than they are to South Asians.

And as Lynn explains, the category Hispanic—though it has some utility—is basically a mess.

Clines mean that there is a cultural element to “race.” Why are Greeks European but Western Turks not? There are always things that don’t quite fit into any system of categories.

But let’s be clear: from a genetic perspective, “race” exists and predicts very important things, such as psychopathic personality.

America’s official racial categories, however, predict very little…possibly because those who come up with them find it so psychologically conflicting to have to think about “race" at all.