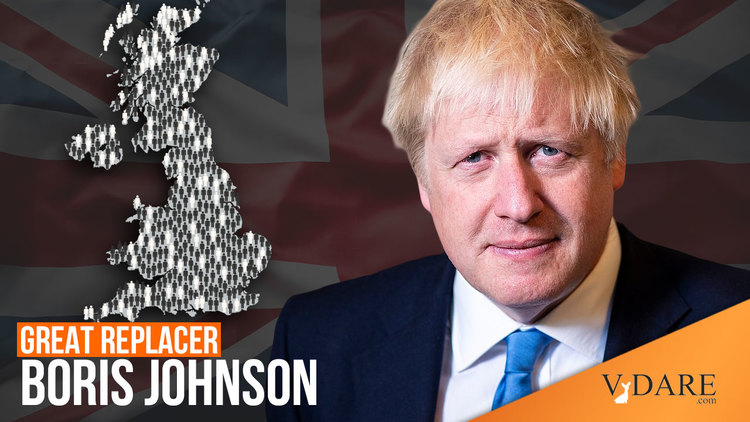 Tuesday’s UK Tory leadership debate was called off when presenter Kate McCann collapsed on camera [TV debate between Rishi Sunak and Liz Truss called off after presenter faints – as it happened, by Andrew Sparrow and Rachel Hall, Guardian, July 26, 2022].  Which seems somehow symbolic:  from the point of view of the British nation-state, this race is going nowhere.

Prime Minister Boris Johnson, who had a truly historic opportunity to turn the Tories into a National Conservative party, is leaving office a failure and will be replaced by someone who will probably do even worse. The Conservative Party learned nothing from its own victories and failed to deliver for working-class Britons, instead becoming a Politically Correct business lobby. Much as the GOP still seems trapped by Reagan-era platitudes, the Tories were still mouthing Thatcherite slogans, with both former Chancellor of the Exchequer Rishi Sunak and Foreign Secretary Liz Truss, now his remaining opponent, offering nothing in the initial rounds of the leadership contest that would appeal to the crossover Labour voters who delivered on Brexit. Immigration, running at record levels, has been essentially ignored. The fact is that the United Kingdom, a surveillance state with speech codes, is no longer a free country and the English people have no representation in what is ostensibly their land [Once Great Britain Under Occupation, by Gregory Hood, American Renaissance, December 1, 2017].

Johnson himself had a clear mandate following a crushing victory in 2019 that threw Labour into open despair and raised the possibility of a political realignment. This continued with a by-election victory in a critical Labour seat in 2021. Significantly, Johnson’s victories were not just preceded by talk about Brexit, but about restricting immigration. Johnson said in June 2019 that businesses can’t be allowed to access “unlimited pools” of immigration and said he’d “focus on the issues that drove Brexit,” of which immigration is obviously the most important.

But what did Johnson do once in office? He enabled the Great Replacement, massively increasing immigration, especially from Pakistan (up more than 255% since 2019), Nigerian (415%), and Indian (164%). His government made sure to conceal information on the non-white grooming gangs plaguing the country. When China began cracking down on protesters in Hong Kong (a former colony which the British cravenly abandoned), Johnson offered extended visas to an estimated 3 million people—the equivalent of America’s admitting 14.8 million people. It would be treason here and it was treason there. Johnson’s government seemed almost as eager as the Biden Regime to replace citizens with foreigners.

Instead, Johnson seized on the invasion of Ukraine with fanaticism, perhaps imagining himself as a world-historic figure similar to the way he portrayed Winston Churchill in his book The Churchill Factor [Boris Johnson Praised by Zelensky Allies–‘Churchill’-esque, by David Brennan, Newsweek, July 7, 2022].  He enjoyed public (and media) support for his hawkish policy, which may be the cynical reason he stuck to it so desperately [More Britons back Boris Johnson’s handling of Ukraine war, new poll reveals, Nicholas Cecil, Evening Standard, May 3, 2022].

Johnson may even be one of the main reasons the war is continuing, as he allegedly urged the Ukrainian president to ditch peace talks with Russia [Boris Johnson Pressured Zelenskyy to Ditch Peace Talks With Russia: Ukrainian Paper, by Jake Johnson, Common Dreams, May 6, 2022]. But the continuing war in Ukraine is exacerbating the UK’s economic problems.

Johnson also uttered some cringe-worthy rationalizations to win over the Woke, saying that Putin’s actions were the result of “toxic masculinity” [Putin’s ‘toxic masculinity’ to blame for Ukraine war, Boris Johnson says, by Jennifer Hasson, Washington Post, June 29, 2022]. Catherine the Great could not be reached for comment. Perhaps this is what’s going to pay off for Johnson; he is rumored to be the next Secretary-General of NATO, unless the French veto it [Boris Johnson tipped to become next secretary general of NATO, by Christopher Hope, Telegraph, July 26, 2022].

Johnson got Brexit done, but other than that, he blew any chance to help working-class Britons. Pollster Matt Goodwin argued that Johnson had “grasped the new unwritten law of politics which is you really need to lean a little bit left on economics and a little bit right on culture and identity to unlock lots of territory, lots of seats you didn’t previously have” [What the British Elections Mean for Whites, by Gregory Hood, American Renaissance, December 17, 2019]. But the petty scandals that brought him down, including breaking his own government’s COVID-19 regulations and then lying about it, smacked of the worst limousine liberal double standards [Why working-class Tories have turned on Boris Johnson, by Paul Mason, New Statesman, January 19, 2022]. He may have broken the Tories’ entire electoral majority, as Labour now has a strong lead in polls [Labour opens up 10-point lead over Tories as Boris Johnson’s popularity plunges to equal Corbyn’s nadir, by Hugo Gye, iNews, July 6, 2022]. Even Brexit currently looks like a liability, with a majority now saying they were wrong to leave in a recent poll commissioned by Matt Goodwin.

What comes next? Neither Sunak nor Truss provides much hope for Conservatives who want to put Britain first. Sunak is a former Goldman Sachs hedge manager, married to the heiress of a major Indian tech company, who joked when he was a young man that he had no working class friends [Rishi Sunak, heir apparent who ran afoul of Boris Johnson, by Jill Lawless, Associated Press, July 20, 2022]. He’s practically a caricature of someone Labour would want to run against. “I will be the heir to Margaret Thatcher,” he promised in The Telegraph on July 20, at a time when the Conservatives need to win back wavering ex-Labour voters who never liked her.

Meanwhile, Liz Truss has gone to the length of dressing like Thatcher as she tries to channel the Iron Lady [Liz Truss Copies Margaret Thatcher Style ‘Down To Last Detail’ At Leadership Debate, by Saman Javad, Independent, July 16, 2022].

The fact that she thinks noticing this is sexist and “frustrating” tells us she probably won’t be much good in fighting Political Correctness [Truss says claims she modelled herself on Thatcher are sexist and ‘frustrating,’ by Thomas Kingsley, Independent, July 21, 2022].

Truss has distinguished herself by promising tax cuts instead of focusing on inflation [Rishi Sunak refuses to match Liz Truss on tax cuts, by George Parker, Jim Pickard, and Jasmine Cameron-Chileshe, Financial Times, July 21, 2022]. She’s also positioned herself as being more pro-Brexit than Sunak, even though she voted Remain [‘Red Rishi’: Is a Brexit-backing Thatcherite too left-wing for the UK Conservatives?, by Annabelle Dickson and Jack Blanchard, Politico, July 20, 2022].

Thus, once again, grassroots conservatives are being told to trust someone who wasn’t on their side on the most important British issue since the end of the Cold War.

Using Matt Goodwin’s polls, we find that immigration is now the most important issue to grassroots conservatives, even surpassing controlling the cost of living.

Immigration is the top issue for UK voters, but it's not being mentioned in Tory Leadership debates. Sounds familiar. https://t.co/sV9H3t3biX

Yet the candidates haven’t been talking about it [Liz Truss and Rishi Sunak ignore key issue that is crucial to winning Tory leadership race, by Dan Falvey, Express, July 21, 2022]. Conservatives want candidates to focus more on immigration than tax cuts, but they aren’t getting what they asked for [Sunak and Truss must focus on cost of living and immigration – Tory voters, by Christopher McKeon, Independent, July 21, 2022]. Both candidates are weak on immigration and multiculturalism generally, and they were no different from the others before the field was winnowed down to two [TV Debate For Candidates To Replace Boris Ignores Immigration, Law And Order, Free Speech, by Jack Montgomery, Breitbart,  July 17, 2022].

Though Conservative voters are 97% white, party managers practiced a kind of Affirmative Action, selecting people of color (and women) to put in prominent leadership spots [Will Britain’s Next Prime Minister Be a Person of Color?, by Billy Perrigo, Time, July 19, 2022]. That’s one major reason we even know who Sunak is to begin with.

Sunak’s most recent contribution to the immigration battle was attempting to block Boris Johnson’s “Rwanda Policy,” which sought to deport asylum seekers to Africa. Sunak also repeatedly refers to his immigrant origins, a warning sign for those who want the actual British people to have a voice in their government [Rishi Sunak ‘hoped to block’ project to send migrants out to Rwanda when he was Chancellor, by Glen Owen and Anna Mikhailova, Daily Mail, July 18, 2022]. (He now supposedly backs the Rwanda plan, but talk is cheap.)

In a 2019 debate, Truss said that “I don’t think there is anyone who would advocate simply closing our borders.”

Yet that’s precisely what is needed. More than that, if Conservatives want to build on past victories, they need to give British workers a reason to vote for them by increasing wages and reducing the cost of living. Restricting immigration does both by tightening the labor market and loosening demand on housing.

There was some positive movement in their previous debate. Rishi Sunak at least addressed the issue, arguing for limiting legal immigration (via the number of refugees). He even suggested keeping illegals on cruise ships—rather similar to John Derbyshire’s proposal that they be housed in “hulks.” Ominously, Truss immediately attacked this as a violation of “international law” [What Liz Truss and Rishi Sunak are saying about immigration, The Week, July 25, 2022].

Still, the fact that Sunak has gotten this far is earning him some accusations of essentially racial treason from the Indian media, which wants England’s first non-white Prime Minister to essentially open the borders [Why Rishi Sunak could be a brilliant PM–except for his shameful record on immigration, by Jyoti Malhotra, ThePrint, July 26, 2022]. If that’s the standard, then not one non-white should have ever been allowed into England. Hey, that’s not much different than what Winston Churchill wanted with his suggested policy of “Keep England White.”

Truss restated her support for the “Rwanda Policy” on July 24, which is something.

I am determined to see our Rwanda policy through, to ensure our borders are secure and that we back our Border Force.

The critical problem: both Truss and Sunak are looking for the soft option—outsourcing border security to other countries.

Is this what the British Empire has been reduced to, begging its former colonies for help?

Truss also said she would consider “all turnaround tactics to deter migrant crossings,” but the Conservative government already abandoned turning back small boats after a legal challenge [Truss pledges to expand Rwanda scheme to other countries as Sunak promises to make policy work, Sky News, July 23, 2022]. Why should anyone believe her now?

The Conservatives have been in power since 2010, and immigration has only grown worse under their leadership, despite being told time and again by their base that they want it limited, if not stopped.

This is no time for reliving the 1980s. The Iron Lady may have been right for her time, when labor unions threatened to plunge the whole country into chaos. Yet today’s Britain faces different challenges from multiculturalism and mass immigration, and there’s nothing concrete to show Johnson or either of his possible heirs intended or even intend to do much about it.

It will cost the Conservatives their majority; it may cost the British people their country.

James Kirkpatrick [Email him | Tweet him @VDAREJamesK] is a Beltway veteran and a refugee from Conservatism Inc. His latest book is Conservatism Inc.: The Battle for the American Right. Read VDARE.com Editor Peter Brimelow‘s Preface here.