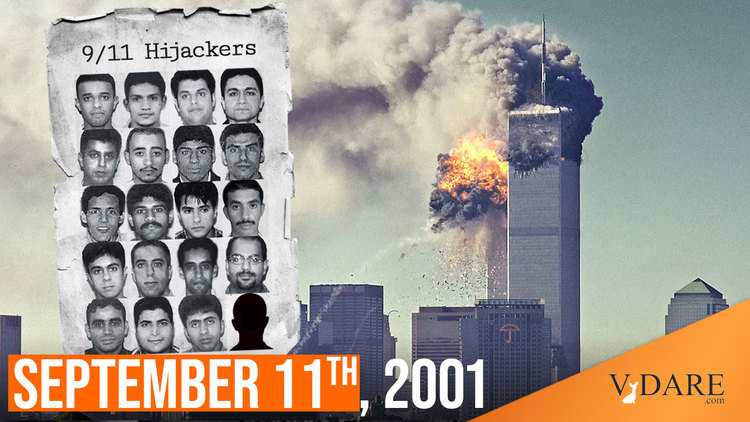 Why They Attack Us

"We're at war," the young waitress, her voice catching, informed me when I first heard of the terrorist attacks on the World Trade Center and the Pentagon this week. She was hardly the only one. "America at war," the Washington Times' lead editorial pronounced the next day. "It's WAR," screamed its editorial cartoon.  A "new kind of war has been declared on the world's democracies," the Wall Street Journal's editorial pontificated.  "The War against America" was the subject of the New York Times editorial. "A state of war," the Washington Post called it. "This is war," pronounced columnist Charles Krauthammer. "They were acts of war," confirmed the President of the United States.  Well, it probably is—except that, even as everyone from waitresses to the president was declaring war or howling for it, nobody was exactly sure who we were at war with. The usual suspect was the shadowy Osama bin Laden, though some experts said the attacks didn't fit his profile, and even if we were sure, no one seemed able to say how we should wage the war, how we could win it, or what would constitute victory. Mainly, what most Americans wanted to do—entirely understandably—was to blow the hell out of somebody or something. No doubt, in time, we will.

But the blunt truth is that the United States has been at war for years—at least a decade, since we launched a war against Iraq in 1991, even though Iraq had done absolutely nothing to harm the United States or any American. Our bombing attacks on Iraq certainly caused civilian casualties, and if they were not deliberate, nobody beating the war drums at the time felt much regret for them. For ten years, we have maintained economic sanctions on Iraq that have led to the deaths of hundreds of thousands of civilians, and we have repeatedly bombed it whenever it failed to abide by standards we imposed on it.

Under Bill Clinton, we again launched bombing raids against civilians—once against so-called "terrorist training camps" supposedly under bin Laden's control in Afghanistan and at the same time against a purported "chemical weapons factory" in Sudan that almost certainly was no such thing. The attacks just happened to occur on the same day as Monica Lewinsky's grand jury testimony that she had engaged in sex with the president. "This is unfortunately the war of the future," Secretary of State Madeleine Albright said in justifying the U.S. raids, officially launched in retaliation for terrorist attacks on American embassies.

Later the same year, Mr. Clinton ordered (but later countermanded) yet more missile attacks on Iraq—the day after the Paula Jones sex scandal was settled in court. Later yet again Mr. Clinton ordered more bombings in Iraq the day before Congress was scheduled to vote on his impeachment. Then there are the Balkans, where the United States has waddled forth to war for no compelling reason, and where it has also slaughtered civilians with its unprovoked bombings.

In all the buckets of media gabble about the terrorist attacks in New York and Washington, not once have I heard any journalist ask any expert the simple question, "Why did the terrorists attack us?"

There is, of course, an implicit answer to the unasked question: It's because the terrorists are "evil"; they "hate democracy"; they are "fanatics," "barbarians" and "cowards."  Those, of course, are answers that can satisfy only children. Some day it might actually dawn on someone in this country that the grown-up but unwelcome answer is that the terrorists attacked us because they were paying us back for what we started.

Let us hear no more about how the "terrorists" have "declared war on America." Any nation that allows a criminal chief executive to use its military power to slaughter civilians in unprovoked and legally unauthorized attacks for his own personal political purposes can expect whatever the "terrorists" dish out to it. If, as President Bush told us this week, we should make no distinction between those who harbor terrorists and those who commit terrorist acts, neither can any distinction be made between those who tolerate the murderous policies of a criminal in power and the criminal himself.

The blunt and quite ugly truth is that the United States has been at war for years—that it started the war in the name of "spreading democracy," "building nations," "waging peace," "stopping aggression," "enforcing human rights," and all the other pious lies that warmongers always invoke to mask the truth, and that it continued the war simply to save a crook from political ruin. What is new is merely that this week, for the first time, the war we started came home—and all of a sudden, Americans don't seem to care for it so much.