After the massacre of five Dallas cops, during a protest of police shootings of black men in Louisiana and Minnesota, President Obama said, "America is not as divided as some have suggested."

Former D.C. Police Chief Charles Ramsey, an African-American, says we are "sitting on a powder keg."

Put me down as agreeing with the president. For when a real powder keg blew in the '60s, I was there. And this is not it.

In 1965, the Watts area of Los Angeles exploded in the worst racial violence since the New York draft riot of 1863 when Lincoln had to send in veterans of Gettysburg. After six days of looting, shooting and arson in LA, there were 34 dead, 1,000 injured, 4,000 arrested.

In 1967, Newark, New Jersey, and Detroit exploded, bringing out not only the Guard but the 82nd Airborne. After Dr. King was assassinated on April 4, 1968, a hundred American cities burst into flame.

Troops defended the White House. Marines mounted machine guns on the Capitol steps. Thousands of soldiers patrolled the city. The 7th and 14th street corridors of my hometown, D.C., were gutted and would not be rebuilt for years. That was a powder keg—that went off.

But only crazed cop-haters applaud that Dallas atrocity by the delusional anti-white racist Micah X. Johnson. As for the shootings of Philando Castile in Minnesota and Alton Sterling in Baton Rouge, almost all agree they must be investigated, and justice done.

Chief Ramsey says he expects trouble at the conventions. But if Black Lives Matter shows up to raise hell in Cleveland, then that is going to be a problem for Hillary Clinton.

This writer was on the 19th floor of the "Comrade Hilton" in August 1968, looking down as Mayor Daley's finest marched up Balbo to Michigan Avenue, then stormed into Grant Park to deliver street justice to the radicals calling them "pigs." 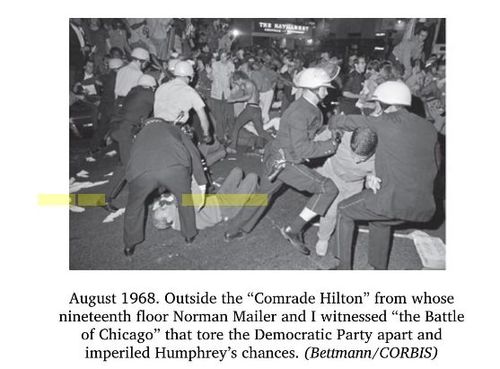 Picture and caption from Pat's book The Greatest Comeback: How Richard Nixon Rose From Defeat to Create the New Majority

"A police riot" liberals raged. The cops beat "our children" up.

Richard Nixon came down on the side of the cops, carried Illinois and won the election. Liberals were still calling "law and order" code words for racism. Most Americans had come to recognize they were the indispensable elements of a decent and civilized society.

"Richard Nixon," lamented Hunter S. Thompson, "is living in the White House today because of what happened that night in Chicago."

This weekend, Rudy Giuliani called Black Lives Matter "inherently racist." Does he not have a point?

After the death of  Eric Garner in a police takedown, Black Lives Matter led mobs onto the streets and highways of Manhattan chanting, "What do we Want? Dead Cops! When do we want them? Now!"

In anti-police demonstrations since, another chant has been, "Pigs in a blanket, fry 'em like bacon."

This is pure hatred, and as it is directed against white cops, racist.

Obama should tell Black Lives Matter to stop the hate. But though he has shown no reluctance to lecture white America, he has rarely shown the same stern judgment with black America.

Now there is no denying that urban black communities are among the most heavily policed. Why? As Heather Mac Donald, author of "The War on Cops," writes of a city she knows well:

"These disparities mean that virtually every time that police in New York are called out after a shooting, they are being summoned  to minority neighborhoods looking for minority suspects."

As these percentages are unlikely to change, we are going to have more collisions between black males and white cops. Some will end in the shooting of black criminals and suspects and, on occasion, innocent black men. Some are going to result in the death of cops. Mistakes are going to be made, and tragedies occur, as with the shooting of 12-year-old Tamir Rice, killed in Cleveland while waving a toy pistol. (Pictured right.)

But if there is to be a social explosion every time an incident occurs, like the deaths of Trayvon Martin, shot while beating a neighborhood watch coordinator, and Michael Brown, shot in Ferguson after trying to grab a cop's gun, America is going to be permanently polarized.

And there is no doubt where the majority will come down, and who will be the near-term beneficiary.

Monday, Donald Trump declared himself "the law and order candidate," and added: "America's police ... are what separates civilization from total chaos and destruction of our country as we know it."

And Clinton? On Friday, she said, "I'm going to be talking to white people. I think we're the ones who have to start listening."

Prediction: If Black Lives Matter does not clean up its act, Obama and Clinton will have to throw this crowd over the side, or the BLM will take her down.