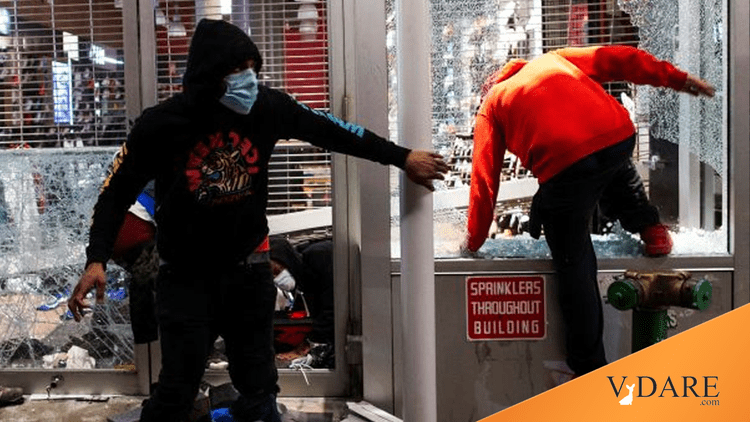 From: A Greenwich Village Reader [Email him]

The curfew was ignored last night, largely speaking. Thousands of "protesters" were all over the neighborhood, cops as well, and helicopters, and sirens—police, fire, and ambulance. There were no major problems within our line of sight and there is precious little unbroken glass left; so in comparison with what has gone before, it was a quiet night, although surely the sirens were for something.

Now every group of young black guys glower as us like they wish us dead, which of course they do. So the questions are turning toward what happens when the curfew is lifted. "Normal life" feels like it's off the table.

My speculation is that when the curfew is done, we'll get individual groups of black kids doing the racial-animus version of wilding. Five of them stroll up, demand you kneel to them, confess your white guilt, and swear your allegiance to Black Lives Matter. If you refuse, you get a beating. They'll keep the injuries light, and the blacks will avoid prosecution because … 400 years of slavery.

It’s the logical next step. My dread is that they're using this time to get more organized for the next level of Antifa revolution: restocking supplies, making more careful plans, targeting specific areas where they can inflict terror. Hopefully they are as incompetent as they look.

To my knowledge, they haven't targeted any residences yet. The brownstones here look like promising targets. If it goes that way after the curfew, we’ll need the Army.

If you listen to [mutual acquaintance], his reaction to the "kneel and repent your whiteness" video is going to cause a Greenwich Village Klan chapter to spring up. The people who haven’t been locked in at night for their own protection seem horrified and angered by this.

Here we're just defeated. They vastly outnumber us and, thanks to the Mayor, are more or less free from prosecution, so they can do what they like. We personally feel like sitting ducks whose time will come eventually.

I don't see how the city comes back. It would take another Giuliani, and those don't grow on trees here. I think for the rest of 2020 at least, we're hostages in America's war for wokeness.

John Derbyshire writes: The above was sent to me as email by a friend who lives in a Greenwich Village (i.e., lower Manhattan) apartment. It's the latest of several he's sent me describing the situation down there these few days. This one was sent early Wednesday evening. I have edited slightly to preserve anonymity.