Re: James Fulford's blog posts “Like The Roman, I Seem To See ‘The River Tiber Foaming With Much Blood’”–Enoch Powell’s Great Speech

From: A North Carolina Reader [Email him]

Enoch Powell is either crying or cackling in his grave as his old constituents' prediction comes to play.

The conflagration in Philadelphia at the Starbucks at 18th & Spruce, a very upscale area where I used to live, is evidence of who is holding the whip in Current Year America.[Protests follow outrage after two black men arrested at Philly Starbucks, by Phil McCausland, NBC, April 15, 2018]

Two black men who sat at a table while waiting for a friend, without ordering anything, were asked to leave by management after asking to use the bathroom. They refused to leave, so management called the police. They were arrested.

The most shocking thing about this story is that in 2018 there is an un-woke person in Philly who does not understand that blacks are sacred god-like idols not to be offended or angered, or expected to abide by our mortal laws. As Enoch foretold, an ordinary working man in Wolverhampton saw that the black man would one day hold the whip hand over the white man!

A week or two ago I fell into conversation with a constituent, a middle-aged, quite ordinary working man employed in one of our nationalized industries. After a sentence or two about the weather, he suddenly said: “If I had the money to go, I wouldn’t stay in this country.”

I made some deprecatory reply, to the effect that even this Government wouldn’t last for ever; but he took no notice, and continued: “I have three children, all of them have been through grammar school and two of them married now, with family. I shan’t be satisfied till I have seen them settled overseas. In this country in fifteen or twenty years’ time the black man will have the whip hand over the white man.” 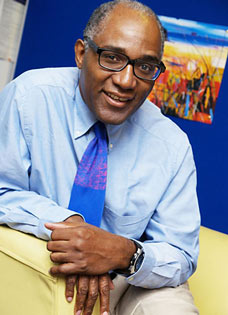 Trevor Phillips (right) head of the “Equalities and Human Rights Commission,”  speaking in the same room in 2008:

Addressing representatives from local authorities, police, and a range of equality groups present at the MacDonald Burlington Hotel, Birmingham, Mr Phillips said he thought Mr Powell's dire predictions had not been fulfilled.

Well, Powell's "dire predictions" about the Race Relations Act had come true, in the person of Mr. Phillips himself, a man who could put people in jail or otherwise ruin their lives for saying the wrong thing.