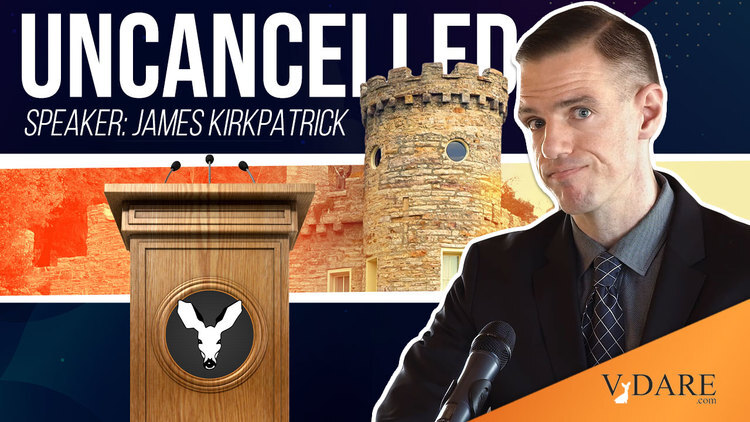 A Reader Has Congratulations About The Castle, Questions About Immigrant Intelligence

From: Steve C. in Chicago [Email him]

Greetings from Chicago. I just listened to Peter Brimelow’s interview with Pete Quinones [Episode 746: Immigration and the ’Great Replacement’ w/ Peter Brimelow, June 2, 2022]. I wish he had raised the issue of immigrant intelligence, which makes them malleable to the extreme liberal suggestions from ruling class whites. The largest number of refugees in 2019 was from the Congo, with a median IQ of 78.

In this country, we have determined someone has an intellectual disability when the IQ is less than 70. Central American immigrants are not much better. The average IQ in Guatemala is 79; 80 in El Salvador, 81 in Honduras and Nicaragua. Guatemala has the lowest literacy rate in Central America with an average IQ 10 percent below that of Mexico. White Americans as you know have a median IQ of at least 100 and some studies show a little higher. IQ levels are correlated with economic activity, crime rates, and employment readiness. When IQ levels in communities decline, they become dysfunctional and ungovernable.

I hope to visit your castle sometime. It is really cool our people have a place where we can call our own and share ideas and experiences. Please post more audio from the conference at the castle. I just downloaded the talk from James Kirkpatrick. I would like to hear all the talks.

James Fulford writes: We do discuss immigrant IQ on a regular basis. When Jason Richwine was fired from Heritage for having done research on immigrant IQ in college, Peter Brimelow wrote:

The facts about the differing average IQ levels of the various post-1965 immigrant streams have been settled science for many years. The original draft of my huge 1992 National Review cover story Time to Rethink Immigration, which eventually resulted in my 1995 book Alien Nation: Common Sense About America’s Immigration Disaster, contained a discussion of IQ and immigration policy, alluding to Richard J. Herrnstein’s and Charles Murray’s book The Bell Curve, which I knew was in preparation. The reaction of my dear friend John O’Sullivan, NR’s Editor in those happy days, was very instructive. Not only did he insist on cutting out the discussion, but he also hunted down every copy of the original draft in NR’s office and had them destroyed. His argument was that any mention of IQ or heredity at all would result in the issue monopolizing all response to my article, plunging the rest of my very broad case against contemporary immigration policy irretrievably into the dark.

When we talk about ”differing average IQ levels of the various post-1965 immigrant streams” we mean that there are both immigrants from the Congo who have lower average IQ than Americans, but immigrants from China, et cetera, who have higher IQs. These aren’t necessarily a benefit to America, they just displace a better class of American.