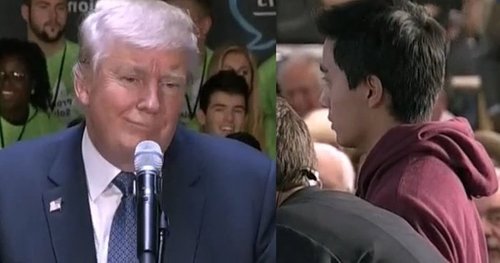 From: An American Defense Worker [Email him]

Donald Trump is really on to something with his understanding of the National Question.  Recently, Donald Trump had an interesting exchange which shows just how ahead in thinking The Donald is about America's problems than other politicians, especially cuckservatives like Jeb Bush.  One of American's longest-running problems is the situation on the Korean Peninsula.  I served in the military in Korea, my father served in the military in Korea, and my father's uncle served in the US Army during the actual Korean War.

The Korean in the video is Joseph Choe, a student at Harvard.  I've transcribed the important part of the exchange and it is below:

You can watch the exchange here:

Joseph Choe:  "Basically, you said that South Korea takes advantage of the United States in terms of defense spending on the peninsula.  I just want to get the facts straight..."

Donald Trump: "Are you from South Korea?"

Joseph Choe: "I'm not, I was born in Texas, raised in Colorado."

Laughter (To explain why, Joseph Choe is obviously South Korean and his remark about "born in Texas, raised in Colorado" is a self-evident half-truth.  Donald Trump makes a face.) [VDARE.com note: The fact that Trump even asked this is apparently shocking to the media.]

Joseph Choe: "I just want to say, no matter where I'm from I just want to get my facts straight and I want to tell you that's not true, South Korea paid $861 million dollars..."

Donald Trump then cuts off Choe by stating that South Korea's financial support is "peanuts" and he further discusses South Korea's large industrial base, and America's defense policy regarding wealthy allies.

It is highly suspicious to this author that America developed a "rust-belt" just as South Korea took off as a manufacturing power.  There is more than just American security policy favoring South Korea over the American Mid-West, there are also "free trade agreements" that are crafted by lobbyists and interest groups-many of whom are funded by foreign governments.There is also currency manipulation which makes the price of imported goods form Asia artificially cheap compared to American made products.

There is more to this story.  Joseph Choe is also in another YouTube where he asks  Japanese Prime Minister Abe about the long-running anger that Koreans have towards the Japanese Military's sex-slave policies 70 years ago during the Second World War.

I've transcribed the important part of the exchange below:

You can watch the exchange below. (Notice how he is wearing the same hoodie!)

Joseph Choe: "...this has to do with a topic which weighs heavily on my heart.  As someone with ties to South Korea I know that the issue of comfort women has been a source of contention between my country and yours..."

The situation regarding comfort women more than two thirds of a century ago in the Far East is beyond the scope of this letter however, Joseph Choe's two questions say much about America's National Question.

Notice that  in the first video Choe is disingenuous in not admitting to Donald Trump he is a South Korean who wishes to influence American policy into helping out his own kind regardless of its costs to the American People.

In the second video notice Choe's carefully chosen words, the topic which "weighs heavily" on his heart is a situation in which no American was a part of then-or has a stake in now.  Additionally, the source of contention is between "My country" [i.e. South Korea] and Japan.  Let's explore that theme again—when Choe says "my country" he doesn't mean the country which Texas and Colorado is a part of.

Donald Trump is right about the 14th Amendment and birthright citizenship.  To put it frankly, Choe is a Fifth Columnist in America.  Blood is thicker than birth certificate paperwork.