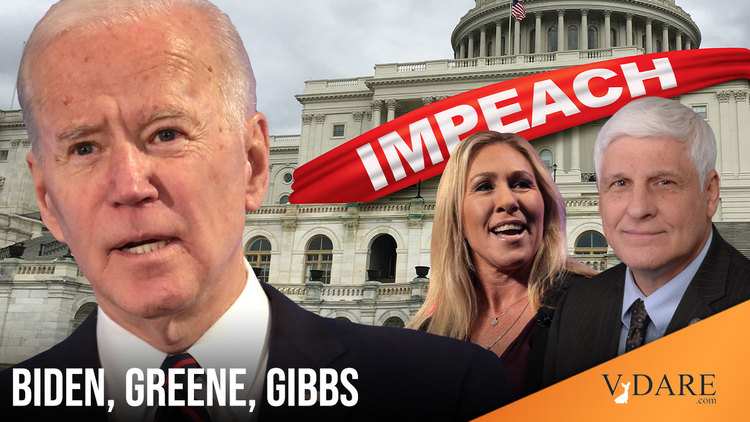 A Biden Impeachment Bill That Republicans Can Run On

VDARE.com noticed a number of Republicans who are warming up to impeachment last week. As President Biden’s lawless immigration policy becomes more apparent, more Republicans will realize this is the best way to solve the border crisis.

And the good news is that there are already articles of impeachment drawn up. One version was drawn up by Georgia Rep. Marjorie Taylor Greene. Another was crafted by Ohio Rep. Bob Gibbs. The Gibbs’s bill, unlike Greene’s articles of impeachment, has cosponsors. They are Arizona Rep. Andy Biggs and Texas Reps. Brian Babin and Randy Weber [House Republicans file impeachment articles against Biden, by Mark Moore and Juliegrace Brufke, New York Post, September 22, 2021].

The bill makes its first article of Impeachment on immigration. It declares:

The other two articles deal with Biden’s eviction moratorium and Afghanistan withdrawal.

Both Greene and Gibbs’s resolutions offer Republicans a plan for what to do if they take back Congress.  Republicans must make Biden pay for his failure to protect our border and enforce basic immigration law. No president should feel empowered to break his most basic duty to safeguard the homeland against foreign invasion.