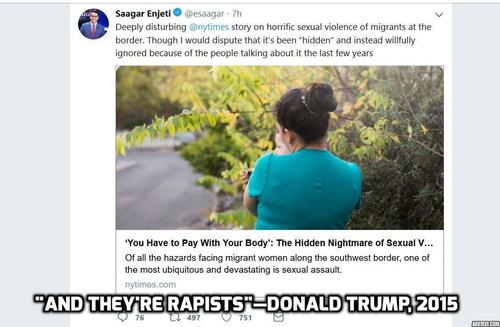 "And They're Rapists"—NYT Finally Catches Up With Trump, Ann Coulter, And VDARE.com On Mexican Border Rapes

A note on this latest NYT story from Saagar Enjeti of the Daily Caller:

Deeply disturbing @nytimes story on horrific sexual violence of migrants at the border. Though I would dispute that it’s been “hidden” and instead willfully ignored because of the people talking about it the last few years https://t.co/FrZ2Il5bds

You may remember that in announcing for President, Donald Trump added the words "and they're rapists" to the end of his list of things wrong with illegal immigration. (He'd read Adios, America, including Chapter 11.)This is perfectly true—Mexico has a horrific rape culture, especially among the illegal immigrant class, one way in which Mexico is not sending its best.

And when a candidate for President called out Mexican rape culture in 2015, that might have been a good time for the national news media to "have a conversation" about Mexican rapes, because I assure you it's old news here at VDARE.com.

See  The Rape Tree, from Nicholas Stix in 2010, in which the habit of Mexican border smugglers treating rape as the "price of admission" to the US is covered, and How rapists prey on vulnerable border crossers,The Washington Times, November 21, 2005, which quotes Minuteman Tim Donnelly as saying that they could hear the screams of rape victims in the border crossing areas, a story also recounted here.

Enjeti points out that this coverage didn't happen until after a speech on the subject by Trump himself, now in the Oval Office, despite the best efforts of The New York Times, Hillary Clinton, and the FBI.

If you read the NYT story [ ‘You Have to Pay With Your Body’: The Hidden Nightmare of Sexual Violence on the Border, by Manny Fernandez, March 3, 2019] you'll note that it talks about the Mexican and Honduran migrants who are raped. They're raped by "smugglers" who don't seem to have a nationality. They also say that some of these rapes  take place inside the United States, also apparently by men of no nationality or ethnicity. The rule is that in immigrant-on-immigrant crime, only the victim is called an immigrant.

One more thing—in a burst of "whataboutism", the NYT says

At least five of the women who were assaulted—in one case, bound with duct tape, raped and stabbed—were attacked not by migrant smugglers, who are often the perpetrators, but by on-duty Border Patrol agents and Customs officers.

Well, those Border Patrol attackers are of a particular nationality (you have to be an American citizen) but are they of any particular ethnicity? Well, the linked article (by the same author, Manny Fernandez) gives the names of the accused: Esteban Manzanares, Ronald Anthony Burgos Aviles, and Juan David Ortiz.

Well, that's not an example of American rape culture, is it?

not reporting raceMinority Occupation GovernmentDiversity Is Strength
<< Previous
Next >>
LATEST