Contrary to popular opinion, support for free speech is rising, & is higher among liberals & college grads. (I'm not surprised: In EN I show the world is getting more liberal, & most of us underestimate the liberalism of everyone else.) https://t.co/NBU0foBIXM via @voxdotcom

The article Pinker links to is by a square-jawed writer who took data from an academic who probably got the idea from (covertly) reading Steve Sailer, as so many of the intelligentsia do. It covers the same GSS free speech module previous posts have been based on here. There is no mention of demographic differences in support for free speech beyond the strong relationship between support for it and general intelligence.

The data Yglesias presents is not inaccurate. Expressed support for the right of homosexuals and atheists to speak publicly has steadily increased over the last several decades. People in the West no longer care if gays bugger, proselytize, marry, etc. Christianity, long since put out to pasture in Europe, is cratering in the US. After the Cold War ended, support for allowing communists and militarists to speak began to markedly increase as well. Collapsed and discredited. What's the harm?

These four categories (homosexuals, atheists,  Communists and militarists) don't deal with biological differences between individuals and populations, though. Identity is the most important issue of the 21st century, and only the question about "racists" addresses it.

The definition of "racist" has expanded enormously over the last couple of generations to encompass just about everyone to the right of, to take a random example, Steven Pinker. It now putatively includes the half of the population—and the majority of white Americans—who voted for Donald Trump. Pinker and Yglesias both know damned well that cultural elites and non-whites are increasingly applying the "racist" label to everyone who put the president in office.

Indeed, a recent poll found that a majority of people in the US think president Trump is a racist. Combine that with the graph below, and we're looking at well north of 100 million people in the US believing that the president should not be allowed to speak!

We see why they hit us with bike locks in the city that birthed the free speech movement, I guess. Deplorables must be silenced.

Support for the free speech of "racists" is most assuredly not rising. To the contrary, it is falling. And yes, it's falling among liberals. The following graph shows the percentages of people, by decade of birth and political orientation, who say racists should be permitted to speak in public (N = 32,858): 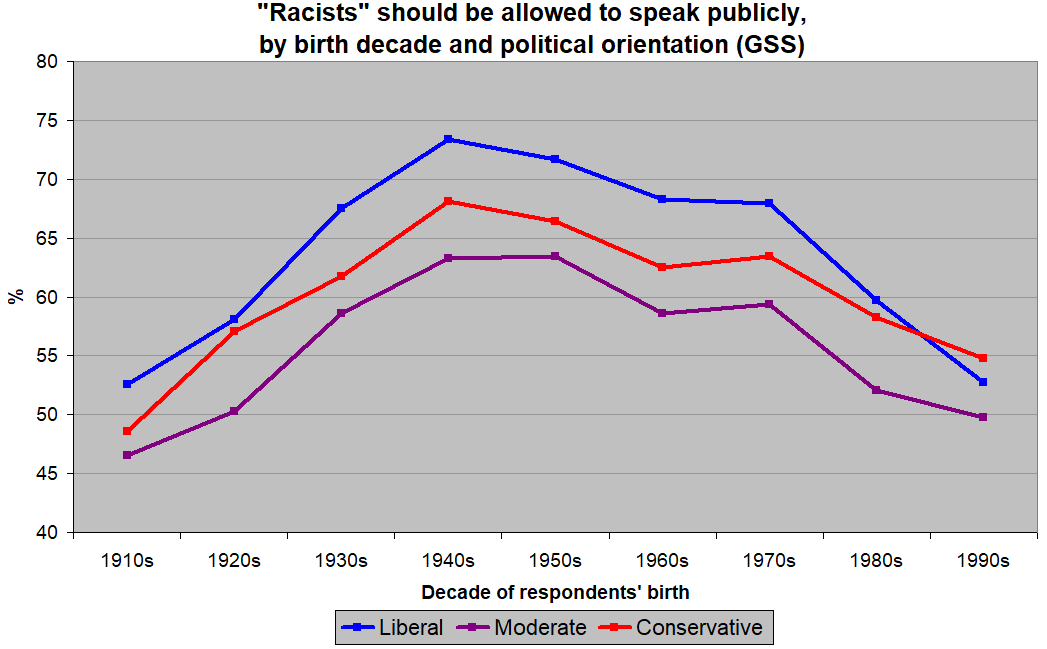 The right to openly talk about controversial or contentious subjects is a boomer ideal, one on track to die with them. It was born of a confident, victorious people during an era of nearly no immigration. The disunited polyglot of squabbling tribes now camped out from sea to shining sea have no use for it. Contrary to Pinker's opinion, its  future is bleak.