Anatoly Karlin assumes the herculean task of quantifying the JQ (Z-Man recently did the same). The first thing Karlin tackles is whether or not Jews tend to be "more loyal to Israel than [this country/to the countries they live in]".

From nearly its inception through the mid-nineties, the GSS asked respondents how much they like or dislike various countries. The following graph shows percentages who gave the country in question the highest "like" rating possible.

In the case of the evaluation of Israel, the response pool is restricted to those who religiously identify as Jewish. For all other countries, the response pools are restricted to those who ethnically identify with each of the countries under consideration. That is, bar for Israel shows what percentage of Jewish respondents really like Israel, the bar for China shows what percentage of ethnically Chinese respondents really like China, etc (N = 1,888): 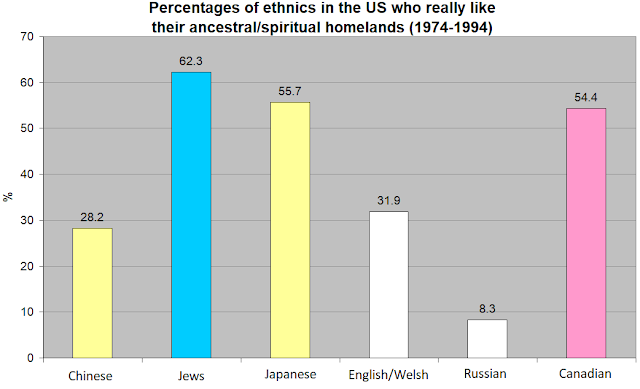 Most of this data was collected during the Cold War so the negative sentiments towards China and especially Russia are not particularly surprising (and, I guess, modestly reassuring—or at least providing of some excuse for boomer civic nationalism during its heyday).