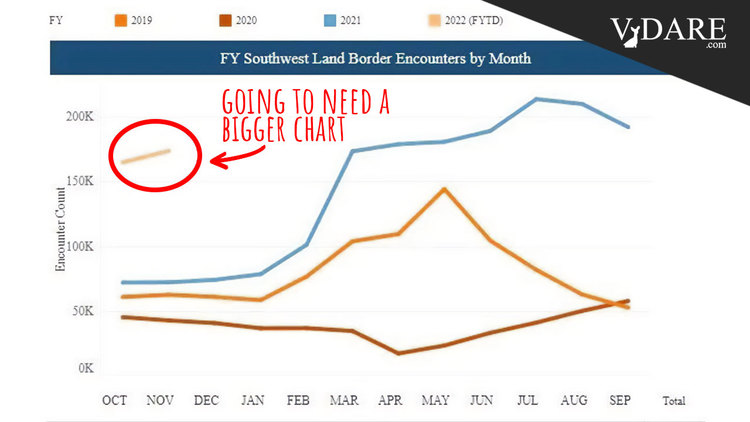 CBP's numbers are in for the month of November. From a Washington Examiner article, "November's numbers are multiple times historical norms."

In the chart below, the numbers for this November are at the left side of the chart, because they're in the 2022 fiscal year. They are far above the charts for the previous Novembers. 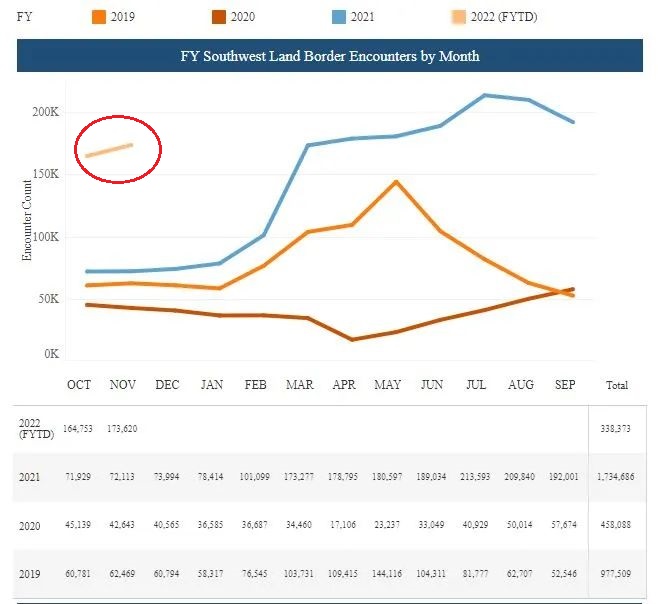 The article goes on to say that half of the 173,620 encountered were returned to Mexico under Title 42. Title 42 was the Trump administration's program that sent Mexicans back to Mexico immediately due to health concerns. Most of these will be solo Mexican males not trying for political asylum [Authorities encountered 173,620 people illegally crossing border in November, up 5%, by Anna Giaritelli, December 17, 2021].

The problem, according to those who are still working, is that the illegal aliens just go back to Mexico and try again and again and again until they get through. When I was first on the job, an unofficial rule was that after an illegal alien was caught the fifth time, then they would get prosecuted formally rather than just administratively. This meant that they would actually go to jail before being formally deported. Once officially deported, if they re-entered the United States within five years, then they could do actual prison time. Their sentences may not have been all that long, but it did serve to cut down on recidivists.

My friends still on the job tell me that the aliens just keep trying till they get through. As the following article from Townhall shows, most Border Patrol Agents are on diaper duty. So no one is actually out in the field trying to arrest the illegal crossers [Border Patrol Documents Reveal Few Agents Patrolling Yuma Sector During Historic Crisis: EXCLUSIVE, by Julio Rosas, December 15, 2021].

I should add that Yuma has many more zones than just 8 and 9, so there will be long stretches of border with no Agents patrolling there at all.

While  CIS reports that Joe Biden is secretly sending some illegal aliens back with Deportation Officers in plain clothes ,as if to hide what they are doing; on the other hand, he's flying others back to the United States [Joe Biden Flying Illegal Aliens, Deported by Trump, Back to U.S, by John Binder, December 15, 2021].

Granted, in terms of numbers, as a percentage of crossers, there are very few being flown out and fewer still being flown back in. However, it is very confusing not just for the Agents on the job, but especially for the illegal aliens. Many of these aliens believe that Biden is having an amnesty.

The Biden administration is continuing to fight against Trump's Migrant Protection Program (MPP), the Orwellian-titled program that had asylum seekers waiting in Mexico till they had their court hearings. According to Border Patrol union official Brandon Judd on the most recent episode of Parsing Immigration Policy over at the Center for Immigration Studies, the Biden administration is slow-rolling out the program. They are trying to find excuses not to enroll illegal aliens in it.

When I was involved in MPP, the Mexican authorities refused to take back anyone who could not speak Spanish or was unhealthy. Since we estimated that 70% of those aliens had some sort of ailment (usually an upper respiratory infection), a large number of the asylum seekers were released into the United States rather than being sent back. The aliens from Central America who were aborigines were encouraged by liberal activists to pretend not to speak Spanish so that they could be released. Yes, liberal activists of the Pueblo Sin Fronteras (People without Borders) were encountering the aliens at migrant camps in Mexico and coaching them on ways to keep from being sent back. At first, Mexican authorities were taking back pregnant women, but it didn't take them long to reclassify them as unhealthy. You see, Mexico has a form of birthright citizenship, and they don't want Guatemalans gaining that “valuable” status.

The United Nations was in on this scam too [VIDEO: Trashed UN Pamphlets Found In Mexico Tell Illegal Immigrants How To Get Refugee Status In America, by Tom Pappert, NationalFile.com, December 15, 2021].

Finally, Governor DeSantis is trying to find ways of going after the Non Governmental Organizations (NGOs) who profit off of sending illegal aliens to Florida. "The federal government pays $500-$1400 per bed, per day to operators who take unaccompanied minors." Florida usually pays $158 per child for its own kids [DeSantis Freezes Licenses for Florida Daycare Facilities Paid by the Biden Admin to House Illegal Immigrants, by Jeff Reynolds, PJMedia, December 15, 2021].