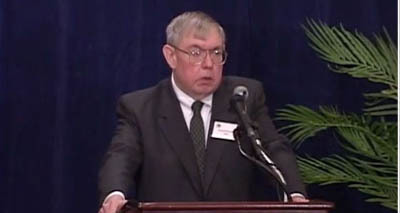 This is one of my favorite stories about politics:

By Peter Brimelow Contra Costa Times Published Saturday, December 4, 1999"IN AMERICA, WE have a two-party system," a Republican congressional staffer is supposed to have told a visiting group of Russian legislators some years ago.

He added: "Periodically, the two parties get together and do something that is both stupid and evil. This is called - "bipartisanship."

Our current mass immigration policy is a classic example of this fatal Washington bipartisanship. It is a stupid policy because there is absolutely no reason for it - in particular, Americans as a whole are no better off economically because of mass immigration.

It's true on other issues as well: if you live in Europe, or Canada there is no party you can vote for that can reinstate the death penalty, or abolish gun control.

I mention it because we frequently link to that story, or reuse that anecdote, and it came up in William Rusher column on August 9th. [townhall.com—The immigration counterattack begins]

When the American people rose up in wrath a couple of months ago and stopped dead in its tracks a bipartisan effort to ram a phony immigration "reform" bill through the Senate, I warned that our triumph was inspiring but very probably short-lived. It is extremely difficult to focus the attention of the people at large on any policy, however bad, that is wanted eagerly by an influential minority.The policy in question — namely, to legalize the status of the 10 or 15 million illegal aliens in this country, keep them working here for peanuts, put them on track for citizenship and open the doors to millions more (all in the name of "reform") — has the support of not one, but two powerful minorities: professional Democratic politicians, who calculate that the great majority of them will vote Democrat if they ever become citizens, and greedy businessmen (mostly Republican), who want their cheap labor no matter what the social consequences for the country.

My fellow columnist M. Stanton Evans is responsible for the brilliant perception that the Republicans (in John Stuart Mill's formulation, transposed from Britain) are "the stupid party" and the Democrats are "the evil party." Every once in a while they get together and hatch some policy that is both stupid and evil. This is called "bipartisanship," and the immigration reform bill was a spectacular example of it.

Meanwhile, Rusher has a warning about the Bipartisan Betrayal—it's coming back!

But, as I say, our victory almost certainly won't last. Having lost the battle for the moment, the proponents of what amounts to "open borders" are already preparing to win the war a little bit at a time. We will be offered small sips from the fatal cup, at first so minor and seemingly innocent that we will be tempted to let down our guard. But gradually, over a period of years, the whole draught will be imbibed.