California: Governor Brown’s Infrastructure Failure Will Be His Legacy

The recent drama at the Oroville Dam was a genuine horror show for us Californians who have been conserving water by the cupful for years. Huge amounts of water were released and flushed into the sea to keep the dam from failing and killing thousands. At least 188,000 people downstream were forced to evacuate.

Someday Californians will wish we had that water.

Governor Jerry Brown — a self-proclaimed environmentalist — has nevertheless encouraged diverse immigration and unlimited population growth, despite the state’s history of periodic and severe drought. In 2014, he declared to Mexico (population 125 million) “You’re all welcome in California.”

And the numbers make California priorities clear: state taxpayers are forced to pay over $25 billion annually for services going to illegal aliens and their dependents, according to a 2014 study from FAIR.

Meanwhile, vital infrastructure has been left to rot. Officials were warned a dozen years ago that the Oroville dam could fail because of its weak spillway design, but nothing was done.

Below, the Oroville Dam, under pressure from a full reservoir, released vast amounts of water over days in mid-February to prevent a catastrophic collapse. 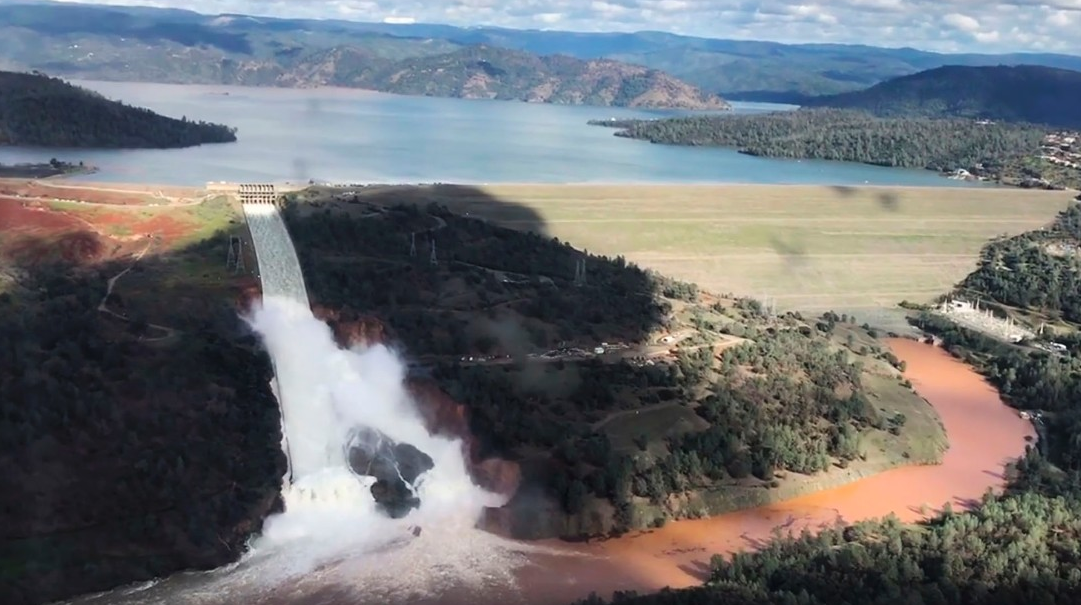 Tuesday’s Sacramento Bee gave front-page coverage to the damage to the spillway structure. 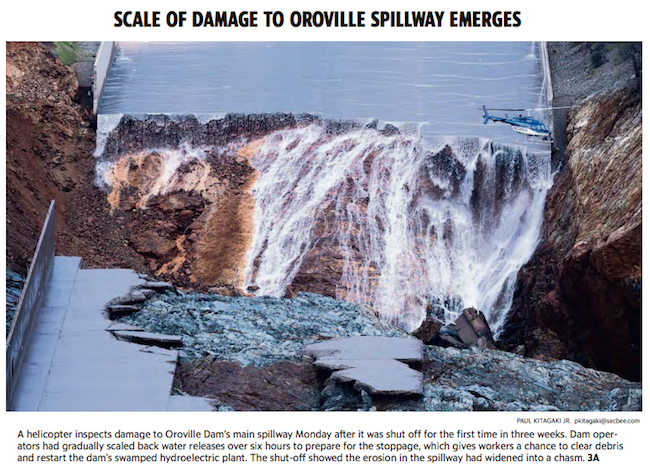 Jerry Brown is nearing the end of his governorship, and his legacy is reflected in the Oroville near-disaster. Los Angeles radio guys John and Ken read parts of Joel Kotkin’s critical article on Monday (LISTEN: The True Legacy of Jerry Brown). The governor is very lucky that there wasnt a massive loss of life caused by his inattention to California infrastructure.

The cracks in the 50-year-old Oroville Dam, and the massive spillage and massive evacuations that followed, shed light on the true legacy of Jerry Brown. The governor, most recently in Newsweek, has cast himself as both the Subcomandante Zero of the anti-Trump resistance and savior of the planet. But when Brown finally departs Sacramento next year, he will be leaving behind a state that is in danger of falling apart both physically and socially.

Jerry Brown’s California suffers the nation’s highest housing prices, largest percentage of people in or near poverty of any state and an exodus of middle-income, middle-aged people. Job growth is increasingly concentrated in low-wage sectors. By contrast, Brown’s father, Pat, notes his biographer, Ethan Rarick, helped make the 20th century “The California Century,” with our state providing “the template of American life.” There was then an “American Dream” across the nation, but here we called it the “California Dream.” His son is driving a stake through the heart of that very California Dream.

CALIFORNIA CRUMBLING
Nothing so illustrates the gap between the two Browns than infrastructure spending. Oroville Dam’s delayed maintenance, coupled with a lack of major new water storage facilities to serve a growing population, reflects a pattern of neglect. Just this year alone, the massive water losses at Oroville Dam and other storage overflows have almost certainly offset a significant portion of the hard-won drought water savings achieved by our state’s cities. A sensible state policy would have stored more water from before the drought, and would now be maximizing the current bounty.

Once a national and global leader in infrastructure, according to a report last year by the Center for Budget and Policy Priorities, California now spends the least percentage of its state budget on infrastructure of any state. In the critical Sacramento-San Francisco Delta, an ancient levee and dike system is decaying, and ever more stringent environmental regulations limit key state and federal water facility operations. To be sure, Brown has supported a “water fix” — a dual tunnel through the Delta — to address some of these problems, but his efforts have only produced a mountain of paper, rather than real-world improvements. In terms of preparing for the future, California’s current penchant for endless studies and environmental hand-wringing is fostering pre-Katrina Louisiana conditions, rather than the forward-looking capital investments previously the state’s hallmark.

Remarkably, this year’s water system fiasco could have been prevented if Brown had actually heeded his own climate change rhetoric, which anticipates that more rain and less snow will fall in the state. But his climate change obsession failed to spark any rush to modernize or expand water storage to capture the potentially increased rainfall. There has not been a major new dam or reservoir constructed since the first “Moonbeam” era — in large part, due to environmental opposition and Sacramento’s disinterest in basic state services.

You don’t have to be a hard-core climate activist to see the need to expand our storage capacity. Contrary to the prevailing media narrative, droughts and floods have been repeated throughout our history. Back in 1861, it rained for 54 days, flooding much of state and creating lakes in the Central Valley. Yet, Brown, and his immediate predecessors, have not chosen not to invest in this critical infrastructure, leaving us with an aging set of water resources that date, like the Oroville Dam, from the 1960s or earlier.

Nor is the water infrastructure alone in terms of neglect. California’s roads are among the worst maintained in the country. The Los Angeles area has the worst road conditions of all major metropolitan areas, followed closely by the Bay Area. But fixing roads is hardly a Brown priority, given that the state wants to put us all on a “road diet.” Instead, we are faced with the mounting costs for a high-speed choo choo that Brown wants to leave us as his legacy, but solves none of California’s basic transportation problems. Despite paying billions in gas taxes and other levies that are supposed to maintain roads, Californians, as the San Francisco Chronicle recently suggested, will be required to pay new, more regressive taxes if they want fewer potholes and sound bridges.

THE WAGES OF NARCISSISM — AND OPPORTUNISM
Brown’s recent pronunciamentos suggest we will have ever more extreme climate policies, including virtual bans on all greenfield housing, and regulations covering everything from how houses are built to cow farts. Sadly, all this will have no real effect on the global climate, given California’s relatively small footprint; the shift of people, jobs and productive industries to other, less temperate states like Texas all but wipes out whatever might be gained from the state’s increasingly extreme greenhouse gas limitations.

Brown’s actions seem rooted in a desire to present himself as the savior of the planet. Yet, while he postures, Brown is leaving a legacy not of salvation, but rather of devastation — at least for everyone but a handful of tech oligarchs and the state’s pensioners. His successors must cope with voter ire over such mundane things as ever more crowded roads, a perennial shortage of secure water supplies and cascading prices for everything from electricity to housing. These realities, not the praise heaped on Brown from the media, will constitute the essence of his legacy.