Gavin Newsom is the sort of serial politician that many citizens wish would give it a rest, because he was mayor of San Francisco for eight years and since 2010 has occupied the post of California lieutenant governor. Playing second banana to Governor Jerry Brown has been a rather low-visibility gig, so he may be looking for a hot new issue to make him seem fresh to voters in his effort to move on up. Newsom has glommed on to the threat to jobs from automation as a campaign topic, although his knowledge of the issue seems sketchy at best. He admitted in an interview with The Guardian (linked below) that he is “part of the problem” by using an automated grape sorter in one of his Napa vineyards.

Mayor Newsom certainly didn’t seemed concerned with American job loss when the cause was illegal immigration — in fact, he actively promoted it. In 2008, he spent $83,000 for an ad campaign to inform illegal alien job thieves that they would have safe access to city services in San Francisco and would not be arrested by the SFPD for any crime this side of murder. Of course, advertising a generous sanctuary policy functions as a magnet to unlawful foreigners who come to rip off jobs that belong to citizens according to law. 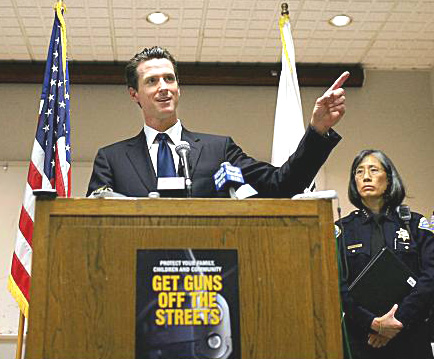 The automation threat to employment needs to be discussed by the political class, which isn’t happening in Washington. Newsom is not the brightest light in the liberal galaxy, but his gubernatorial candidacy and issues will get media coverage just because it’s California. Also, the idea of a universal basic income as proposed by some techies is a better fit for Democrats, since dispensing free stuff is what they like to do.

Republicans just seem flummoxed about how to cope with automation generally and avoid it if they have a clue. Hint: ending immigration as an obsolete government policy for the jobless automated future would be a good place to start.

Gavin Newsom has been waiting in the wings for years as lieutenant governor. Now his campaign to lead the state is taking on its golden industry: tech

The graduating computer science students at the University of California at Berkeley had just finished chuckling at a joke about fleets of “Google buses, Facebook shuttles and Uber-copters” lining up to whisk them them to elite jobs in Silicon Valley. The commencement ceremony for a cohort of students who, one professor confided, were worth around $25bn was a feel-good affair.

Until, that is, Gavin Newsom took to the lectern and burst the bubble.

The smooth-talking Democrat, and frontrunner to win California’s gubernatorial race next year, warned the students that the “plumbing of the world is radically changing”. The tech industry that would make them rich, Newsom declared, was also rendering millions of other people’s jobs obsolete and fueling enormous disparities in wealth. “Your job is to exercise your moral authority,” he said. “It is to do the kinds of things in life that can’t be downloaded.”

That is not the kind of message computer engineers tend to hear. But Newsom, who has been waiting in the wings as California’s lieutenant governor for the past seven years, has put the consequences of automation and the center of his campaign.

“This is code red, a firehose, a tsunami that’s coming our way,” he told the Guardian a few days after his commencement address at Berkeley. “We’re going to get rolled over unless we get ahead of this.” California, a crucible of technological transformation that is reshaping the world, could be on the cusp of the first major election to be dominated by a debate over what to do about robots.

It is a conversation that already feels overdue. San Francisco, the city where Newsom, 49, came to prominence as a two-term mayor, is a petri dish for technological advances and their social consequences. The novelty of seeing driverless cars on the roads wore off months ago, while delivery robots recently began patrolling the sidewalks.

San Francisco office workers can now grab lunch at a branch of Eatsa, a restaurant that boasts no waiters or cashiers, followed by a quick artisanal espresso at Cafe X, a coffee shop composed of a single robotic arm. Newsom has been concerned about the numerous startups seeking to disrupt the fast-food industry.

He frequently complains about Momentum Machines, a secretive San Francisco startup promising to transform the fast-food industry with robotic technology. The ambition, according to the company’s founder, is to “completely obviate” human workers.

“There’s an empathy gap,” Newsom said. “I really feel intensely that the tech community needs to begin not just to solve these business problems but to begin to solve societal problems with the same kind of disruptive energy that they put behind developing the latest app.”But Newsom’s critics question whether he’s the politician to take on the tech industry. Caricatured by opponents as a business-friendly “Davos Democrat”, Newsom has a long record of support for gig-economy companies such as Uber and Lyft. One of his biggest sources of donations is Airbnb employees.

Newsom does not dispute that he has deep political connections in Silicon Valley, and refers to both Elon Musk and Mark Zuckeberg as friends. “I’ve grown up in and around this world. I could tell you 10 founders who I did their weddings, quite literally married them. Very, very close; a number of them are godparents to my kids.”

Newsom argues his close relationship with the titans of technology, and his dependence on their donations, makes him better placed than his rivals to challenge the industry. “I am probably the one person that can have that conversation,” he said. “Because I have the relationship.”

He says that while he respects technology, “I’m starting to appreciate the downsides more and more”. But in his own business, a conglomerate of restaurants, bars, hotels and wineries, Newsom said he is increasingly aware of the upsides of labor-saving technology.

His interview with the Guardian took place in Balboa Cafe, a Newsom-owned restaurant in the Marina district. One of his waitresses was within earshot when he remarked: “I think we’ll have some bartenders for a while, although I know for a fact they have robotic bar tending technology.”

One of his Napa vineyards, he added, recently started using a $50,000 German-made machine that utilizes sophisticated optical scanning technology to pick and sort grapes. He conceded that the machine was replacing human grape-pickers, who might not be able to find work elsewhere. “It’s their lives,” he said. “And that’s my point. I’m part of the problem.”

‘I don’t have the damn answer’ Precisely what to do about that problem is the issue that is vexing all politicians. For all the effort he has put into asking questions about automation, Newsom, by his own admission, is coming up short on answers.

He is “not opposed” to universal basic income, an idea popular among Silicon Valley utopians that would see all citizens receive some kind of regular and unconditional payment, and is interested in a proposal from Bill Gates to tax companies when they replace humans with robots.

But Newsom said he was not ready to endorse either policy. Adopting politician-speak, he said his team was “starting to lean in to create the tenor of a policy approach” that will involve rethinking the education system and massive investment in apprenticeships.

Then he reverted to a more frank response. “I’m struggling to figure it out,” he said. “So I don’t have the damn answer.”

‘Temporary insanity’ Having spent seven years in the largely powerless role of lieutenant governor, in the shadow of his boss, Jerry Brown, Newsom is acutely aware that the first step to getting anything done will be winning what is expected to be a crowded and competitive race.

Guilfoyle has made no secret of her wish to replace the beleaguered Sean Spicer, who beat her to the job back in January. Newsom shook his head at the thought of his ex-wife becoming the chief spokesperson for the Trump administration.

“Didn’t they just say it is not happening?” he said. “You think it could happen?”

The answer to that depends on who you ask. One recent report said Trump was “furious” at Guilfoyle for undermining Spicer, but the article appeared to be based on unnamed White House sources loyal to the press secretary.

Yet Trump is known to be an admirer of the telegenic TV personality. According to Guilfoyle, Trump phoned her on the morning he pulled out of the Paris climate accord, arguably the most momentous action of his presidency, to consult her on his decision.

Newsom said that while Guilfoyle’s transition from a one-time assistant district attorney of San Francisco to Trump’s translator-in-chief would make for a “fascinating” story, it would not distract him from challenging the Republican administration if elected governor.

“I know why you guys are writing about it. It’s totally fair game,” he said. “From San Francisco to Trump – it’s a good story.”

Yet it is not an especially good association for a Democrat in liberal California, and Newsom could find himself haunted by an embarrassing photograph of the couple in a posed embrace on the floor of a mansion. The image appeared in a 2004 issue of Harper’s Bazaar magazine, which declared the couple “The New Kennedys” (four months before they filed for divorce).

Newsom insisted “on my mother’s grave” that the picture had not been planned. It occurred after he was asked to sit down by the photographer, after which, he said, Guilfoyle arrived and “did the rest”.

“When that came out I was like: ‘fair game, on me, mental errors’,” he said. “Anything that could be said about that which mocks me is legit. I have no defense. You won’t see that again. Mea culpa. Temporary insanity. What can I say?”