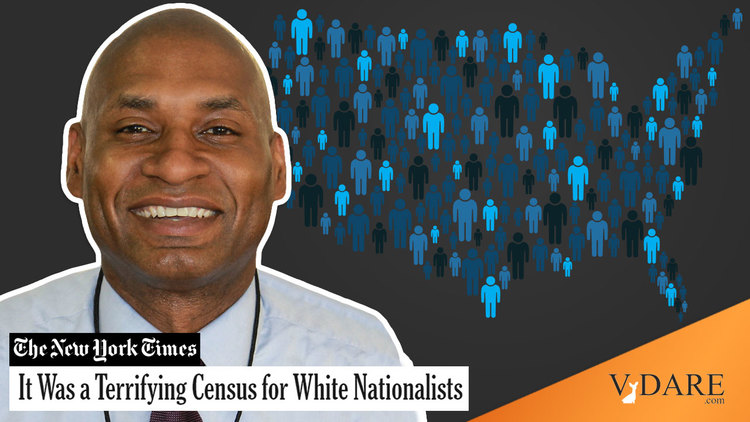 Charles Blow In The NYT: You Know That Crazy White Replacement Theory? Well, It's Happening, But, Luckily Whites Deserve It

Earlier, by Steve Sailer: Charles Blow In The NYT: "Rage Is The Only Language I Have Left"

It Was a Terrifying Census for White Nationalists

For some of us, the census data released on Thursday was fascinating. For others, it was, I would presume, downright frightening.

Much of what we have seen in recent years — the rise of Donald Trump, xenophobia and racist efforts to enshrine or at least extend white power by packing the courts and suppressing minority votes — has been rooted in a fear of political, cultural and economic displacement.

The white power acolytes saw this train approaching from a distance — the browning of America, the shrinking of the white population and the explosion of the nonwhite — and they did everything they could to head it off.

They tried to clamp down on immigration, both unlawful and lawful. They waged a propaganda war against abortion, and they lobbied for “traditional family values” in the hopes of persuading more white women to have more babies. They orchestrated a system of mass incarceration that siphoned millions of young, marriage-age men, disproportionately Black and Hispanic, out of the free population.

On every level, in every way, these forces, whether wittingly or not, worked to prevent the nonwhite population from growing. And yet it did.

… Meanwhile, the white population, in absolute numbers, declined for the first time in the history of the country. …