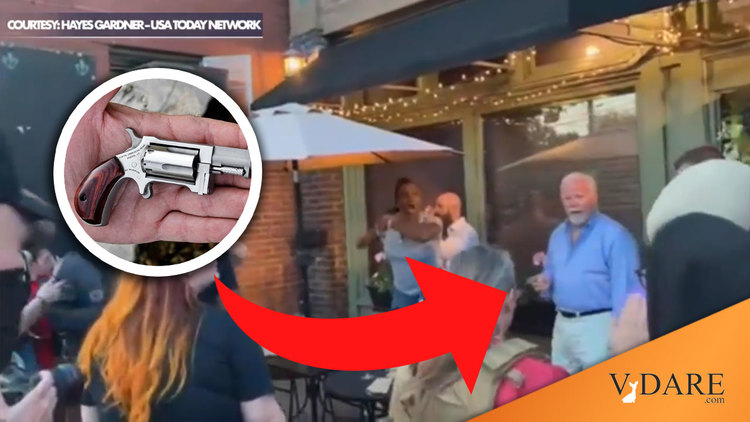 During Kentucky Derby Weekend, Black Lives Matter Protesters Swarm Diner In Louisville And Near Fatal Altercation Breaks Out Between Patrons And BLM Terrorists Inevitably, we move to the moment of no return.

Images showed a Louisville restaurant patron pointing a handgun at armed Black Lives Matter protesters who swarmed the outdoor dining patio during demonstrations in honor of Breonna Taylor on the day of the Kentucky Derby.

A reporter for the Louisville Courier-Journal tweeted several photos and videos of the incident. A man was seen pointing his pistol at several demonstrators during an altercation. Several protesters also appeared to be carrying firearms. Video shared by the newspaper showed a female demonstrator directing others to move away down the block, and tensions at the restaurant appeared to dissipate.

“During the encounter both patrons and protesters brandished firearms,” Smiley said in an email to Fox News. “This incident occurred after the arrests of southbound protesters in the area on the 1500 block of Bardstown Road. The arrests of that group were made after protesters repeatedly blocked the roadway despite officers giving multiple verbal requests for them to utilize the sidewalk.”

Protesters marched outside Churchill Downs ahead of the 147th Kentucky Derby in Louisville Saturday.

People carried signs with messages that included, “We haven’t forgotten Breonna,” “No Justice, No Peace,” and “No Justice, No Derby.” Black Lives Matter Louisville, Black Market KY, Color of Change and UltraViolet commissioned a plane banner that flew over Churchill Downs with the message, “Protect Black Women. Divest from Police,” the Louisville Courier-Journal reported.

Louisville Metro Police Department shared a livestream on Facebook of their protest response. Video showed protesters surrounding and shouting profanities at officers making an arrest. At least one individual was seen waving a Black Lives Matter banner. A female voice narrating the video said officers were surrounded while making an arrest on a woman who refused to stand and walk on her own.

At least five protest-related arrests were made Saturday.

Records shared with Fox News said individuals arrested had ignored several announcements to disperse from the roadway and remain on the sidewalk. Police said the activity in the street brought alarm to several businesses.

One woman gave officers a short foot chase down the block after fleeing officers who tried to detain her. A man was charged with possession of a handgun by a convicted felon and first-degree wanton endangerment of an officer. He was arrested after an officer allegedly spotted open alcohol containers and a loaded handgun in the front seat of his vehicle.

Because The State has refused to crack down upon the lawless Black Lives Matter antagonists, those simply trying to enjoy and maintain the fruits of Western Civilization watch as all that was built before them withers away on the vine.

Watching our elite side with the zombie infestation eating away at the heart of our civilization is disheartening, but it was never our job to do anything but survive this madness.

There is no way to revive a lifeless corpse or regenerate what is already lapsed and lost.

Our job all along was to survive.

Because the point of no return for Black-Run America (BRA) is upon us, and it has absolutely nothing to do with our actions, but entirely because our elite have done nothing to stymie the hubris of Black Lives Matter.

The powder keg is all around us, and it’s our job to simply ignore the sparks once they start to go off.