Texas judge Andrew S. Hanen put a hold on the Obama amnesty, which will temporarily halt the rollout. The amnesty had been scheduled to begin Wednesday for the unconstitutional handouts of work permits and Social Security numbers to unlawful foreigners without underlying legislation from Congress.

NAPOLITANO: The burden of providing social welfare benefits to those that the President said were illegal but I’ve declared them to be legal essentially falls on the states and that was the states’ argument, that the President was causing them irreparable harm not Congress but the President by forcing them to spend money that they didn’t have. . .

This is a preliminary ruling. When judges make preliminary rulings like this there’s no jury in the case; this is 26 states saying ‘Judge look at what the President did, tell us preliminarily if we are likely to prevail.’ He spends a month examining the law and arguments from both sides and said ‘Yes, I think you will prevail and yes, I think you will suffer irreparable harm if I don’t stop the President, so I’m going to stop the President from doing this and why am I stopping him from doing it’ because according to this judge the President profoundly changed the law without going through the proper procedures for it. . .

This is the first of many judicial interventions in this case, but it is a rare event in our lifetimes in modern American history for a federal judge, a single federal judge to enjoin the President of the United States from doing something on his own. . .

Below, foreigners demand amnesty in Spanish. 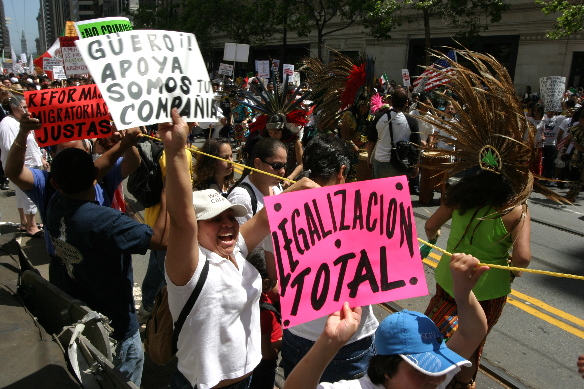 A federal judge late Monday halted President Obama’s deportation amnesty, ruling he overstepped his powers in trying to grant legal status and “benefits and privileges” to millions of illegal immigrants, in a stunning decision that chides the president and throws the White House’s plans into disarray just a day before applications were to be accepted.

The White House said it will appeal Judge Andrew S. Hanen’s decision, but it’s unclear whether the case could reach the circuit court in New Orleans or even the Supreme Court before Wednesday, which is when the Homeland Security Department had planned to begin accepting the first applications under the new amnesty.

“The DHS was not given any ‘discretion by law’ to give 4.3 million removable aliens what the DHS itself labels as ‘legal presence,’” Judge Hanen wrote in issuing an injunction. “In fact, the law mandates that these illegally-present individuals be removed. The DHS has adopted a new rule that substantially changes both the status and employability of millions. These changes go beyond mere enforcement or even non-enforcement of this nation’s immigration scheme.”

In the immediate sense, the ruling will become a major part of the debate over homeland security funding that has roiled Capitol Hill, with Republicans insisting Mr. Obama’s actions were unconstitutional and should be halted through Congress’s spending power, and Democrats backing their president by filibustering to block funding for the Homeland Security Department altogether.

The also ruling doesn’t mean those illegal immigrants are going to be deported immediately — indeed, Judge Hanen said they are likely not to be deported at all under Mr. Obama, who had set “priorities” putting them in little danger of ever being kicked out of the country, even without the formal amnesty.

The judge said Mr. Obama does have the right to set those priorities, but said it is likely a step too far for him to have set up a proactive program to grant them other benefits.

“The DHS may continue to prosecute of not prosecute these illegally-present individuals, as current laws dictate. This has been the status quo for at least the last five years and there is little-to-no basis to conclude that harm will fall upon the defendants if it is temporarily prohibited from carrying out the … program.”

One immigrant-rights group called his decision “judicial vigilantism,” while another called it a “minor legal bump” and said it’s “merely a matter of time” before they win legal status.

White House press secretary Josh Earnest was dismissive of the judge’s ruling, saying it contradicted Mr. Obama’s own lawyers, who told him he was “well within his legal authority.”

“Top law enforcement officials, along with state and local leaders across the country, have emphasized that these policies will also benefit the economy and help keep communities safe. The district court’s decision wrongly prevents these lawful, commonsense policies from taking effect and the Department of Justice has indicated that it will appeal that decision,” Mr. Earnest said early Tuesday.

Judge Hanen’s exhaustive opinion, which ran to 123 pages, eviscerated the administration’s legal arguments. Where Mr. Obama claimed he was only issuing “guidance” and using his powers of prosecutorial discretion to make decisions on a case-by-case basis, the judge ruled that wording was “disingenuous” and ignored the substance of what the president was trying to do.

He also said Mr. Obama hurt his own case by saying he’d acted to “change the law,” implying a much more substantive legal program than his administration was arguing in court.

The president’s new plan, known as Deferred Action for Parental Accountability, announced in November, was designed to cover more than 4 million illegal immigrant parents of U.S. citizens and legal permanent residents, granting them a three-year stay of deportation, Social Security numbers and work permits to compete legally for jobs. The November order also expanded a 2012 program for so-called Dreamers, or illegal immigrants brought to the U.S. as children.

The initial Dreamer program is still in place, and covers more than 600,000 illegal immigrants, but Judge Hanen halted its expansion, as well as the new program for parents.

About 95 percent of those who applied for the 2012 Dreamer program were approved, while nobody who didn’t meet the strict criteria was — both factors that Judge Hanen said suggested this wasn’t “discretion,” but rather a new substantive legal policy that should have gone through the usual rule-making process.

“While [the program] does not provide legal permanent residency, it certainly provides a legal benefit in the form of legal presence (plus all that it entails) — a benefit not otherwise available in immigration laws,” the judge wrote. “In this case, actions speak louder than words.”

Still, almost none of those who would have been approved for the amnesty are in danger of deportation, thanks to Mr. Obama’s other, less-noticed policies that order immigration agents only to go after illegal immigrants with serious criminal records. That likely means only a couple million of the nearly 12 million illegal immigrants in the U.S. are likely to be in any danger of deportation.

Immigrant-rights advocates had expected the ruling and had been working ahead of time to discredit Judge Hanen, saying he had a “bias” against them, based on a December 2013 ruling.

In that ruling, Judge Hanen had spotted the surge of illegal immigrant children crossing the border earlier on, and had been critical of how Homeland Security officials had handled it, accusing them of being complicit in human trafficking because they would deliver the children to their illegal immigrant parents in the U.S. without trying to deport either party.

Last summer’s spike in illegal immigrant children from Central America bore out Judge Hanen’s concerns, with the administration belatedly admitting that the ease of getting across the border and being connected with family here in the U.S. was helping spur the surge.