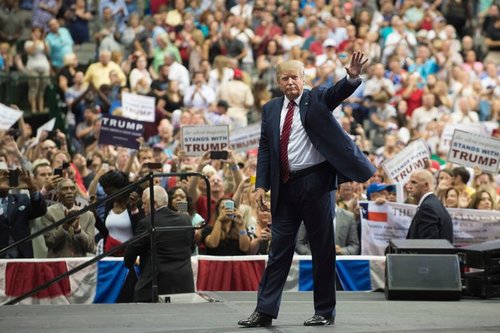 One can't help but wonder if someone at the Trump campaign is reading VDARE.com. Not just on immigration, because while we may be the best, a number of people are sounding the alarm on that most critical issue. But Trump is going beyond that and echoing, well, me on the need to build a new political coalition that can deliver victory to the Republican Party.

At the heart of this is economic populism. Trump said he'll be rolling out his tax plan in a few weeks. But The Donald isn't leaving much up to guesswork.

Hedge fund managers should worry, but corporations would get tax breaks if Donald Trump gets his way.

Their chief executives, though, might need to sweat — particularly if their compensation is "a total and complete joke" made possible by friends who serve on their corporate boards.

The real estate mogul who's leading Republican presidential polls previewed his tax plan Sunday in an appearance on CBS' "Face the Nation," saying the full proposal is about three weeks away.

"We have an amazing tax plan," Trump said. "We're going to be reducing taxes for the middle class, but for the hedge fund guys, they're going to be paying up."

Of course, you probably know where this is going. You can break from conservatism on immigration, Common Core, guns, and just about every other issue that the grassroots cares about. You can be forgiven and even praised by the Beltway Right as "pragmatic."

But confronting the Donor Class? Suggesting conservatism means something more than rewarding the same people who keep militantly supporting an Open Borders agenda? This means war!

A deep-pocketed conservative organization with a long list of Republican scalps said on Tuesday that it would launch a major ad campaign aimed at Donald J. Trump... The group, Club for Growth, is focusing its considerable firepower first on Iowa, where Mr. Trump has leapt to a significant lead over more conventionally credentialed Republican candidates, panicking Republican leaders.

The group will spend $1 million on advertising in the state starting on Thursday, with plans for further spending in the weeks ahead, the club’s president, David M. McIntosh, announced at a news conference in Washington on Tuesday.A deep-pocketed conservative organization with a long list of Republican scalps said on Tuesday that it would launch a major ad campaign aimed at Donald J. Trump in an effort to weaken him among the voters who have made him an unlikely but powerful force in the Republican presidential race...

Some fellow Republicans worry that his coarse comments about women and immigrants will undercut the party’s carefully calibrated effort to broaden its appeal for 2016. At the same time, some conservatives are worried that Mr. Trump’s success will spur other candidates to adopt his populist stances on taxes and free trade.  [Emphasis added]

The final paragraph sums up the conventional Republican strategy. Mouth the required platitudes of the Main Stream Media on questions involving culture, race, religion, feminism, and above all immigration, and hopefully, reporters won't be mean to you. The rubes will still vote for you because they have nowhere else to go. Then, once in office, deliver on the promises the Donor Class while ignoring the grassroots.

Sound familiar? It's the story of the Republican Congress following the 2014 midterm elections.

The problem for the GOP is that immigration is making it harder and harder for Republicans to take the rube vote for granted. More importantly, as the GOP isn't actually doing anything to help Republican voters who aren't millionaires, white turnout is not what it should be.

Meanwhile, the Hispanics and other "natural conservatives" favor progressive economic policies and more welfare even more than they support liberalized immigration laws. So this strategy is not only cowardly, it is self-defeating and makes no sense. (Unless you are a political consultant and trying to wring your client dry.)

What Trump is doing is crafting a new political coalition that could actually win. And at least some people get it.

It is painfully obvious that Trump is already laying the policy groundwork for a general election campaign. He’s not looking past the nomination, but he is also not boxing himself in with policy proposals he won’t be able to wriggle out of should he win the nomination.

Basically, he’s telling Republican voters the unvarnished truth about where he disagrees with us on a number of bedrock conservative issues, and he’s gambling that enough will stick him because they trust him more than the 15 others on existential issues such as immigration, border enforcement, lowering middle class taxes, simplifying the tax code, killing terrorists, and giving as good as he gets from the corrupt media.

He is also counting on the fact that The Base hates #GOPSmartSet enough that we are willing to go with a more moderate candidate if it means bringing down the corrupt, feckless, insulting, useless GOP Establishment.

If he can do this, if Trump can win the nomination by being less than pure on a few key conservative issues, he will enter the general election in a position to expand the Republican base by attracting millions of voters across the Midwest and Rustbelt who for the last 25 years have been ignored and discarded by both Republicans and Democrats.

[While the Establishment demands purity, Trump expands the GOP Base, September 15, 2015]

Of course, candidates like Carly Fiorina, Ben Carson, and Jeb Bush can hardly be called "pure." However, their departures from conservative orthodoxy don't jeopardize the Donor Class or the GOP Establishment. Thus, it is permitted.

Trump is actually reorienting the American Right in a more Identitarian, populist, and pro-worker direction. At the same time, he's actually more moderate on some of the issues (not tearing up the agreement with Iran, gay marriage, etc) that make many Whites simply unable to vote Republican. And despite all the wailing and gnashing of teeth, I'd wager Trump is more likely to win minority voters than some corporate bagman like Jeb or a transparent shill like Fiorina.

If he wins the nomination, Trump could actually do what Bush never could and create a New Republican Majority. Unfortunately for him, it's becoming increasingly clear (and explicit) that the purpose of the Beltway Right is to lose. If Trump is not destroyed in the next debate, look for the Republican Party's war on its own voters to escalate.