Earlier: WP & NYT: Because Blacks Tend to be Bored by Classical Music, They Should be Paid to Play It

Isn’t the answer to an organization, be it a tech company or an orchestra, boasting too many white participants in said activity just to fire all the white people and only hire non-whites if diversity, inclusion and equity is the primary goal?

Why spill so many needless words when the solution is just to ban the hiring of white people, and fire all whites currently employed in the field where whites have been declared disproportionately privileged, and the dearth of blacks can only be blamed on racism, structural inequality, and implicit bias?

U.S. orchestras are still mostly white. Here’s how to change that, by Tim Diovanni, Dallas Morning News, May 4, 2022

Dallas Morning News Editor’s note : This story is part of our focus on solutions put forward to tackle big and small social problems in our communities. Our evidence-based reporting explores what is being done in North Texas and looks for examples set by people doing it better elsewhere.

For decades, American orchestras have struggled with a lack of diversity among their musicians. They’ve changed auditions, set up fellowships and diversified their concert programs. But the largest U.S. orchestras remain mostly white.

Over the past 20 years, the Dallas Symphony Orchestra has employed three Black musicians full time, but none now. It has four Latino musicians. The situation is not much different at the Fort Worth Symphony Orchestra, which has one Latino musician and two Black musicians. Both orchestras employ more Asian and Asian American musicians, with 14 at the Dallas Symphony and 11 at the Fort Worth Symphony.

After the murder of George Floyd by a police officer in 2020, U.S. orchestras responded to calls for action by featuring more composers of color and bringing in more diverse guest conductors and soloists than ever.

But two years later, “far too little has been done” to change how orchestras hire and keep their musicians, says the Black Orchestral Network, which was launched this week by Black musicians from more than 40 orchestras.

Orchestras agree they need to better reflect the communities they serve so that more audiences — especially those historically underrepresented in concert halls — will feel welcome.

They see this as vital to staying relevant in an increasingly diversifying nation. In Dallas, non-Latino white people made up 28.8% of the population in 2020, with Blacks at 24.3% and Latinos at 41.5%, U.S. census figures show. 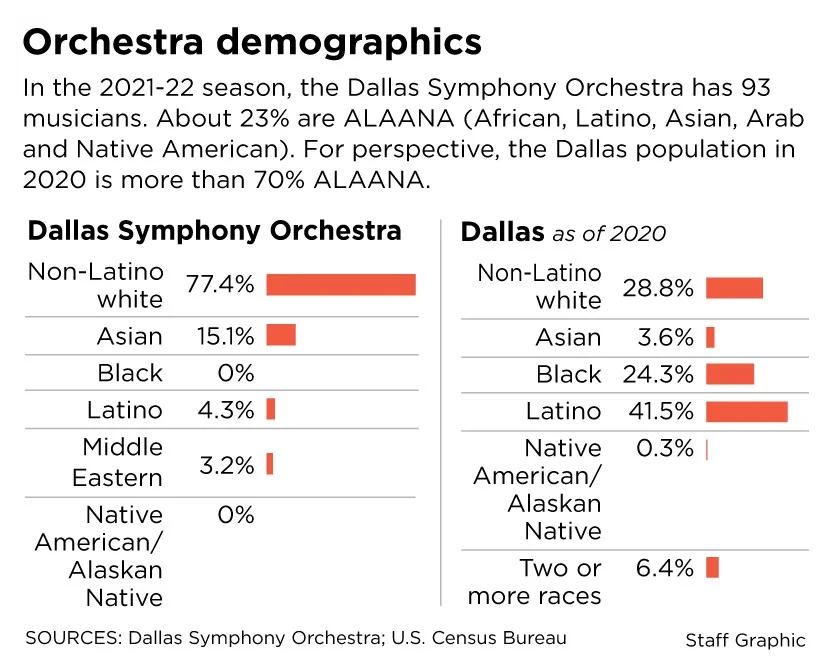 Several orchestras have addressed the problem through fellowships. Possibly the most successful has been the Detroit Symphony’s African American Orchestra Fellowship, which began in 1990 after Michigan legislators threatened to withhold funding the year before if the orchestra didn’t bring on more Black musicians. It had only one at that time.

The fellowship has placed one to two musicians in the orchestra for two-year stints. Of the 20 total fellows, two joined the Detroit Symphony — one of the 25 biggest budget orchestras in America — as full-time members.

One other fellow plays in a U.S. orchestra among the top 25, while others won jobs in Alabama, Colorado, Phoenix and even Thailand. Still others became teachers and freelancers, or arts administrators. All are still involved in music.

Cole Randolph, an African American cellist, started the Detroit fellowship during the pandemic, and felt welcomed into the orchestra. He did mock auditions and took lessons with players in the section, who pushed him to get better with honest feedback. He says this training helped him win the audition to join the cello section last year.

Still, fellowships at U.S. orchestras haven’t made a significant impact on the racial diversity of full-time orchestral musicians. A 2016 study from the League of American Orchestras concluded that fellowships “are not, in and of themselves, a solution to the persistent racial homogeneity of orchestras.” Of the 94 fellows for whom data was available, 39 (or 41%) played in orchestras — though not all were full time — 16 (or 17%) were soloists, freelancers or orchestra substitutes and 16 were teachers, the study found.

Despite probably tens of millions, if not hundreds of millions, spent to try and diversify orchestras across America with the requisite amount of black faces, the top orchestras across America are populated with primarily individual white people who collectively play some of the most beautiful music ever written (disproportionately written by dead white males, mind you)…

This can’t stand in 2022, as we are nearly two years removed from George Floyd dying of a drug overdose while in police custody.

Just fire all the white musicians, make it illegal to hire white people, and only hire and promote black and Hispanic musicians. There’s your diversity and equity, and artificial inclusion.

After all, whiteness is nothing more than a pejorative, a nearly unutterable expletive, save to curse its very existence.