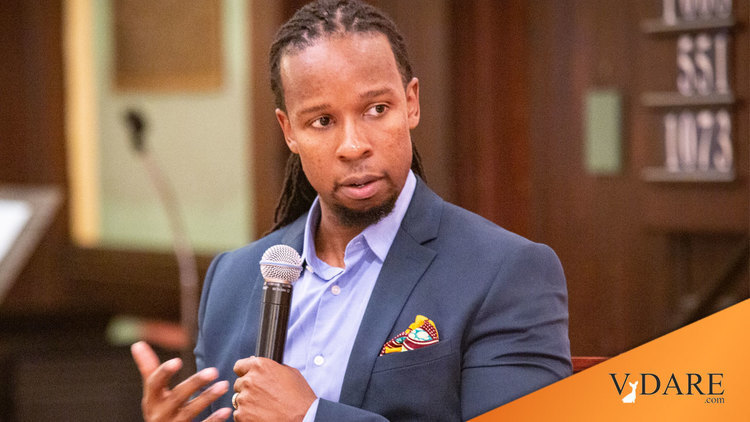 Ibram X. Kendi Explains To Whites That The Woke Don't Want To KILL Them, The Woke Just Want To Expropriate Their Land, Money, Culture, And Country

The Mantra of White Supremacy

The idea that anti-racist is a code word for “anti-white” is the claim of avowed extremists.

About the author: Ibram X. Kendi is a contributing writer at The Atlantic and the Andrew W. Mellon Professor in the Humanities and the director of the Boston University Center for Antiracist Research. He is the author of several books, including the National Book Award–winning Stamped From the Beginning: The Definitive History of Racist Ideas in America and How to Be an Antiracist.

Below a democratic donkey, the Fox News graphic read anti-white mania. It flanked Tucker Carlson’s face and overtook it in size. It was unmistakable. Which was the point.

The segment aired on June 25—the height of the manic attack on, and redefinition of, critical race theory, which Carlson has repeatedly cast as “anti-white.” It was one of his most incendiary segments of the year. “The question is, and this is the question we should be meditating on, day in and day out, is how do we get out of this vortex, the cycle, before it’s too late?” Carlson asked. “How do we save this country before we become Rwanda?”

Some white Americans have been led to fear that they could be massacred like the Tutsis of Rwanda. CRT=MARXISM, MARXISM→GENOCIDE EVERY TIME, read a sign at a June 23 Proud Boys demonstration in Miami. Other white Americans have been led to fear America’s teachers—79 percent of whom are white—instructing “kids to identify in racial terms,” as Blake Masters, a Republican candidate for the U.S. Senate in Arizona, said in May. “You are good or bad, depending on what you look like. At this point it is straight up anti-white racism. I don’t think we’re allowed to say that. But let’s call it what it is.”

Even when GOP politicians and operatives don’t openly “call it what it is,” they end up echoing Masters nonetheless, saying without saying that “critical race theory is explicitly anti-white,” to use the words of Christopher F. Rufo, a travel-documentary filmmaker turned leading critic of CRT. At his final campaign rally, in Loudoun County, Virginia, Governor-elect Glenn Youngkin said, “What we won’t do is teach our children to view everything through a lens of race where we divide them into buckets and one group is an oppressor and the other is a victim and we pit them against each other and we steal their dreams.”

Republicans provoked a backlash against CRT, which they also call anti-racism or wokism. Their backlash won 2021 elections. “But it wasn’t a backlash of parents,” William Saletan found in his close study of polling data. “It was a backlash of white people.”

What could be more racist than white voters disapproving of other white people’s children being forced to endure taxpayer-funded anti-white indoctrination?

And what do you do when you encounter a venomous snake?

I suspect that many Americans don’t know how much white-supremacist ideology shapes their political thought and America’s political discourse, and allows juries to exonerate racism and convict anti-racism.

With his anti-white mania graphic, Tucker Carlson yet again presented the most dangerous mantra in American politics: Attacks on racism are really attacks on white Americans that lead to white people being harmed. “Anti-racism is anti-white” is the old and explosive mantra of avowed white supremacists. It has been their organizing vehicle, fueling their rage, fueling their backlashes, fueling their delusions.

All year long, this white-supremacist mantra has been fueling what Martin Luther King Jr. once called the “white backlash” against last year’s racial reckoning. … It is inciting the false claim that anti-racist books and education are harmful to white children.

When, obviously, it’s good for white children to be taught young their position (subordinate) in the Kendiist America they are growing up in, which will have no room for any uppitiness from whites.

“Anti-racism is anti-white” is the mantra dividing the Democratic Party, especially since the 2021 elections. It is the mantra unifying the Republican Party, especially since the 2020 election. There are numerous variations on this mantra. “Wokeism” or anti-racism or critical race theory or the 1619 Project or “cancel culture” or Black Lives Matter or anyone challenging racial inequity is said to be anti-white or racist or an anti-white racist. And variations on this mantra have become so ubiquitous in the American political discourse that people can easily dismiss or deny its origin in white-supremacist thought. …

Allen J. Ellender, the Jim Crow segregationist and senator from Louisiana, framed the Voting Rights Act of 1965 as “discrimination … being practiced to wipe out discrimination.” In a televised presidential-campaign speech in 1976, Ronald Reagan said, “If you happen to belong to an ethnic group not recognized by the federal government as entitled to special treatment, you are a victim of reverse discrimination.” In 1995, Senator Phil Gramm of Texas said, “You cannot give somebody preference over somebody else without discriminating against the person who is not receiving the preference.” Or, as Chief Justice John Roberts wrote in 2009, “The way to stop discrimination on the basis of race is to stop discriminating on the basis of race.”

For five decades since the civil-rights movement, Republicans (and many non-Republicans) have expressed two conflicting racial mantras: (1) racism no longer exists, and (2) racism is spreading against white people. Since Joe Biden’s election, this second mantra has overtaken the first.

They just want your land, money, culture, and country, not your lives.

Of course, considering the innate evilness of whiteness, that wouldn’t be unreasonable either:

Then again, if there is an army that is mobilizing, that is coming, that is here—it is made up of white supremacists. Their carnage is here. …

Seriously, Kendi should simply explain to whites that they don’t have to worry about genocide because it would be silly for the Woke to kill the white geese that lay the golden eggs, that all the hate rhetoric directed at whites is merely a mercenary ploy to bully them into allowing their wealth to be expropriated. The people running and funding the Great Awokening are not bloodthirsty savages, they are instead materialistic careerists like Kendi who have found that anti-white defamation is a clever way to boost their incomes and the Democratic Party’s prospects.

Sure, an occasional Waukesha SUV will take the reams of anti-white defamation a little too seriously, but, in the big picture, Radio Kendi will never broadcast the code message, “Chop down the white trees.” What would be the profit in that?

Indeed, when you put it that way, the “white genocide” rhetoric sounds pretty silly.

Of course, the Kendi Krew isn’t ever going to put it that way because that would give the game away. Instead, they will continue to rant that whites getting concerned about the ever increasing anti-white hate rhetoric in, say, The Atlantic just proves how hateful whites are and thus deserve what they have coming to them.