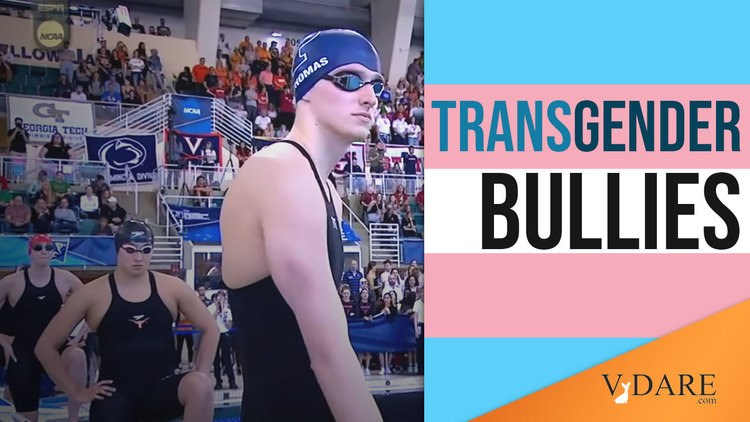 It's Time To Tell The Truth About Transgenderism

THE UNTOLD STORY
The Truth About Pervs
Steve Sailer

In perhaps the biggest setback yet suffered by the transgenderist juggernaut, the International Swimming Federation has sunk the Olympic gold dreams of Will “Lia” Thomas, the also-ran male swimmer who declared himself a woman and won an NCAA championship. In a shocking spasm of sanity, the ruling body declared that ex-men who had gone through male puberty (from age 12 onward) are ineligible to enter women’s events because of the permanent advantages in size and strength they have gained.

It’s hard to lose when you have as much of an ideological tailwind at your back as Thomas has had, but his compulsion to crush his enemies and see them driven before him—and to hear the lamentation of the women he beat—made him a remarkably unsympathetic standard-bearer.

And yet, Thomas’ toxic masculinity is not unusual among the better-known transgenders. An extraordinary fraction of the most prominent and influential male-to-female transgenders are, when you stop and think about them, obvious examples of male ego, aggression, and self-assertion run amok. …

The right tends to assume that the only possible causes for transgenderism could be leftism and a lack of masculinity, so they are unable to notice that many of the best-known M-to-Fs are excessively masculine and right of center politically.

The left assumes that Lia Thomas and Zoey Tur must be oppressed victims of The Patriarchy, making them incapable of grasping how many famous transgenders are selfish bullies.