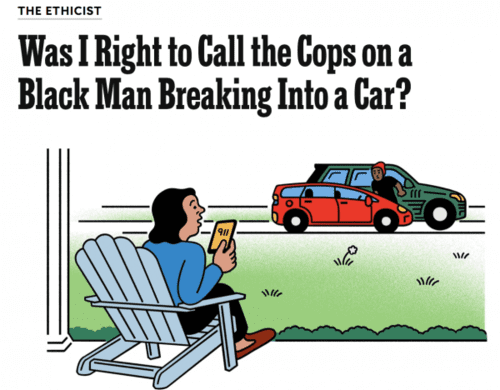 We already know in Grand Rapids it might soon be a criminal misdemeanor to call the police on people of color, but the reporters in elite newsrooms across the United States are also hard at work conditioning whites to feel guilty about calling the police on blacks in the act of breaking the law. Take a look at this letter to the editor from a white person published in the New York Times Magazine, answered by Kwame Anthony Appiah.

Was I Right to Call the Cops on a Black Man Breaking Into a Car?, New York Times Magazine, May 7, 2019

Recently, I witnessed a young black male cut across my yard, duck between my neighbors’ two cars and try the doors of both, before “breaking” into the unlocked one. I opened my back door and yelled, “I see you getting into that car!” He took off running. I called the police and then posted to the (admittedly sometimes racially charged) Nextdoor app, in the hopes that my neighbors would check the locks on their cars and homes.

Break-ins are fairly common in my neighborhood, and this isn’t the first time that I’ve witnessed what appeared to be a theft and called the police. It was, however, the first time I was certain the suspicious person was a black man. I immediately felt a pang of guilt for calling the police and haven’t been able to stop thinking about it, given the tragic way things too often end between police and people of color.

I feel an obligation to my family and my neighbors to report crimes. But I’d rather have my car broken into than have a person’s life ruined by my 911 call. And honestly, I don’t even know if it’s a crime to open someone’s unlocked vehicle.

If the incident had been a forced entry or violent in any way, I would feel less torn about having called the police. And really, people should know better than to leave their cars unlocked. I sincerely hope the young man wasn’t apprehended but instead was just scared off and won’t lurk around my home again. But what if he had been arrested? I also shudder to think how many young black men vaguely matching his description were harassed by officers after my call.