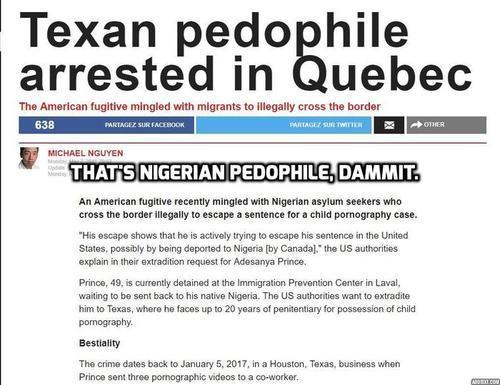 Canadian blogger BlazingCatFur links to a story from Montreal, originally in French, with the aid of Google Translate, which he headlines: Nigerian pedophile takes Justin up on his offer of a free ride in Canada.

That's a better headline than the MSM picked—whether the headline says Un pédophile texan a été arrêté au Québec or Texan pedophile arrested in Quebec , the story is not about a Texan, but about a Nigerian named Adesanya Prince who lived in Texas until recently.

An American fugitive recently mingled with Nigerian asylum seekers who cross the border illegally to escape a sentence for a child pornography case.

"His escape shows that he is actively trying to escape his sentence in the United States, possibly by being deported to Nigeria [by Canada]," the US authorities explain in their extradition request for Adesanya Prince.

Prince, 49, is currently detained at the Immigration Prevention Center in Laval, waiting to be sent back to his native Nigeria. The US authorities want to extradite him to Texas, where he faces up to 20 years of penitentiary for possession of child pornography.

The crime dates back to January 5, 2017, in a Houston, Texas, business when Prince sent three pornographic videos to a co-worker.

"Two videos show adult people having sex with dogs, say the US authorities in the extradition request. The third video showed a very young child aged 2 to 4, naked, with an adult man. "