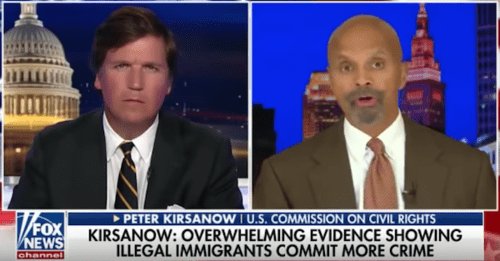 There’s been a lot of stupid talk from liberals recently following the murder of Mollie Tibbetts that illegal aliens and foreigners generally commit fewer crimes than US citizens. The talking points are typical propaganda of the left, designed to advance the Democrat agenda of open borders and replacing traditional Americans with foreigners who prefer big government.

Peter Kirsanow, a member of the United States Commission on Civil Rights, appeared with Tucker Carlson on Thursday to discuss the facts about illegal alien crime. 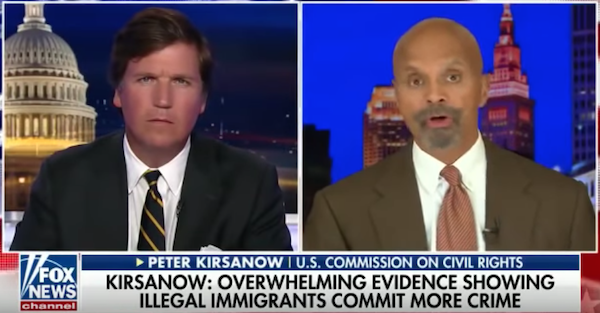 Kirsanow’s recitation of disturbing crime statistics was an eye-opener about the cost of open borders diversity.

TUCKER CARLSON: Iowa college student Molly Tibbetts is dead; she was killed by an illegal alien. It’s another reminder that our governing class refuses to enforce our country’s laws. When they’re called out on that, they deny they’re doing anything wrong. Some say we should be grateful that illegal aliens enter this country freely because they are smarter, less dangerous and generally more impressive than regular Americans. [. . .]

Peter Kirsanow knows a lot about this subject; he’s a lawyer, a US Civil Rights Commissioner and the author of the book Second Strike; he joins us here tonight. Thank you very much for coming on. So it seems like a simple question to answer because it’s a data-based question: to what extent do people here illegally add to our crime problem; do we know the answer?

PETER KIRSANOW: We have a pretty good understanding of it, and it’s significant: I heard your lead-in and you’re absolutely right. You have to disaggregate data because the various organs of both federal and state government consciously avoid getting this data. You could probably find out for example how many Norwegian prisoners there are in Minnesota but it’s difficult to disaggregate data with respect to illegal aliens, but it can be done.

There’s something called the State Criminal Alien Assistance Program [SCAAP] and you can extrapolate from that and get pretty reliable data. Now Alex [Nowrasteh] is very knowledgeable; that’s why it’s puzzling that he won’t acknowledge the overwhelming amount of data that shows that illegal aliens not only commit more crimes at a higher rate, that is than lawful residents, but more serious crimes at a far higher rate than lawful residents. And we’re not talking about a little bit; he conveniently mentioned Texas to claim that the homicide rates among illegal aliens is 44 percent lower than that for lawful residents. He chose the one state where it is true that the homicide rate is lower for illegal aliens by 15 percent not 44 percent, but if you look at every of their state it’s significant how much more — not just the homicide rate, but every other serious crime: rape, aggravated assault, you name it — so much more.

There are over 300,000 illegal aliens incarcerated: we’re talking billions of dollars in incarceration costs and all other kinds of costs. And the base that open borders advocates often steal is that they don’t count the millions of offenses in crimes committed by illegal aliens such as document theft, Social Security, driver’s licenses, but also illegal appropriation of welfare benefits, and we’re talking about billions of dollars.

Let’s put that aside, and let’s just talk about the more serious crimes. John Lott did probably the most methodologically rigorous and comprehensive examination of this by using Arizona Department of Corrections data, and he went over a 30-year period. This was exhaustive, and this is what he does — he’s a scholar — and what he showed is that illegal aliens don’t just commit more crime or more serious crimes by say, 5 percent more or 10 percent more than awful residents, but by 250 percent more.

For a long time when I listen to, for example people talking heads on television, and you know at the Civil Rights Commission every once in a while someone tries to pull a fast one on us, I’m astonished by the fact that we have copious data on this, and it appears as if there are a lot of entrenched interests that want to make us believe that this is not a serious issue.

CARLSON: And I think we’d have the right to know — I mean, maybe Americans would decide you know it’s worth it actually, I want more illegal aliens here. Maybe they wouldn’t, but we have a right to the information, but that’s why I’m so grateful you came tonight, Peter Kirsanow.