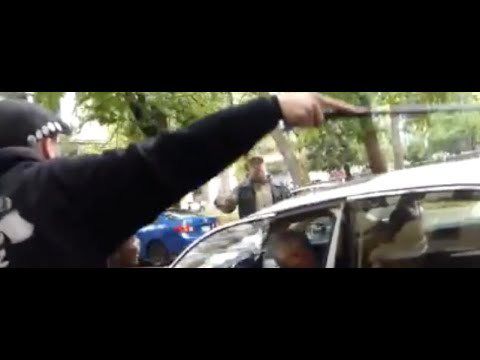 Earlier, from August 2017:  Car That Crashed Was Reportedly Being Swarmed By Antifa—Was It Self-Defense?

Shocking footage from Occupied Portland shows Antifa activists surrounding a vehicle that failed to obey their "orders" to reroute for their protest.[Anarchy! Portland residents' fury at mayor for allowing Antifa activists to take over street, direct traffic, abuse motorists and attack driver during march over police shooting of a black man,Daily Mail, October 8, 2018]

One Antifa appears to be leaning in front of the car and into the hood to block it from driving as it makes a turn, his shoes sliding on the street.

As the trial of James Fields draws near, it's a clue to me of what he might have been up against. Fields, 21, is charged with the murder of Heather Heyer, 32, after his car struck protestors in Charlottesville during the 2017 Unite the Right rally.

Driver of a Car vs. Angry Crowd on Foot is a showdown that misleadingly appears to favor Driver. Driver is behind the wheel of large, heavy, fast-moving object. Driver seems to have the protective capabilities of locked doors.

But Driver is also trapped, in a way. Driver is stripped of personal identity by the very object that appears to protect him, thus emboldening the crowd to smash windows, damage the body, open doors, drag people out and beat them severely.

Remember Reginald Denny? He was behind the wheel of a semi-trailer. It did not protect him.

James Fields knew that his Angry Crowd on Foot considered him worthy of death for his beliefs. It's easy to imagine that setting off a panicked reaction.

The Narrative on political violence right now is maddeningly biased against the right. As the left gets more violent, they still retain the shimmer of being "anti-racist", while the right carries the bad-guy designation from Bull Connor days. So a left-winger aiming a flamethrower at a right-winger is "nothing", while a right-winger speaking sharply to a left-winger is a brutal, white supremacist attack.

Antifa figures they own the street, and they're not wrong.