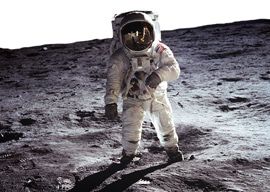 From my movie review in Taki’s Magazine:

Is First Man, Damien Chazelle’s moody and moving biopic featuring Ryan Gosling as astronaut Neil Armstrong, anti-American for not having a flag in it?

Actually, this family drama features a lovely shot of Armstrong’s young son raising the American flag at his school while his father is on his first space mission.

Or is First Man a “right-wing fetish object,” as The New Yorker complains, because the moon landing was America’s most obviously awesome accomplishment of the pre–diversity über alles era? Richard Brody went on to whine that the movie is “whiter than a Fred-and-Ginger ballroom set,” with Chazelle racistly subscribing “to the misbegotten political premise that America used to be greater,” when, as everybody knows nowadays, he should instead have highlighted “Hidden Figures.”

We live in an era when to be an accomplished straight white man like Chazelle is increasingly seen as a political provocation undermining today’s most cherished belief—that the past was all just a giant conspiracy to make whitey look good. But in his brief but spectacular career, Chazelle has shown he simply doesn’t give a damn.