There is no sense in complaining that this or that Trump administration story isn’t bigger news. There is simply so much garbage pouring out of 1600 Pennsylvania on any given day that it’s beyond the capacity of any human to properly comprehend and become outraged by all of it.

And yet, I would like to complain that it should be bigger news that the second-most-powerful person in the White House has in recent days been revealed to have repeatedly endorsed an extremely racist 1970s novel, The Camp of the Saints, that is "revered" in the foulest depths of the white-power movement. Newly infamous Iowa congressman/white nationalist Steve King just endorsed The Camp of the Saints in a radio interview; two days ago, white supremacist Jared Taylor—who organizes an annual conference attended by KKK figures and "white pride" advocates—celebrated its newfound prominence on Twitter. 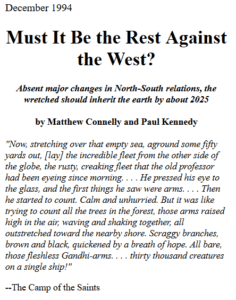 In contrast, from The Atlantic Monthly back in 1994:

Must It Be the Rest Against the West?

Absent major changes in North-South relations, the wretched should inherit the earth by about 2025

by Matthew Connelly and Paul Kennedy

Connelly and Kennedy are professors of history.

“Now, stretching over that empty sea, aground some fifty yards out, [lay] the incredible fleet from the other side of the globe, the rusty, creaking fleet that the old professor had been eyeing since morning. . . . He pressed his eye to the glass, and the first things he saw were arms. . . . Then he started to count. Calm and unhurried. But it was like trying to count all the trees in the forest, those arms raised high in the air, waving and shaking together, all outstretched toward the nearby shore. Scraggy branches, brown and black, quickened by a breath of hope. All bare, those fleshless Gandhi-arms. . . . thirty thousand creatures on a single ship!”

–The Camp of the Saints

Welcome to the 300-page narrative of Jean Raspail’s disturbing, chilling, futuristic novel The Camp of the Saints, first published in Paris twenty-one years ago and translated into English a short while later. Set at some vague time–perhaps fifteen or twenty years–in the future, the novel describes the pilgrimage of a million desperate Indians who, forsaking the ghastly conditions of downtown Calcutta and surrounding villages, commandeer an armada of decrepit ships and set off for the French Riviera. The catalyst for this irruption is simple enough. Moved by accounts of widespread famine across an Indian subcontinent collapsing under the sheer weight of its fast-growing population, the Belgian government has decided to admit and adopt a number of young children; but the policy is reversed when tens of thousands of mothers begin to push their babies against the Belgian consul general’s gates in Calcutta. After mobbing the building in disgust at Belgium’s change of mind, the crowd is further inflamed by a messianic speech from one of their number, an untouchable, a gaunt, eye-catching “turd eater,” who calls for the poor and wretched of the world to advance upon the Western paradise: “The nations are rising from the four corners of the earth,” Raspail has the man say, “and their number is like the sand of the sea. They will march up over the broad earth and surround the camp of the saints and the beloved city. . . .” Storming on board every ship within range, the crowds force the crews to take them on a lengthy, horrific voyage, around Africa and through the Strait of Gibraltar to the southern shores of France.

But it is not the huddled mass of Indians, with their “fleshless Gandhi-arms,” that is the focus of Raspail’s attention so much as the varied responses of the French and the other privileged members of “the camp of the saints” as they debate how to deal with the inexorably advancing multitude. Raspail is particularly effective here in capturing the platitudes of official announcements, the voices of ordinary people, the tone of statements by concerned bishops, and so on. The book also seems realistic in its recounting of the crumbling away of resolve by French sailors and soldiers when they are given the order to repel physically–to shoot or torpedo–this armada of helpless yet menacing people. It would be much easier, clearly, to confront a military foe, such as a Warsaw Pact nation. The fifty-one (short) chapters are skillfully arranged so that the reader’s attention is switched back and forth, within a two-month time frame, between the anxious debates in Paris and events attending the slow and grisly voyage of the Calcutta masses. The denouement, with the French population fleeing their southern regions and army units deserting in droves, is especially dramatic.

Why revisit this controversial and nowadays hard-to-obtain novel? The recovery of this neglected work helps us to call attention to the key global problem of the final years of the twentieth century: unbalanced wealth and resources, unbalanced demographic trends, and the relationship between the two. Many members of the more prosperous economies are beginning to agree with Raspail’s vision: a world of two “camps,” North and South, separate and unequal, in which the rich will have to fight and the poor will have to die if mass migration is not to overwhelm us all. Migration is the third part of the problem. If we do not act now to counteract tendencies toward global apartheid, they will only hurry the day when we may indeed see Raspail’s vision made real.