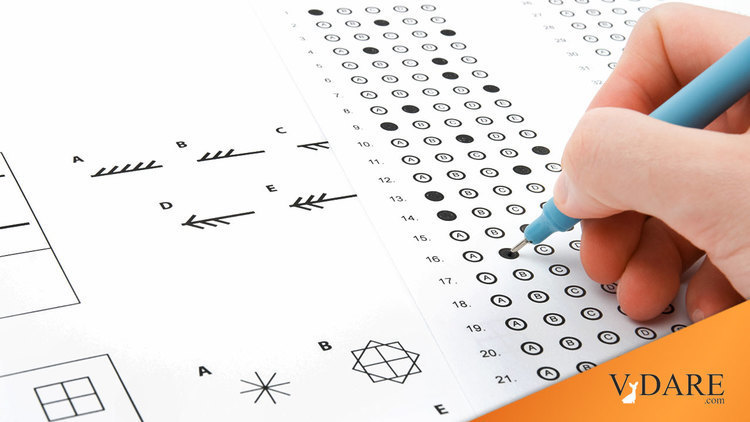 Critics of the SAT and other standardized testing are disregarding the data.

A pretty good defense of the SAT, although in citing how well it predicts college grades, the authors don't emphasize the restriction of range issue enough. Colleges start out massively sorted by GPA and SAT/ACT scores, so studying the minor variations within the colleges misses most of the usefulness of test scores. They don't let kids with average SAT scores into Caltech, so they don't have any data points of average kids flunking out.

I'd like to see a correlation study of BYU, a Mormon college that has a wide range of SAT scores and, relative to other private colleges, a wide range of family incomes. (BYU charges relatively low tuition by having bigger class sizes.) BYU would be reasonably safe to study because race wouldn't be a big factor in the results.

Reading through the comments, I see that lots of people are convinced that the positive correlation between the socioeconomic status of parents and the child's SAT scores proves that colleges should junk the SAT and only rely on GPA, extracurricular activities, essays, and so forth. But are those other measures all that independent?

A friend of mine over the last half century was a B- student in grade school and high school — one of a big family of a widowed mother, who was working too hard to keep them fed to have time to make sure he did his homework. But he was always obviously the top math student in our class, even if he didn't do his homework. He got a 790 on the SAT - Math. Went to Berkeley (you could do that back then before you needed a >4.0 gpa to get in) and got a BS and MS in Chemical Engineering. Went into computer networks in the 1980s and made a fortune in the 1990s.

Along these lines, allow me to give away my son's killer idea for a business: the School Project Store. It opens every evening at 8pm, about when students first mention to their parents that they have a huge project due tomorrow morning, so could you drive me to Staples to get a tri-fold board, a glue stick, and some colored paper?

In the future, however, well-heeled parents will just drive their children to the School Project Store where consultants, such as empty-nester parents who have been through the school project wars over the years, will be waiting to listen patiently. The completed school projects can be picked up on the way to school at 8am.

C'mon, you know this business idea will make millions.

Of course, bricks and mortar retailing is so 20th Century. The real fortune will be made off a smartphone app called Glustik. Empty nester parents with houses full of leftover school project supplies will bid to be the lowest price provider of overnight school projects on emergency requests by rich parents. It will be disruptive!