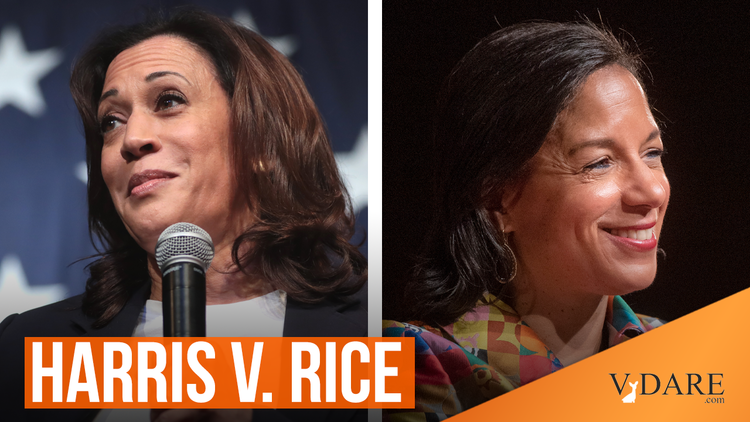 With Karen Bass, an obscure L.A. Congresswoman, starting to fade in the Biden Veep hunt due to her Fidel Castro-worship likely being inconvenient in the purple state of Florida, the two most prominent Black Women left appear to be Obama Administration foreign policy maven Susan Rice and California Senator Kamala Harris.

Neither appear to be close to 50% sub-Saharan by DNA.

Harris is half Tamil and her Stanford economics professor father is from the Malcolm Gladwellish mulatto middle-class of Jamaica. (Harris is also half-Jamaican.)

Rice has a white husband and her Trump-supporting son, right, the president of the Stanford Young Republicans, is pale (although he has slightly sub-Saharan features).

She is from W.E.B. Du Bois’s Talented Tenth (or, more likely, Talented One Percent).

As the 2011 Libyan Civil War progressed, the United States and its allies offered a choice for Colonel Muammar Gaddafi and his aides: step down from power or face an international response. Rice offered some of the toughest rhetoric toward Gaddafi, criticizing his denials of atrocities against his own citizens as “frankly, delusional”.[55] In a closed-door Security Council meeting in April 2011, Rice reportedly stated that Gaddafi loyalists engaged in atrocities, including terrorizing the population with sexual violence, and that Gaddafi’s troops has been issued Viagra.[56] Together with National Security Council figure Samantha Power, who already supported the U.S.-led military intervention in Libya, and Secretary of State Hillary Clinton, who came to support it, the three overcame internal opposition from Defense Secretary Robert Gates, security adviser Thomas E. Donilon, and counterterrorism adviser John Brennan, to have the administration advance a UN proposal to impose a no-fly zone over Libya and authorize other military actions as necessary.[18][57]

On March 17, 2011, the UK, France and Lebanon joined the U.S. to vote for United Nations Security Council Resolution 1973 while Brazil, Germany, and India joined permanent Security Council members China and Russia in abstaining. Rice and Clinton played major roles in gaining approval for the resolution.[18][58] Clinton said the same day that establishing a no-fly zone over Libya would require the bombing of air defenses. Rice said, “we are interested in a broad range of actions that will effectively protect civilians and increase the pressure on the Gaddafi regime to halt the killing and to allow the Libyan people to express themselves in their aspirations for the future freely and peacefully”.[59]

The No-Fly Zone obviously meant that the mighty U.S. was committed to the overthrow and murder (as it turned out, by sodomization) of Col. Qadaffi. In turn, the murder of Gadaphee, who had made a deal with Italy’s Berlusconi to reduce sub-Saharan migration thru the Mediterranean, led to the ensuing migrant crisis.

So Rice’s record of decision-making is catastrophic.

On the other hand, Rice’s private life appears to have been decorous: her one marriage at age 28, two kids, still married.

In contrast, Kamala Harris started her career by learning the true essence of politics while serving in various positions under master politician Willie Brown.