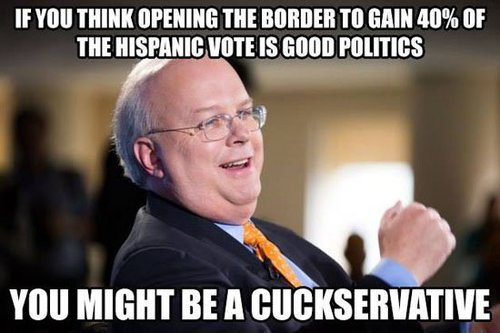 The Cuckoo In The Nest: Jared Taylor's Open Letter To Cuckservatives

What does it mean? Well, a cuckservative is a self-identifying conservative who is in the same relation to the left-liberal, Cultural Marxist narrative as a deceived husband—the cuckold—is to his wife's lover. Playing the part of the adulterous wife here are all the things that conservatives claim to hold dear—restraint in government, a wide radius of trust, nation, marriage, Christianity, traditional high culture.

The cuckservative smiles with approval and understanding as this wife goes off to spend the weekend with her progressive lover. The lover of course looks on the cuckservative with amused contempt. And yes, that probably is how Al Franken, or Rachel Maddow, or the editorial staff of The New York Times regard Jeb Bush, or Sean Hannity, or the editorial staff of The Weekly Standard.

If you are of the same kidney as myself—a bit old-fashioned, somewhat fastidious about using the right locution in the appropriate location—you probably winced at the word "cuckservative." It sounds smutty and low-rent.

Shakespeare was especially fond of cuckoldry as an occasion for humor. The horns that supposedly grow out of a cuckold's head are one of his favorite images. Here's Dr Johnson, commenting on Shakespeare's play The Merry Wives of Windsor, quote:

There is no image which our author [that is, Shakespeare] appears so fond of as that of a cuckold's horns. Scarcely a light character is introduced that does not endeavor to produce merriment by some allusion to horned husbands. As he wrote his plays for the stage rather than the press, he perhaps reviewed them seldom, and did not observe this repetition, or finding the jest, however frequent, still successful, did not think correction necessary.

End quote. So you can't object to "cuckservative" on purely etymological grounds. It is certainly nothing like as objectionably disgusting as "teabagger," which leftists, after five years, still consider to be the very acme of refined wit.

So there are legitimate reasons to shun the word "cuckservative." It seems to have gotten itself firmly planted on the Dissident Right, though, and has inspired some good commentary and much humor, not all of which is blue.

Among the commentary, by far the best was the short essay by Jared Taylor at American Renaissance. The essay is titled An Open Letter to Cuckservatives, and is cast in that epistolary form. Sample:

Do you stand for limited government and a balanced budget? Count your black and Hispanic allies. Do you admire Thomas Jefferson? He was a slave-holder who will end up on the dung heap with the Confederate flag. Do you care about stable families and the rights of the unborn? Look up illegitimacy, divorce, and abortion rates for blacks and Hispanics. Do you cherish the stillness at dawn in Bryce Canyon? When the park service manages to get blacks and Hispanics to go camping they play boom-boxes until 1:00 a.m. Was Ronald Reagan your hero? He would not win a majority of today's electorate.

Do you love Tchaikovsky? Count the non-whites in the concert hall. Do you yearn for neighborhoods where you can leave the keys in your car? There still are some; just don't expect them to be "diverse." Are hunting and firearms part of your heritage? Explain that to Barack Obama or Sonia Sotomayor. Are you a devout Christian? Muslim immigrants despise you and your faith. Do you support Israel? Mexicans, Haitians, Chinese, and Guatemalans don't.

I'll admit to bias here. I am one of Jared's keenest admirers. I regard him as a true patriot and an outstanding exemplar of that dwindling phenomenon, the American gentleman. Jared's acceptance of the word "cuckservative" dispels my misgivings. (Kevin MacDonald seems to have had a similar effect on Peter Brimelow.)

Make up your own mind about it. Just be sure, before you do, to read Jared's "Open Letter to Cuckservatives." It's a gem. I'm very curious to see what the cuckservatives come up with by way of a riposte, supposing they deign to notice it.