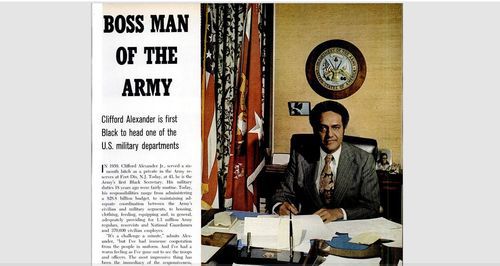 Steve Sailer referenced the AFQT (Armed Forces Qualification Test) misnorming fiasco of late 70s and 80s, which I thought was well-known, but it turns out that the only reason I know about it is because I read Steve Sailer, and he knows. The first twenty results for "AFQT + misnorming" on Google are technical reports and a Steve Sailer blog item referencing "Great Moments In Military Recruiting". (Briefly, they changed the test for admission to the Armed Forces, and by mistake let a lot of noticeably dumb people enlist.)

Steve asked if the misnorming was accidental or deliberate. I don't know, but I do have a data point: the Secretary of Army didn't believe standardized tests meant anything.  I found this out from a thesis published by the Naval Postgraduate School in 1981.

Although certain military authorities such as former Army Secretary Clifford Alexander contend that there is no relationship between job performance and AFQT scores, most others conclude that they are directly and strongly correlated.

Performance of Navy service members erroneously enlisted as a result of the misnorming of ASVAB 6, by John F.Boyer, 1981[PDF]

As soon as I heard that a Secretary of the Army named "Alexander" didn't believe that standardized tests measured anything, I said to myself "I bet he was the 'First Black" SecArmy", and I was right.

Alexander, the son of a Jamaican immigrant and a welfare worker, apparently had a high degree of talent himself, and must have passed many standardized tests as a young man.  People magazine said in 1978 that

A brilliant student, Cliff won a scholarship to Fieldston, a private school in Manhattan, where he was the only black child in his class until the ninth grade. (Alexander was so grateful to Fieldston that in 1977 he turned down an invitation from President and Mrs. Carter in order to speak at the school’s 100th anniversary.) At Harvard, where Dean McGeorge Bundy spotted him, Alexander was president of his class and a cum laude graduate in American government. Yale Law School was next, and directly after graduating in 1958, Alexander served a six-month hitch in the Army—his only prior connection with the military. Neither at Fort Dix—nor anywhere else in his distinguished life—does Alexander recall encountering personal discrimination. “It was known that if a noncom used a racial epithet he would lose a stripe or two,” the Secretary says.

Many really bright people don't believe in IQ tests. It's partly a desire to believe that you've achieved something by your own non-hereditary merits, partly because of what George Orwell said about about the British "intelligentsia" in wartime:

"One has to belong to the intelligentsia to believe things like that: no ordinary man could be such a fool."

But I assume the reason the "First Black" Secretary of the Army would hold the unscientific folk-belief that psychometry doesn't work and predict real-word performance is because of the "test gap"—black always score lower on standardized tests.

For more on the Army, black troops, and IQ, see

by me, and of course, Sailer’s Great Moments in Military Recruiting.