The Rape of a Nation

The Birth of a Nation is a 2016 American period drama film about Nat Turner, the slave who led a slave rebellion in Southampton County, Virginia in 1831. The film is co-written, co-produced and directed by Nate Parker, in his directorial debut. … 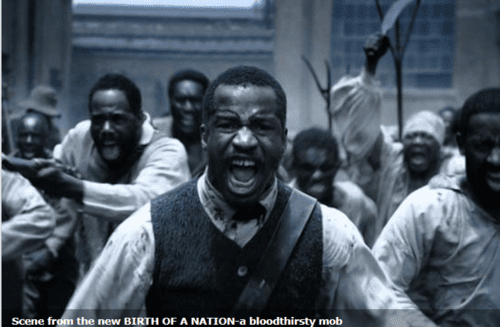 The Birth of a Nation is written, produced, and directed by Nate Parker, who also stars as Nat Turner. Parker wrote the screenplay, which was based on a story by him and Jean McGianni Celestin.[4] Parker learned about Turner from an African-American studies course at the University of Oklahoma. …

The 2016 film uses the same title as “the title of D.W. Griffith’s 1915 KKK propaganda film in a very purposeful way”, said The Hollywood Reporter.[5] Nate Parker said his film had the same title “ironically, but very much by design”.[6] He told the magazine Filmmaker:

Griffith’s film relied heavily on racist propaganda to evoke fear and desperation as a tool to solidify white supremacy as the lifeblood of American sustenance. Not only did this film motivate the massive resurgence of the terror group the Ku Klux Klan and the carnage exacted against people of African descent, it served as the foundation of the film industry we know today. I’ve reclaimed this title and re-purposed it as a tool to challenge racism and white supremacy in America, to inspire a riotous disposition toward any and all injustice in this country (and abroad) and to promote the kind of honest confrontation that will galvanize our society toward healing and sustained systemic change.[7]

The most popular American movie of the Silent Era, “Birth of a Nation,” and the most popular movie of Golden Age Hollywood, “Gone with the Wind,” both involve the Reconstruction Era. Both feature scenes of attempted black-on-white rape and both feature white vigilantes taking revenge.

Today, it’s universally assumed that both movies were presenting a completely fabricated notion that black liberation at the end of the Civil War led to a period of increased black on white rapes. On the other hand, white people much closer in time to the late 1860s didn’t seem to have much trouble believing these movies in 1915 and 1939.

Since then, however, we’ve witnessed two periods of black liberation that were indeed followed by an increase in rape rates: in South Africa in the 1990s and in post Civil Rights America in the later 1960s (as feminist Susan Brownmiller noted). (Most of the victims tended to black women, however.)

So, maybe the original “Birth of a Nation” wasn’t wholly ahistorical?

But nobody who is anybody believes that. Or at least nobody wants to think about that.

So, Parker was the big personal winner in the Hollywood Diversity hoopla of the last year:

The Birth of a Nation premiered in competition at the 2016 Sundance Film Festival on January 25, 2016.[5] Before it screened, the audience gave a standing ovation to the introduction of Nate Parker.[12] After it premiered, Variety said it “received the most enthusiastic standing ovation at this year’s Sundance Film Festival so far”.[13] Following The Birth of a Nation’s Sundance premiere, Fox Searchlight Pictures bought worldwide rights to the film in a $17.5 million deal.

But then things got a little more complicated.

It turns out that Parker and Celestin were on the Penn State wrestling team in 1999, and both were arrested and tried for allegedly raping a drunk white coed. Parker was acquitted but his buddy Celestin, the co-author of the film’s story, was convicted for joining in.

Parker transferred to wrestle for the U. of Oklahoma, where he took his fateful African-American Studies course. Celestin’s conviction was overturned on appeal and prosecutors declined to press charges again although the alleged victim wanted to testify again.

This incident sounds kind of like the recent Vanderbilt football team gang rape scandal. There seems to be a pattern of scandals that start with drunk coeds maybe wanting to have sex with one jock, but then him letting his teammates have their way with her too.

Perhaps this is a team-building exercise, a way to boost esprit d’corps?

Anyway, since jocks are largely recruited to come to college, administrations should be held responsible when their gladiators run amok among the female students.

But college jocks assaulting coeds is one of those issues that neither Republicans nor Democrats are comfortable with. Republican politicians tend to love college sports, especially state flagship university sports.

And both Republicans and Democrats are extremely uncomfortable about scandals that disproportionately involve black rapists. It’s too much like the original “Birth of a Nation” for modern white people to deal with.

The Daily Beast has the full story of the rape scandal:

The Daily Beast delves into Birth of a Nation filmmaker Nate Parker’s college rape trial—and speaks to the family of the alleged victim, who committed suicide a decade later.

It was no simple wave.

Minutes after bringing down the Sundance Film Festival house with the world premiere of Birth of a Nation, filmmaker Nate Parker invited the “family” of cast and crew (most had tears in their eyes) onstage for helping him land his eight-year opus on the silver screen. During the Q&A, Parker realized he had missed someone.

Jean was Jean Celestin—Parker’s former Penn State roommate and wrestling teammate. The bearded, bespectacled man took his place next to Parker and was praised for co-writing and developing the film about Nat Turner’s slave rebellion that is already an Oscar favorite. They stood there, soaking up the splendor.

But that wave. Celestin had perhaps seen it before.

It was back in August 1999, when Parker allegedly waved Celestin into his bedroom as he was having sex with a Penn State freshman, according to court testimony.

Here are some intriguing Coalition of the Fringes details from the Daily Beast story. First, how the Penn State athletic department handled this situation:

About five weeks after the alleged rape, Celestin and Parker approached two mentors about Jennifer’s supposed pregnancy, according to a written statement Nate Parker submitted to Penn State’s disciplinary board. The wrestlers hoped their life coaches “could give us some advice about Jennifer’s surprise.”

Brian Favors worked at the athletic department and Coach Kerry McCoy had recruited Parker to become a Nittany Lion, later staying on as a volunteer after a new coaching guard led by Troy Sunderland took over the program.

Parker told McCoy that a fling from two months prior had landed the guys in hot water. Parker told his mentor “for some reason she says she doesn’t remember the evening,” according to his statement to the university.

“She knew everything that went on that night,” he told McCoy.

The coach allegedly told Parker to “be very nice to [Jennifer] when she called again,” Parker wrote, and to “try to find out just what she wanted from me.”

McCoy, who is black, suggested that Jennifer, who was white, may have been falsely crying rape because she didn’t want to admit that she’d slept with a black man.

“These things come up from time to time with girls who feel guilty about what they did before, or may even find themselves pregnant with a multiracial child and rejected by their parents,” McCoy said, according to Parker’s statement. …

And, how the Black Students Caucus felt:

The coaches didn’t speak publicly about the rape allegations, but members of Penn State’s Black Student Caucus did.

The case appeared to cause a divide on campus, particularly between women’s-rights activists and Black Student Caucus members.

After Celestin’s conviction, supporters rallied to let him graduate before he was sentenced to jail. The judge tailored his jail term so that Celestin could obtain his political science degree but the move faced protests from victims-rights advocates, the Philadelphia Inquirer reported.

The uproar led to Penn State expelling Celestin for two years and preventing his graduation, according to the Inquirer.

District Attorney Ray Gricar told the student newspaper, the Daily Collegian, that the case’s outcome had nothing to do with race: “The verdict is solidly based on the law and evidence and that’s all—nothing more than that.”

But some students thought a “contentious racial climate” had contributed to Celestin’s conviction, as one caucus member told Collegian.

“Do you really think a black male of color, who is accused of raping a white female in Centre County, can get a fair trial when a jury of his peers are all white except one female of color? That’s a problem,” the student said.

… After police opened an investigation into the rape allegations, Parker and Celestin allegedly launched an “organized campaign to harass [Jennifer] and make her fear for her safety,” according to a March 2002 federal civil suit, launched by the Women’s Law Project against Penn State on Jennifer’s behalf. The suit argued that college administrators favored the athletes over Jennifer after she brought the rape allegations and failed to protect her from Parker and his friends’ reprisals.

The university settled for $17,500 in December 2002, the Daily Collegian reported. Penn State did not respond to requests for comment on the Parker and Celestin case.

The identity of Parker and Celestin’s accuser was initially confidential—she was unnamed in news stories and listed only as Jane Doe in the federal lawsuit—but, according to the civil case, the wrestlers allegedly hired a private eye who splashed an enlarged photograph of Jennifer around campus so students could supply dirt on her.

The charade exposed Jennifer’s identity, the civil suit claimed, and resulted in her harassment on campus. The wrestlers and their pals allegedly “constantly hurled sexual epithets” at Jennifer while trailing her on campus. They also made harassing phone calls to her dorm, the lawsuit claimed.

So you can see the importance to the reigning Coalition of the Fringes to make up hoaxes about white male rapists, like Duke Lacrosse and Haven Monahan. Without constantly ginning up hatred of the straight white male bad guys as their common denominator, how can the Democrats hold their coalition together?

And Republicans don’t want to wreck their favorite college’s chances in sports by worrying about who their coaches are recruiting onto campus with their daughters.