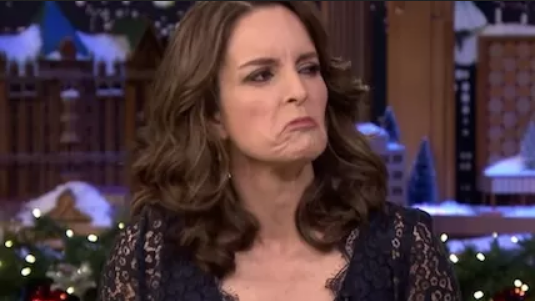 The Revolt of the Comedians: Tina Fey Edition

In the last couple of years, the most respected comedians have increasingly been letting slip that they aren’t all true believers in the Social Justice Warrior dogmas, and in fact many are getting restless under the reigning piety and taboos.

This shouldn’t come as a big surprise — they’re comedians — but few progressives have even noticed.

‘Everyone is telling me what to do, and people are yelling at me about rape and corporate greed and climate change.’

“Halfway through, I was like, ‘This is some real Hollywood bull****,’” she told Howard Stern on Tuesday. “Everyone is telling me what to do, and people are yelling at me about rape and corporate greed and climate change. It’s like, guys, pick a lane.”

Fey was probably referring to Lady Gaga’s performance of The Hunting Ground’s “Until It Happens to You,” which featured survivors of rape taking the stage; The Big Short’s Adam McKay, who called out rich people for buying elections in his acceptance speech after winning Best Adapted Screenplay; and Leonardo DiCaprio, who rambled on about climate change during his Best Actor speech.

““They’re like, ‘We’re going to fix everything tonight.’ Like, you’re all rich,” said Fey. “Why are you yelling at me about corporate greed?”

This not the first time Fey has made such criticisms. She previously announced that she was done apologizing for offensive jokes after some on the left accused an episode of her show, Unbreakable Kimmy Schmidt, of racial insensitivity.

“Let’s face it, actors are very stupid,” she said.

Republicans, resenting Tina Fey’s takedown of her doppelganger Sarah Palin in 2008, seldom notice how much the targets of her humor have shifted to the left. Democrats, assuming that anybody who is funny must agree with them, seldom notice that Fey is one of America’s great noticers.

Fey’s 30 Rock, a sitcom based on her years as head writer for SNL founder Lorne Michaels, is the only show I’ve ever watched straight through. (It took about 8 months.) Over the years the show political / cultural targets became increasingly daring.

My guess is that Fey started out as a middle of the road Democrat and moderate feminist who supported Hillary Clinton. When Barack Obama came out of nowhere to displace Hillary because he was black (but you weren’t supposed to mention that), Fey became more jaundiced about the conventional wisdom. The embargo on joking about Obama in any relation to race must have grated. By the 2012 re-election, 30 Rock was strikingly cold toward Obama.

30 Rock wound up being one of the great monuments to noticing in TV comedy history.