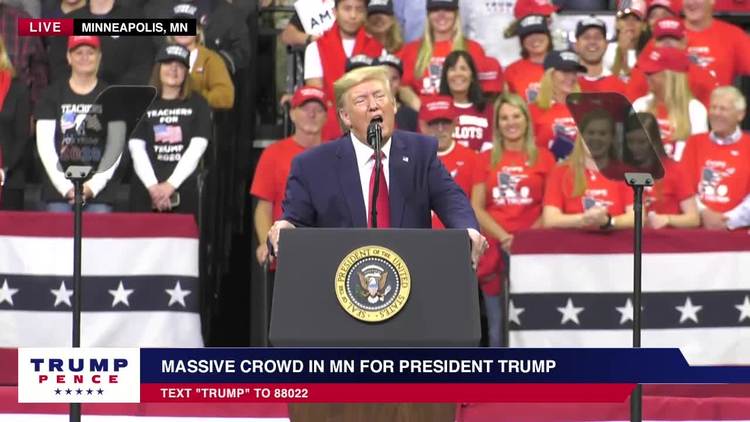 Here's the Factba.se transcript of some of what Trump said in Minneapolis, which has suffered badly from refugees.

As you know, for many years leaders in Washington brought large numbers of refugees to your state from Somalia,[boos] without considering the impact on schools and communities and taxpayers.

I promised you that as President, I would give local communities a greater say in refugee policy and put in place enhanced vetting and responsible immigration control and I've done that.[Cheers] Since coming into office, I have reduced refugee resettlement by 85%, and as you know, maybe especially in Minnesota, I kept another promise.

I issued an executive action making clear that no refugees will be resettled in any city or any state without the express written consent of that city or that state. So speak to a Mayor. You should be able to decide what is best for your own cities and for your own neighborhoods, and that's what you have the right to do right now, and believe me, no other President would be doing that.

If Democrats were ever to seize power, they would open the floodgates to unvetted uncontrolled migration at levels you have never seen before. Do you think you have it bad now? You would never have seen anything like what they want to do but in the Trump administration we will always protect American families first, and that has not been done in Minnesota.

We've also implemented the strongest screening and vetting mechanisms ever put into place. We are keeping terrorists, criminals, and extremists the Hell out of our country, and I want to thank the country of Mexico. The President of Mexico has been incredible. We have now 27,000 Mexican soldiers. They're great and they're tough, and they are now protecting our border and those numbers have gone down like -- thank you, Mr. President.

We will not make the mistakes made in European countries that allow a violent ideology to take root in our country on our shores. We're not going to allow it to happen, and as you all know, to protect our citizens from those who would do harm to us. I instituted a very controversial, very hard to get travel ban on some of the world's most dangerous countries.

When he says the Travel Ban was hard to get, he means that various kritarchs, as we like to say, in the lower courts kept knocking it back for crazy reasons...but the Supreme Court upheld it. Also, Trump didn't say anything about increasing legal immigration.