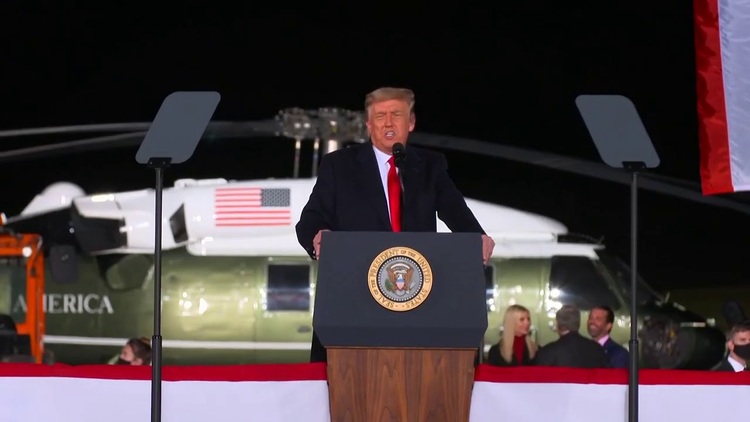 Trump On Immigration In GA: "They'll Throw Open American Borders And Allow Tens Of Millions Of Illegal Immigrants To Pour Into Our Country"

Earlier: Immigration Issue Set To Flare Up In 2021

Here's what Trump said in the Georgia Rally about Immigration, slightly edited from the autotranscript, and with links added:

And you know, what's going to happen, they'll throw open American borders and allow tens of millions of illegal immigrants to pour into our country from every corner of the globe.

They paid for twenty-eight thousand troops along the wall along the border, which we don't need so much anymore. But we built almost 500 miles of wall and they want to rip down the wall. They want to rip down. It's why the numbers have been so great, but now everyone's coming back up because they think this guy's going to win and if he wins it's going to be everything that they could dream for dream up.

If they win this race Democrats will implement nationwide catch and release. You know that as you catch a criminal and you take his name, you say you're released into our country. I ended it. …

They’ll turn our entire country into one giant sanctuary for criminal aliens setting loose tens of thousands of dangerous offenders and putting MS-13 gang members straight into your children's schools.

They’ll allow heroin, cocaine, fentanyl, and other deadly drugs to flood across our borders again and poison our youth.

Cartels telling migrants ‘border will be open’ when Biden takes over, Texas Democrat says https://t.co/3QjfKvyvEj The cartels know that because they read it on Biden's campaign website.

What it means is that the immigration issue isn't going away.